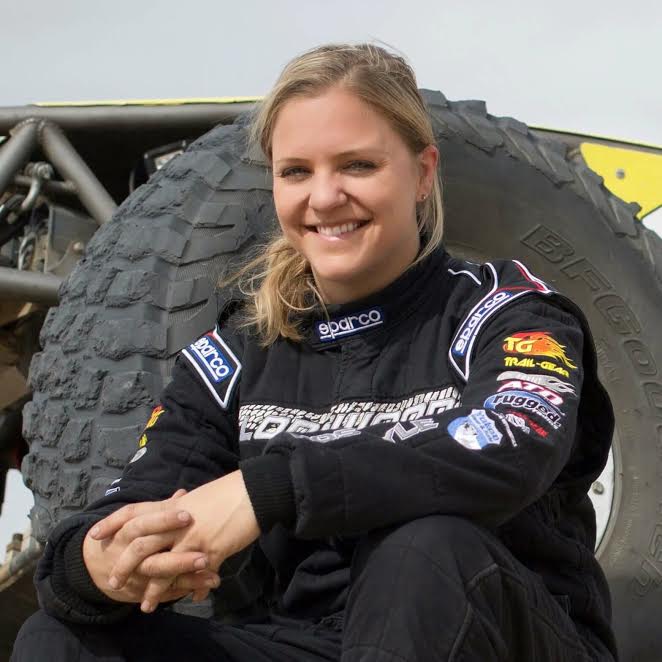 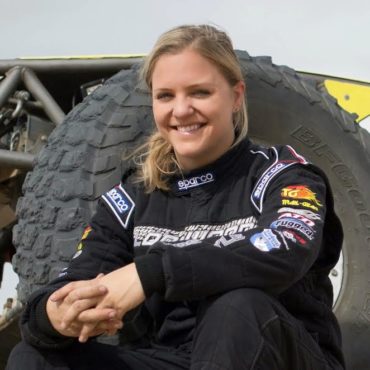 Selected for 2017 Ladies Offroad Challenge Top 10
"Megan grew up competitively showing horses, she then met some friends in college that took her on the Rubicon Trail and she was hooked! She made it to King of the Hammers in 2014 where, long story short, she met her current boyfriend. Together they built a Ultra4 car and finished 43rd in the 2017 King of the Hammers as driver and co-driver. Megan lives on his family almond ranch that also grows row crops, which has helped her be a better crop insurance adjuster. She enjoys weightlifting, Crossfit, tending to her vegetable/herb garden, canning and her two Australian Shepherds."
View Entry Image 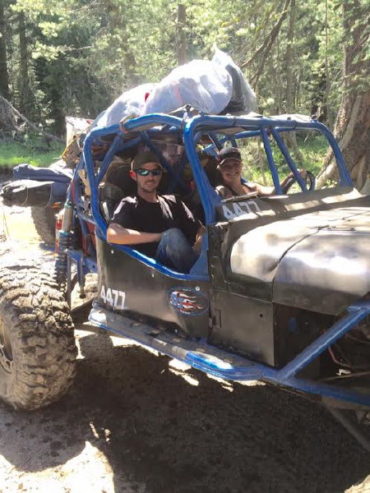 Tell us about yourself:

I was born and raised in Chino, CA. I grew up showing horses competitively, and I spent 11 years participating in 4-H. I bred goats, cooked, organized county events, and I even traveled to Australia for a summer as part of the exchange program. Now I live in the California’s Central Valley (about an hour west of Fresno) on my boyfriend’s (Brian) family ranch. They grow almonds as well as grow a variety of row crops (garlic, onions, seed alfalfa, etc.). Living smack dab in the middle of such a diverse variety of crops has been a wonderful learning experience for me as I work from home as a crop insurance adjuster. For fun, Brian and I race our Ultra4 car together in Ultra4 races, an occasional desert race, and this year we are running in the Nor Cal Rock Racing series. I love learning how to work on the car and the time spent together in the shop. Outside of racing I spend most mornings at the gym as I really enjoy weightlifting and Crossfit. I love playing with my Australian Shepherds Ruby and Zeek. I have a huge vegetable/herb garden which I am constantly working in, and I have recently picked up canning as a way to preserve what we are growing.

How long have you been offroading?

I’ve been off-roading for about 10 years, give or take, and I have been racing for a year. 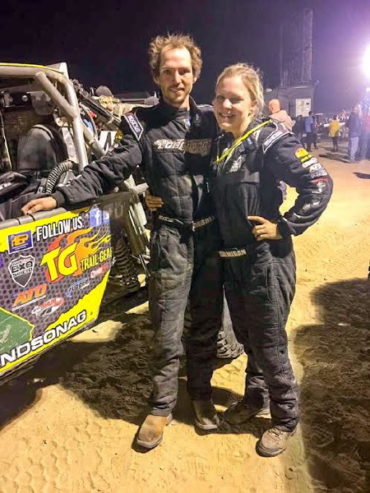 How did you get into offroading?

I got into off-roading when I met a group of friends in college who were really into it. My first trip was to the Rubicon, I was instantly hooked. We made numerous trips to the Rubicon as well as Fordyce. I remember when the idea of King of the Hammers started floating around on Pirate 4x4. My friends and I would spend hours sitting in their garage trying to figure out how we could make it there to watch. I finally got my chance in 2014. It was totally different in person than just looking at videos and pictures; it was awesome and I completely fell in love with it. I ended up going with a different group of people and we camped with a group that included Brain’s Dad. I ended up meeting Brian through him and a year later we started dating. Brian is how I got into racing and I am now his co-driver. We have a great relationship working, teaching, learning, and accomplishing together.

Tell us about your vehicle:

I actually don’t have a vehicle that is ‘mine’. My boyfriend and I share our racecar together. The racecar is affectionately called the ‘Farmer’s Daughter’. She is a 2013 Top Shelf Trent Fabrication chassis with a GM 414 iron block assembled by Faucet Race Engines, a TH400 trans built by ATO Performance Transmissions, Trail-Gear Rock Assault housings with Yukon Gear and Axle parts, 10-inch ring gears front and rear, Fox shocks, BFGoodrich 39-inch KR2 tires and Trail-Gear 17-inch Creeper lock wheels. Brian and his family have been involved with wheeling for a long time and have several Jeeps and buggies. The one Brian built started as a 1989 Jeep Wrangler YJ, but it has been modified quite a bit over the years which has earned her the name ‘Black Hole’. When Brian and I started dating I adopted her and spent several months cleaning her up, and I have done the majority of the maintenance and repairs since then. She has a LQ9 6.0 GM motor, TH400 auto trans, Chevy Dana 60 front axle with full hydro steering, ARB locker and chromoly axles, a GM 14 bolt rear axle with 300m axle shafts and full spool, King Shocks, BFGoodrich 39-inch KRT tires (used race car tires haha) and Trail-Gear 17-inch sectional Creeper lock wheels. 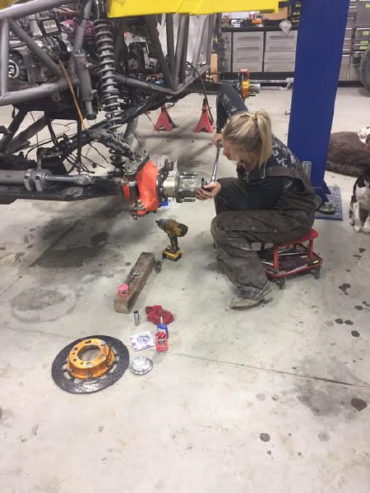 What has been your favorite offroad experience?

I think my favorite off-road experience is our summer camping trips up in the mountains. There’s something about packing all your stuff into the Jeep, wheeling into a lake, and relaxing in the cool air. There’s not too much that beats all that.

What was your most exciting offroad achievement?

My most exciting off-road achievement by far was actually finishing the King of the Hammers this past year. Brian had never finished King of the Hammers before, and it was only my 3rd race as a co-driver. I had done the majority of the prep work on the car for our last 2 races with zero prep failures or problems, I can’t tell you how shocked and unbelievably proud I am of that. In less than a year I went from only knowing the bare basics to being able to disassemble and prep almost the entire car by myself. Honestly I wasn’t even sure that I could do it. I constantly doubted my abilities, but with a little skill and a whole lot of stubbornness, I DID IT! Afterwards in our race recap, Brian said that I ‘kicked butt in the rocks and out in the desert. Between winching, spotting, GPS navigation and keeping me level headed, she’s a rock star co-driver.’ Talk about a big relief! Those were all things I worried and stressed about. At the end of the day I got it done. We finished 43rd out of 123 cars that started the day; only a total of 50 cars ended up finishing the entire race. When we made it across the finish line, I cried. It was awesome! 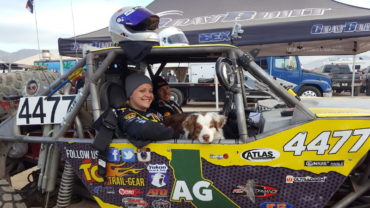 What excites you about offroading?

What excites me the most about off-roading is definitely the racing we do. There isn’t much that beats the adrenaline rush you get when you are in the car right off the line and chasing down cars in the dust and passing them. I think more than that for me is the accomplishment. It’s exciting for me to learn new things that enable me to take the car apart and put it back together, and knowing that if something does go wrong I have the ability to fix it. 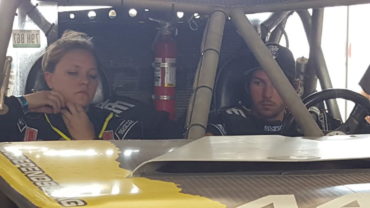 What do you think is the most challenging aspect of offroading?

I think the most challenging aspect of off-roading is pushing the limits of your vehicle to see what it can do, but then also being able to fix it if something breaks down. It has always been challenging for me to determine what broke, but the more I learn the better I am getting at the troubleshooting process.

Which aspect of offroading do you think is the most fun?

I think the most fun part of off-roading is the camaraderie. The off-road community is like one big family. People you don’t even know will stop to help you and stay until you are good to continue on your way. Regardless of whether we are racing or out on the trail everyone is friendly and more than willing to help you if you happen to break down. 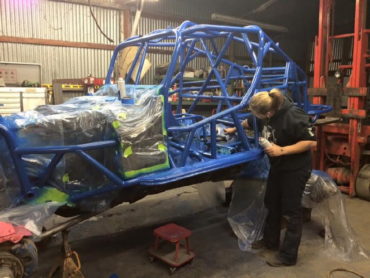 What does prepping for an adventure look like in your world?

When it comes to prepping for a race I spend 4 to 5 days a week in the gym. The 8-plus hour desert races are exhausting, then you add in all the tire changes, driveshafts, maintenance, etc. and it is just physically grueling. As a girl we are physically at a little bit of a disadvantage, so I do the most I can to work on my endurance and strength. As for the car, Brian and I go through every single bit of the car before a race to make sure that nothing is broken or damaged in the least, then make all the repairs as needed. When it comes to our camping trips, there usually isn’t a whole lot of prep. Friday afternoon comes and one of us says, ‘let’s go’! So we grab our camping box and an ice chest, go to the shop, load up the Jeep, stop by the store on the way out of town to get our food and drinks, and then head off to have a great weekend! 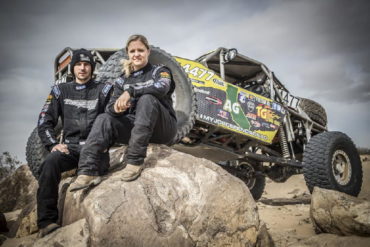 I’ve ALWAYS wanted to go watch the Baja 1000. When Brian and I started racing together we’ve daydreamed numerous times about racing Baja as well as Vegas to Reno and the Mint 400. I would also love to go to Moab someday too!

Tell us about who you go offroading with:

When it comes to racing we pit with the Trent Fabrication team headed up by Dave Schneider. Dave took Brian under his wing when Brian first started out, and the two of them have always split pit crews. We help pit for Dave’s team during the 4800 race and they pit for us during the 4400 race. When it comes to recreational/camping there are several groups of friends that we go with but usually it’s Brian’s dad Doug, Brian, and myself. 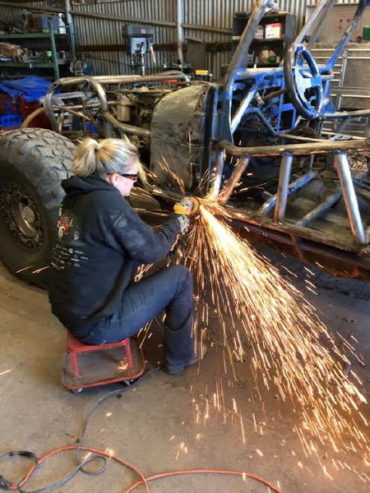 What is a piece of advice you have been given that you instill in your offroading adventures?

Difficult roads often lead to beautiful destinations.’ I don’t know that this is necessarily a piece of advice, but I love the quote because it is a great reminder in everyday life as well as off-roading.

Do you have anything else you would like to add?

I would like to thank Brian, for his patience, unwavering support and belief in me and my abilities. I couldn’t imagine where I would be without him. A big thank you to my parents who come to every event/race, who are always willing to help in any way possible, and are always encouraging me to excel at whatever I want to do. I’d also like to thank Brian’s parents who never complain about us coming and going from the shop at all hours, who always offer to help, and allow Brian the flexibility for us to do so many awesome things. A big thank you to everyone who said so many nice things during the votes of confidence; I am still blown away! And of course, thank you to all the sponsors: Yukon Gear & Axle, ATO Performance Transmissions, Trent Fabrication, Fearless Gear, Rugged Radios, Trail-Gear, Cansonic Ultradash, RB Welding, Genius Tools, Hostyle, Ryan Del Ponte/The Redline Projects.

Click here to see all the 2017 Ladies Offroad Challenge Entries.