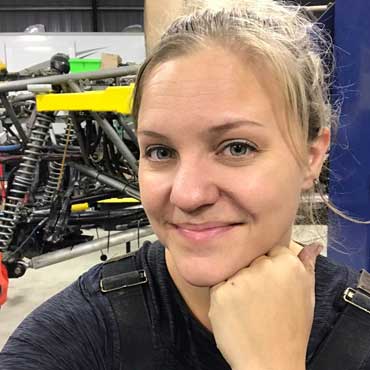 King of the Hammers Lady Driver Bio for Megan Stevenson 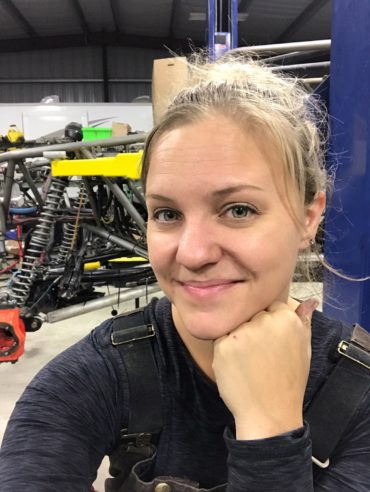 How do you know your Driver?  Brian is my boyfriend. We met in 2013 at King of the Hammers and have been together ever since. We were friends for a year before we started dating in 2015.

How did you get into Ultra4 Racing?  I used to hang out with a group of friends during Hight School and College that rock crawled. I would either have to go with them or stay home, so clearly I chose to go with them. We would go to the Rubicon Trail, Fordyce, and other trails in the Sierras. I had always heard about King of the Hammers and had wanted to go.  I finally had my chance in 2013.  It was totally different in person than just looking at the videos and pictures - it was awesome and I fell in love with it.  I had gone by myself, but I was camping with a group that included Brian's Dad.  I ended up meeting Brian from him and a year later we started dating. 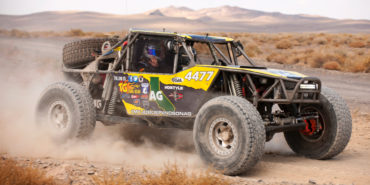 After 2016 King of the Hammers, Brian's and his co-driver decided to go separate ways.  Brian wanted me to be his co-driver so we sat down to talk about the pros and cons, and if we could do it together.  We decided we could as long as we set some ground rules:
1. What happens in the car stays in the car.
2. If one gets upset or frustrated and snaps at the other, we have to let it go.
3. If we aren't having fun anymore, we aren't going to do it anymore.

After that decision, we immediatly pulled the car apart to the bare chassis to prep for the next race.  I got to learn everything from start to finish.  I was able to do it and I still help work on the car.  We have a great relationship working, teaching, learning and accomplishing together.

What has been your most exciting achievement in Ultra4 racing?  We have raced a few Ultra4 races this year, but Falon 250 stands out.  It was a wild race with the thickest dust you could image, I could hardly see Brian on the other side of the car.  Everyone was having tire issues, we were no different.  We killed 4 tires and 3 wheels, and had never talked about tire changes.  I was learning on the fly and we were doing the best we could.  The Falon 250 is a lap race with a cutoff time for the final lap.  We made it past the green flag one minute before the cutoff time.  We finished 28th out of 57 and were the last ones to actually finish all 6 laps. It felt really good that after all that, we were still able to finish 6 laps!

What does race prep look like in your world?  I spend 4 to 5 days a week in the gym.  As a girl, we are physically at a little disadvantage, so I do the most I can to work on my endurance and strength.  The race is physically beating for 8 hours, muchless tire changes, driveshafts etc.  I cleaned up my diet using managed meals from Trifecta Nutrition follwing Renaissance Periodization and have lost about 25lbs since July.  I take care of most of the sponsorships, apparel and anything behind the scenes.  As for the car, Brian and I are the only ones doing prep on the car. 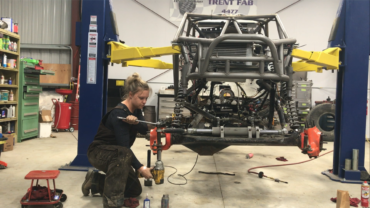 What are you looking forward to at this year's King of the Hammers?  Seeing everyone!  This is the one race a year where everyone comes to the race.  When we have had our nose stuck in the car and been working our regular job for what seems like months, by the time King of the Hammers comes we are ready for some socialization.  It is also amazing to see all the different types of people and rigs.

What excites you about racing? "D. All the Above"  The adrenaline rush you get when you are in the car right off the line, chasing down cars in the dust and passing them.  But really, I think more than that for me is the accomplishment.  Being able to take the car apart, put it back together and nothing failed.  If something does go wrong, being able to fix it.   I also really like the comrodare of the teams - before and after the race everyone is really nice. 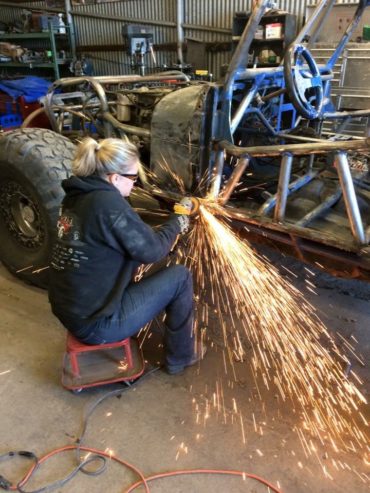 hat is a piece of advise that you have been given?  "Why be ordinary when you can be extrodinary"  I have always hated when someone told me I couldn't do something because I'm a girl.  I've always had the "I'll show you" attitude.

Tell us about the Team that Supports you.   Our team consists of both sets of parents and close friends.  Some of those friends aren't even at the races, but understand that we disapper during this time of the year to race and then come back to socialization in Mid-February.  Dave Schneider took Brian under his wing at the beginning and the two have always split pit crews along with some guys from TrentFab - we pit for Dave's team on Thursday and they pit for us on Friday.

Megan Adds:  I'm super excited and nervous about King of the Hammers this year. It seems like it was yesterday that my friends and I were tinkering on their Toyotas dreaming about being able to come watch this race, and now not only am I going to be there, I'm going to be IN IT. It blows my mind. I always knew racing was expensive, I just never really realized how expensive until I started working with Brian, but it's been amazing to learn about and see the generosity of sponsors and people I/we have met being in racing. Without them, we wouldn't be able to pull this off. It's pretty awesome. Speaking of sponsors... Are there any wineries out there who want to get into sponsoring off road racing?? If so, I'm totally their girl. I excel at quality control. Just kidding. Or not. 🙂