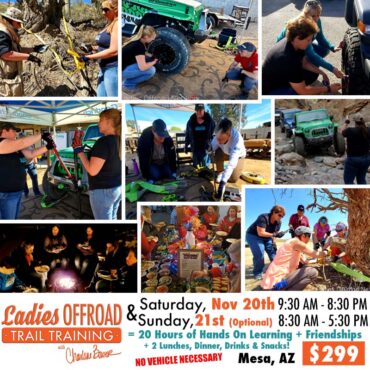 Charlene is SO EXCITED to be able to offer the Trail Training Class, with a bonus dirt day!
Hope to see you soon!

Join us for 2 full days (20 hours!) filled with exciting and motivating hands-on offroad training. This is a great opportunity for drivers and co-drivers of every level, beginner to advanced. Bring your gloves and get ready to work on offroad challenges while having fun!  No vehicle is necessary. A vehicle and tools will be provided for Saturday. There will be passenger seats for Sunday.  Space is Limited to keep it personal.

Recovery skills will include

Then we will talk about Driving Techniques

Day 2 is optional where you can join me for a day in the dirt to apply what you learned on Day 1. It will be a casual fun day with other ladies.

**​ Refunds are available up to 2 weeks before the class starts. Otherwise monies go into credit for future experiences with Ladies Offroad Network.

Registration will ask you questions about Food and Drink preferences.
Confirmation Email will be sent immediately upon signup with more detail on what to bring, etc.

You will be asked to sign a waiver that includes the paragraph: "I have come to this event under my own free will and understanding of any inherent COVID-19 risks. I have come to this gathering knowing that I am not infected or a transmitter of COVID-19. I understand I have been provided face masks, hand sanitizers, Kleenex and multiple disinfecting stations."

We are not requiring masks be worn, but you are welcome to if that makes you feel comfortable. We want you to be as comfortable in this new world as you can be. All activities will be held OUTSIDE.

Hear it being talked about on LIVE@5

When will we see you?

Any Questions can be directed by Email to Winning@BowerMedia.com or Text/Call 480-490-2019

Built for Any Vehicle

It doesn't matter what kind of offroad vehicle you drive, you are welcome to join us!! You do NOT need a vehicle either day, but especially not on Saturday - leave it at home. We will be working in a closed environment with all the tools you need available. (Just bring gloves!)

If you join for Sunday's trail adventure (optional) you can either drive or tow your vehicle to the staging area. We will be coming out to the same location to load up your trailer, if necessary. I ask that you do a proper pre-check of your vehicle so we can avoid any challenges for the group.

If you are flying in, are usually a co-driver, or don't have a vehicle yet, you can still join us on Sunday as a passenger. Trust me, you will have a GREAT time jumping between vehicles! No Stress!

The unspoken best part about the Trail Training classes is getting to know other ladies that are JUST LIKE YOU! Girls that don't mind getting dirt under their nails and wanting to learn about offroading. It is a great time to meet new friends ~ some we have watched grow into long-term friends over the last few years!

And We Eat! While you are with us, we will host you in our fancy style. You will have multiple drink options and snacks all day. Lunch will be provided both days and Dinner / Dessert on Saturday night! When you register you will be asked if you have any food allergies so I can design the perfect menu for the group!

SHOPPING! We have a full store set up that you can shop on Saturday. It has Youth and Adult (Newborn to 4XL) Ladies and Mens Tshirts, Sweatshirts and Long Sleeve Shirts. Dog Shirts, Onesies, Hats, Beanies Jewelry, Color Street Nails, DoTerra Oils and of course our entire line of Ladies Offroad Network clothing that we can make on the spot for you! 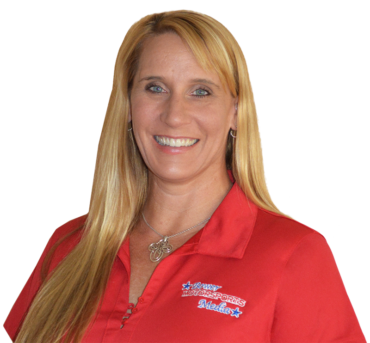 Charlene grew up in an off-roading family, enjoying annual trips to Dumont Dunes, the Rubicon and other iconic off-road destinations. Charlene's first job was changing dirt bike tires at a motorcycle shop in Northern California.  She worked upper retail management at multi-line Powersports dealerships for 11 years and in magazine media for 4 years before founding Bower Motorsports Media in 2009.  In just nine short years she has built a media empire using trending media and communication platforms supplying the backdrop for some of the most successful racers, events and companies in the 4x4 market. Filling needs, she has built brands that include the online talk show Bower Power Hour, Race Team Store online marketplace, I'm Not Just A Girl clothing and jewelry line, Ladies Offroad Network website and events devoted to women offroaders, and Offroad Marketing School for online education.
Charlene doesn't spend all of her time behind a desk, she's actually a dirt bike rider, hard core wheeler, and the first female member of the Arizona Undertakers 4x4 club. In 2014 & 2015, she earned the title of "Fastest Girl Up Backdoor" at the King of the Hammers Backdoor Shootout.  With different contest winners in her co-driver seat in 2015, her team took 2nd in RallyVenture and in 2016, they placed 1st in the Rebelle Rally and 2nd in the Pro Class at 36 Hours of Uwharrie.
Charlene has been recognized by BFGoodrich Tires as one of their Performance Team Members.  She was voted by peers as an Off-Road Motorsports Hall of Fame Industry Rising Star in 2016 and received the Off-Road Motorsports Hall of Fame Impact award in the Advocate Category in 2018 for advocating for ladies. In 2017, Charlene obtained her training certification from the International 4-Wheel Drive Trainers' Association.  In 2018, Charlene continued her education path earning her Wilderness First Aid certification. Starting in 2019, Charlene was nominated and selected to sit on the SEMA Businesswoman's Network Select Committee.
Charlene champions for women in offroad.  In 2016, Charlene hosted the 1st annual Ladies Co-Driver Challenge. The wildly successful contest had entries from 91 women wheelers across the Country, vying to have an opportunity to go on the road with Charlene to some of the top events in North America utilizing the BFGoodrich Tires Jeep which stemmed the creation of Ladies Offroad Network that is now International with Chapter Locations across the countries.
"I am honored to have had the opportunity to work in different segments of the offroad industry for 25 years!  I am enjoying the opportunity to give back with my knowledge - helping racers be more successful off the track, enthusiasts be more successful behind the wheel, and businesses gain unique media exposure."
READ CHARLENE's FULL BIO

Pictures From Past Events

Here are some pictures from past events so you can see the fun that we have! 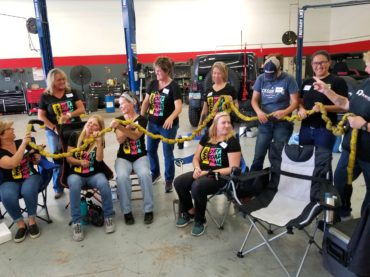 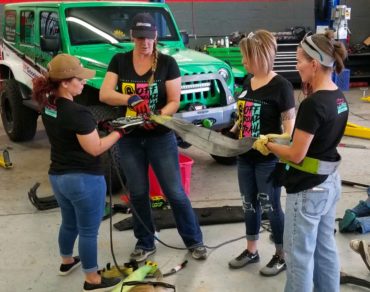 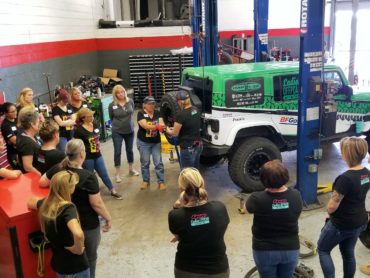 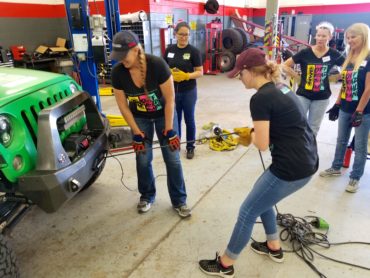 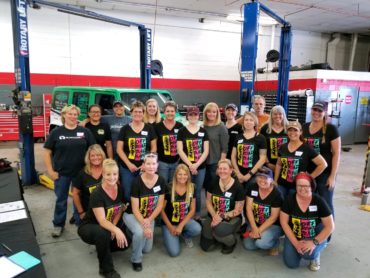 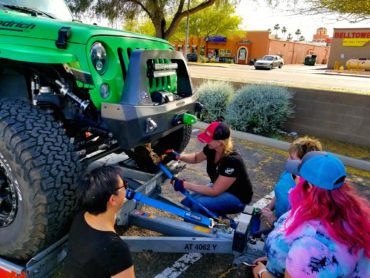