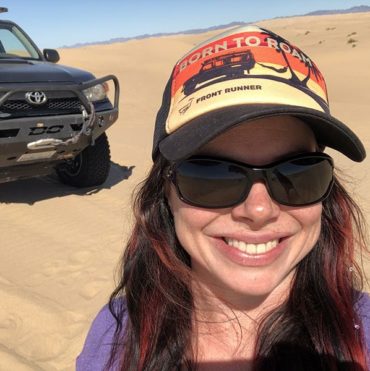 My journey into offroading started by ditching a bad cultural tour of New Orleans’ Voodoo history and running with two other tour-truants down a grungy French Quarter street. One of my new friends, Mary is dressed convincingly like a 1960s housewife, with a wide a-line skirt and a crinoline. When not dodging cobblestones in 3 inch heels, she’s working on an app for theaters. Just in front of us is Vish, who’s starting a yak clothing line with his brother. He’s looking at his phone, reading out texts from his brother, “He says his jazz tour is just behind that parade.” I’m having a slight problem catching my breath as I walk up to the tour group and exclaim to a tall, red-bearded man (seriously is this man a viking?) who catches my eye and I exclaim, “I’ve been looking for you everywhere.” 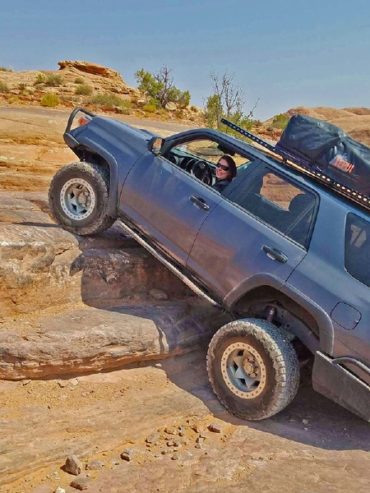 I told my office I was going to New Orleans for a conference. There was one, abound with tech geeks talking about apps and how yaks naturally shed their fur so it should be considered vegan. But I was enamored with this tall man who was talking about hardware engineering. For 6 days we wandered around New Orleans together while avoiding tripping over Mardi Gras beads and inhaling cloying clouds of beignet sugar. We talked about working on houses (me), trucks (him), he passively mentioned I should come out to California so we could go ‘rock crawling on the Rubicon’. 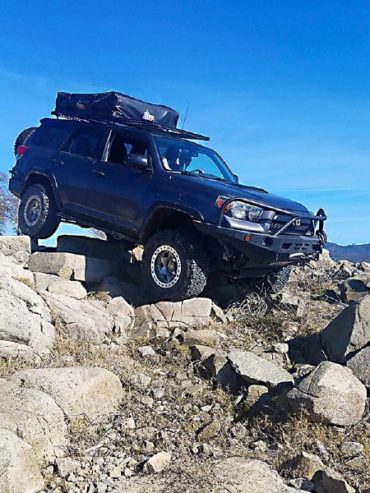 Three weeks later I load into my tiny, impractical for camping or long road trips, but very sporty Volkswagon GTI and drive 770 miles from Seattle to Sacramento. 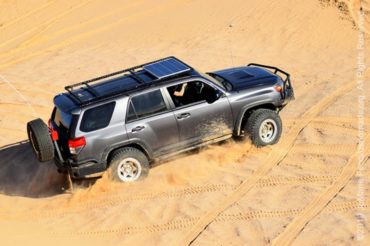 Let’s talk a moment about “The Wrong Car”.

Perhaps it’s like a friend who you know has “The Wrong Boyfriend/Husband/Job”, but you just can’t tell her. Sometimes you can’t tell yourself. Before this GTI, I’d always had trucks. Cheap, rust-eaten, falling apart trucks. I grew up 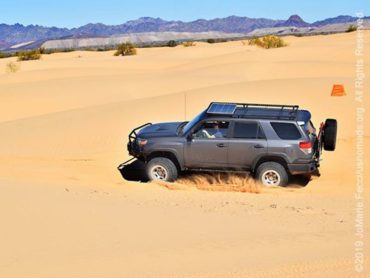 in Alaska, full of wide open spaces and ditched-edged roads. Trucks will take you to the end of that road, and flat beds loaded with salmon will drive you to the cannery. But the trucks I owned were always equally horrible and affordable. The first truck I ever bought cost me $100 and had no brakes. It took me a week to convince the seller that I wouldn’t call him when it broke down. Thankfully the truck ran so poorly that downshifting slowed it down enough to make corners. 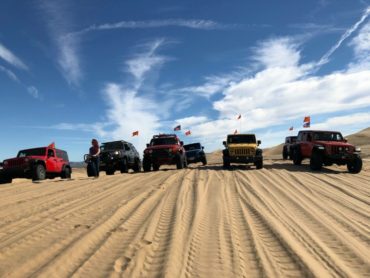 I moved to Seattle because it was the first stop on the ferry and my truck broke down before I could make it over the Cascade Mountains. Then I got myself a city car, which was absolutely fine when parked, and it had a red interior dome light that made me look cool. I tried to take it out to the mountains and go for a hike but instead high centered on a small log blocking all traffic. It took four beer-swilling Subaru drivers armed with hiking sticks, scissor jacks, and warm cans of Rainier to get me unstuck. After that I took up more sensible weekend hobbies like, home remodeling, or brunching. 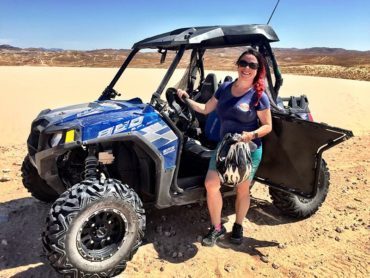 An adventurous woman can only brunch so much before she’s had enough. So, I took that tiny, but fuel-efficient car to California to learn about wheeling. We loaded up in the Viking’s 4runner and took off for the mountains, and I learned a few things almost immediately.  One: I have no idea what I’m doing with my life.  Two: Things will not go as planned, but you will just have to work around them.  Three: I miss trucks. 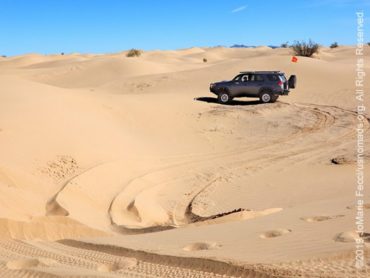 As a woman who’d spent the last few years in a vehicle that winced at potholes, I was absolutely terrified of what a rock would do to a car. Growing up I though 4WD was what you used when you wanted to unstuck yourself to get home. Not purposefully go up a 5 foot tall rock wall! I’m trying to play it cool while getting choked by the passenger seat belt, thinking about the next rock, and the next, and the one after. Then there’s the crack of something under the truck. Something important. I learn about field repair, how having the right tools can save you from hiking out for help (or relying on Subaru drivers), and why you would want to let some air out of your tires. It was scary, but every bit had a work around. An idea started to form in the back of my mind. Maybe I could go places and rekindle my adventurous spirit if I had the right tools and knowledge? 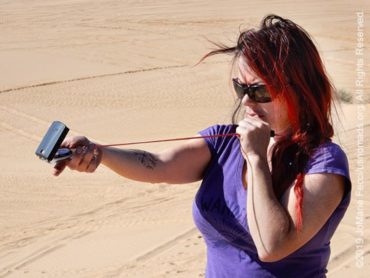 Back in Seattle I found my truck while late-night Craigslisting. A beautiful, pristine, 2011 Trail Edition Toyota 4runner. Oh man, was I in love. I started thinking about how I would make her mine. Could learn to be capable of accomplishing obstacles on my own? Could we go camping together and actually fit both a sleeping bag AND food in the same vehicle? I started to go on adventures that involved offroading, such as renting side-by-sides in Las 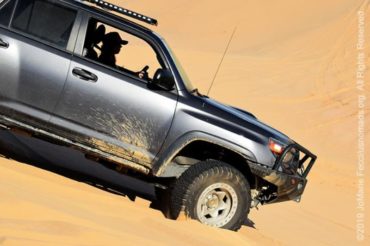 Vegas with my sister. It was so different than anything we’d ever done before. I loved drifting around in the sand and it reminded me of winter driving in Alaska. It was as if a whole new world opened up, and I wanted more. 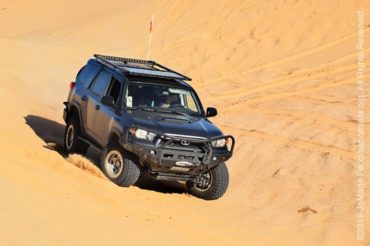 Now that I had a project we could work on together, I began visiting Sacramento more often. I knew I didn’t know how to make this truck great on my own, and that I didn’t want someone else to do all the work. I watched the Viking install one side of the lift kit and I put on the other side. We changed out the tires, added new bumpers. Nestled together underneath the truck we passed tools to each other while taking turns mounting the skid plates. It was dirty and romantic.

I learned about Overland Expo and drove to Asheville in October 2017 in a rental car. I hadn’t been behind the wheel much yet, and I knew I had some confidence to build when the Viking wasn’t around to make me nervous. I took a couple of classes given by 4x4 center in Vermont partnering with BF Goodrich. I learned why you’d want to hit the gas if you’re sliding downhill, and why you’d brake with your left foot. I also learned about a little race called the Rebelle Rally, but I figured that was for much more experienced women.

I named my truck Luna, and we continued going on adventures together. I tried welding projects, but was mostly too scared to build anything that required structural integrity. Before I’d started offroading I assumed I had to be good at everything. But through the process of learning that there’s a lot I don’t know, it’s opened me up to the freedom to let myself enjoy and get better. I could feel the limitations of my body, probably from years of unfettered brunching, and Luna and the sport of offroading made me want to be as strong and capable as I could be. I took up surfing and tried rock climbing. I learned that I could fail at things, but focus on technique or the next rock, and then the next. I was doing something I’d never really done for myself, and that was making goals for the active life I wanted to live.

I bought a ticket to the Ladies Offroad Network convention in Utah; I was terrified because I didn’t know anything or anyone. I wanted to learn, and that kept me determined and focused. This convention was such a mind-expanding experience. So many women from everywhere, who were cool and fascinating and kind. These women weren’t going to make fun of you because you were less capable or more fearful. In three days I met many women who had been in the Rebelle Rally or took an overland journey to South America and were convinced that any one of us could do those things too.

At that convention, surrounded by an amazing, supportive atmosphere, I decided that I would sign up for the Rebelle Rally. I wasn’t ready: I had no driving or navigation skills and didn’t have a partner. I came up with a lot of excuses, but I wanted to have those skills and that adventure. The following week I began training myself for offroading with some amazing trails in Moab. As soon as the registration for 2019 was open I signed up.

Once I signed up for the Rebelle Rally, I had a focus. I took Charlene Bower’s Offroad Marketing class, and a couple months later visited Glamis to learn how to drive in dunes with Nena Barlow. I’m inspired greatly at how cool and knowledgeable they both are after years and years of experience. I left the dunes and within a week I had a new sponsor (thanks Toytec!) and a partner for the Rebelle (Hi Joanna!).

I look back to myself a few years ago and I’m very proud of how running down the right street for the right reasons can change absolutely everything. I am ready and looking forward to seeing where this great adventure (and Luna) takes me.