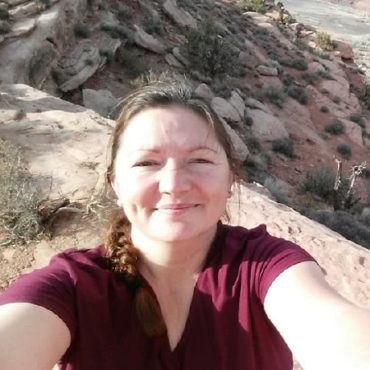 My first trip to Moab was twenty years ago. It doesn’t seem that far away. I still remember it vividly. We drove in through the canyon on Highway 128 in the dark. There was a big piece of metal covering a hole in the road; only it had fallen into the hole. The lead vehicle was already in the hole before they saw it. By the time they had their truck and trailer back under control and grabbed the CB mic to warn the rest of us, we had all gone through the hole. 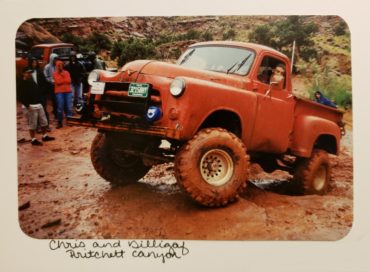 We set up camp along the Potash Road in the dark. We woke up in the dark, in soaking wet sleeping bags from a big rainstorm. We built a fire in the rain, in the dark, so that we wouldn’t freeze to death. In Moab. In June. As daylight slowly crept in, I said a silent prayer, thankful that there had already been someone camping in the sandy spot I had eyed the night before. Unfortunately for that camper, what had been a nice sandy spot at the base of a massive rock wall, was now a waterfall. All of their gear was floating downstream towards the Colorado River. 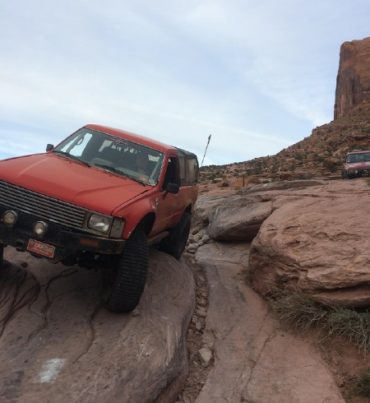 I had never seen rock so red. The canyon walls were so high and steep. I stared across the river to the canyon walls on the other side and couldn’t even fit the entire scene into the frame of my camera. Moab in general is a breathtaking sight. Moab in the rain is almost indescribable. Dry washes become creeks, waterfalls pour off of the canyon walls, the Colorado River flows in stripes of red and green. It is a truly spectacular scene. 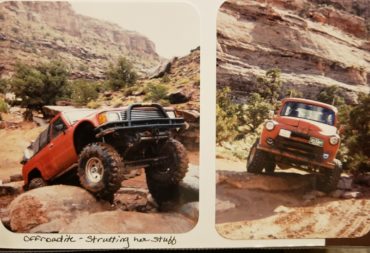 The first trail we went on in Moab was Pritchett Canyon. I didn’t know it was a dry canyon at the time. I took dozens of photos of the waterfalls. Somewhere throughout the day I lost my roll of film, never to be seen again. On a rock pile, my boyfriend (now husband) broke his truck. Now to be honest, this was his first experience in building a rock crawler, but I would rate the build as sketchy at best. It was a 1953 Dodge pickup that had been shortened and put on a Chevy Blazer frame. I’m fairly certain that it had parts on it from nearly every make and model of vehicle known to man. It was definitely a broke college student build, cobbled together from whatever bits and pieces he collected at the local pick and pull. Its name was D.I.L.L.I.G.A.F. and the name rang pretty true. 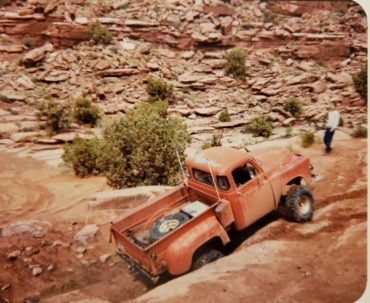 Regardless; at the rock pile, through a series of unfortunate events, the transmission became separated from the transfer case. The bolts just stripped right out of the casing. It was not something that we could trail fix. What we really ended up doing was dumping every last bit of ATF we could come up with into it, and limping it off of the trail. For whatever miraculous reason, when we got to the Rocker Knocker, as the Toyotas that were with us were preparing to tow this big, lumbering beast up over the obstacle, it actually climbed it on its own. Eventually, at the end of a long, wet day we emerged from the canyon. Our friends hooked a strap to their 4Runner and towed us all the way back to town. We spent the night trying to rebuild an automatic transmission, on a trailer by lantern light under a tarp that shielded us from the rain. We were not very successful. 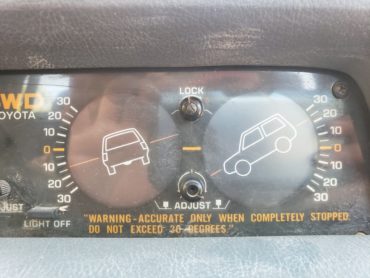 We spent the next few days riding in other vehicles with friends. One of our friends wasn’t going to be able to stay for the entire week, but had really wanted to drive up the Rim before she headed home. I feel like now may be a good time to tell you that I don’t like heights. Not even if I’m standing on my own two feet. But, as it turns out, I am particularly disinclined to heights when they are off-camber. I would love to tell you that at this point in my life I was an experienced off-roader; but I wasn’t. Even though I had been going off road for my entire life, I had only gone as a passenger. To be completely honest, this trip was the first time I had even been rock crawling. Everything to this point had been trail wheeling, or snow bashing, or mudding. None of which involved skirting up the side of a very large cliff while leaning towards the Colorado River far below. I rode passenger on the Rim with my friend in her 4Runner. 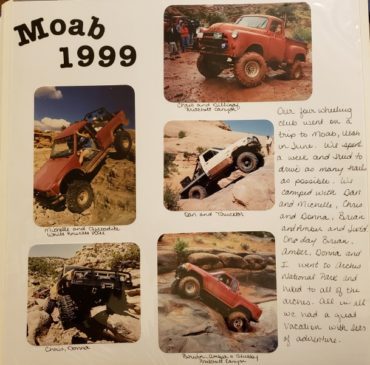 A fun fact about first gen 4Runners, they have a gauge cluster on the top of the dash consisting of an inclinometer that tells you your angle side to side, another one that tells you your angle front to back, and an altimeter that tells you how high above sea level you are at. They also tell you that in a non-modified 4Runner that thirty degrees is the tipping point. While I am certain that the feature was put there as a safety measure, it did little to calm my nerves along the way. Actually, if anything, I think it made me worse. Instead of watching out the window at the perilous cliff edge on the driver side, I was watching the little picture of the 4Runner on the inclinometer bobbing along uncomfortably close to the thirty-degree mark. When we arrived at the top everyone got out to admire the overlook. I admired it from a distance. 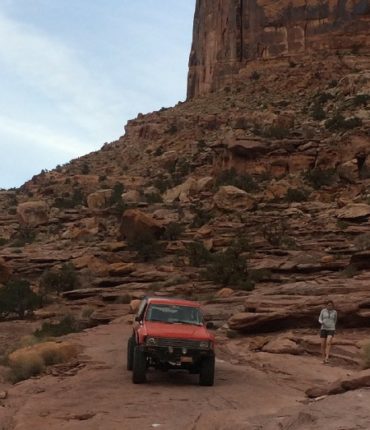 When everyone was done visiting and taking pictures, we got in the vehicles and started making our way back down. As it turns out, I liked being on the downhill side of off-camber less than I had liked the uphill side. I instinctively sought something to grab onto with my left hand. All I could manage was the back of the driver’s seat. I begged her to stop and let me walk. She told me she couldn’t. I noticed the inclinometer, thirty degrees. I looked outside, and there was a rock we had to go over with a drop on the downhill side. If you have been on the Rim you know the one. My tension was rising. As we dropped off of that rock, I swear, absolutely swear, that I watched the little picture of the 4Runner roll over inside the inclinometer. I wanted to puke. When we arrived at the bottom, I realized that I was still holding on to the driver’s seat-back. I also realized that the 4Runner had manual door locks, and that I could have let myself out at any time. 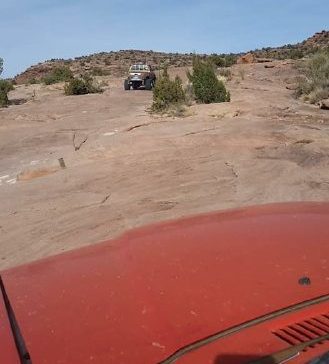 In a perfect world, this is the part where I tell you that I had a great time, and then moved on in my life. But that isn’t what happened. What really happened, is that I let my fear get the best of me. For nearly twenty years I didn’t go back. Sure, I went to Moab again, but not on the Rim. When my husband and friends would go to the Rim, I stayed home. I didn’t ride. I didn’t walk, I didn’t drive. I stayed home.

In March of 2018, I went to Moab with a girlfriend. She was dating a guy that had a Jeep, and she wanted to try four wheeling once before going with him. She wasn’t sure if she was going to like it or not. We went to Kane Creek and had an amazing time. She asked if we could go to an overlook and immediately my husband said we could go up on the Rim. I wasn’t convinced. He promised that I would be ok. We headed over to the trailhead. I looked up the trail and tried not to tear up. I put on my brave face for my friend so that she wouldn’t be as scared as I was. When we got to the rock, she asked if we were safe. I told her we were. Then I 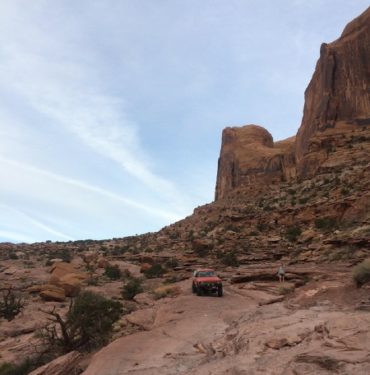 swallowed my fear and followed my spotter’s directions. We made it. At the top we got out, admired the view from a distance and took some pictures. On the way back down, my friend asked me to let her out at the rock, and I did. At home that night, I looked through the few pictures that I had taken, and none of them gave me more pride than the selfie that I took at the top. The picture isn’t that great from a photography standpoint, but it signified me finally facing my fear. 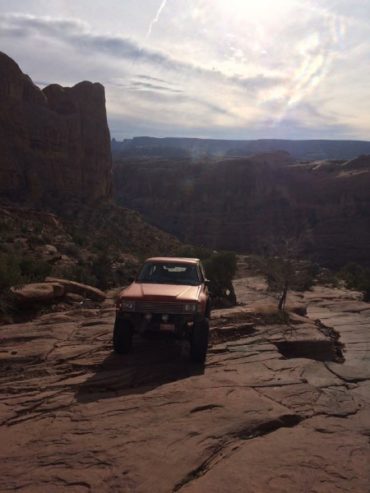 I have come a long way since my first Moab trip. I have grown, learned. Over the years I have been on several trips of various levels. I have driven, been a spotter, competed. I have been a passenger. I have been in a rollover. I still feel nervous by cliffs or in off-camber situations. There are days that I am braver than others. The truth of it is, sometimes in life, you end up in scary situations. What really matters is not if we are scared, but how we deal with that fear. I wasn’t any less afraid than my first time on the Rim, but I was able to work through that fear. I experienced an amazing sunset, and an incredible view. I would have missed all of that if I had let my fear win. It took almost twenty years for me to push past my fear. In the end, I had spent that time worried about what turned out to be one obstacle. Frank A. Clark said “If you can find a path with no obstacles, it probably doesn’t lead anywhere.” Work your way past the obstacles and go somewhere. 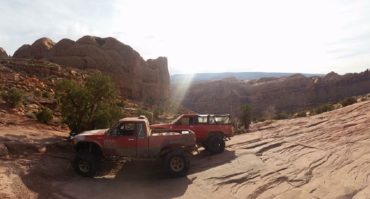 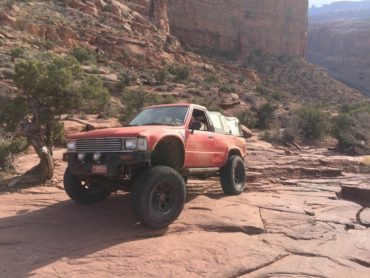