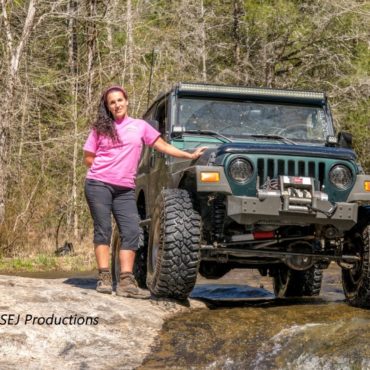 In my mid-twenties, I went to Colorado with a group for a ski trip and snowmobiling. I remember the guide asking, “Would you like to ride behind someone, or drive your own snowmobile?”  My immediate response was obvious, “I want to drive my own.” What kind of an adventure would it be if I was riding behind someone else? How fun could that be? I have always been a hands-on person. Decades later I asked myself, what happened to that adventurer in me? I guess life, responsibilities, and my more practical side shifted into gear more than my adventure-seeking self. 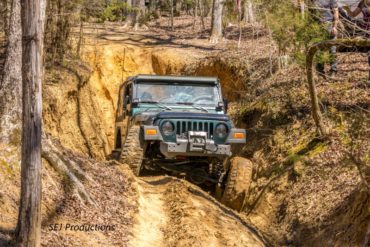 A little bit of background about me. I have been in the healthcare field for nearly 18 years. I enjoy my career educating people to live a healthier lifestyle. I love helping others, it comes naturally to me.  After many years of putting others first and being a bit frugal, I realized that I had been neglecting myself.  I found myself missing out on life’s adventures. I wasn’t traveling as much as I wanted, and I was not reinvesting in myself. I was more of a passenger. 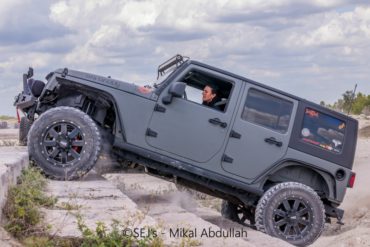 1st Gear:  Mikal, my boyfriend of 10 years, bought his JK after selling his Hummer.  Once he bought his first Jeep, he was lured into the whole Jeep scene. Before he got his Jeep, he was trying to persuade me to buy one. He thought it was a great match for me. Jeeps were fun and adventurous—like me! However, I also have a practical side. I own a reliable, affordable, and comfortable Toyota and I didn’t need another car. Why should I change now? 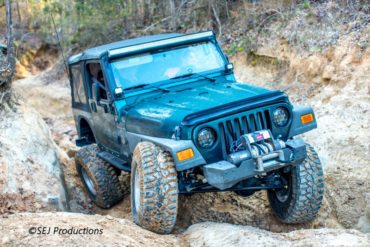 However, Mikal was coming from a different perspective. One year when we were at Jeep Beach, I started to look at Jeeps differently. I told him, if I got a Jeep, it would be a toy, maybe a two-door, stick shift, but inexpensive.  After he bought his own Jeep, he was so psyched he started his own group, South East Jeeps. His goal was to get to know Jeepers through traveling and networking. At that time, I was the supporting girlfriend and the “passenger.” I wasn’t a true “Jeeper,” yet, but I enjoyed the adventures and meeting such wonderful people. Some of them who I can now call friends. 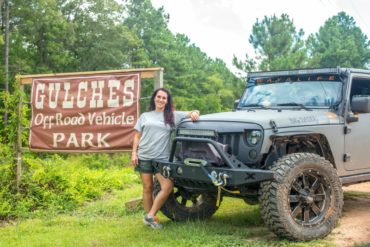 Last year, I received a random phone call from a longtime friend who invited me to Northern Georgia. Without hesitation, I booked a flight and took an extended weekend adventure. She drove me around the sites and we soaked up nature. It felt like a scene out of “Thelma and Louise.” We saw mountains, waterfalls, and went kayaking and biking. We had a blast! It was just what the doctor ordered! A spark of Andréa was returning. I found myself taking dozens of pictures 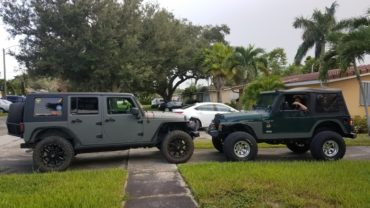 capturing our amazing experiences. Just as we pulled up to one of the State Parks, I saw this random Jeep that reminded me of my boyfriend. I had to take a picture of it. My intent was to text him the photo, captioned, “Thinking of You.” I was so distracted that I never ended up sending it to him. 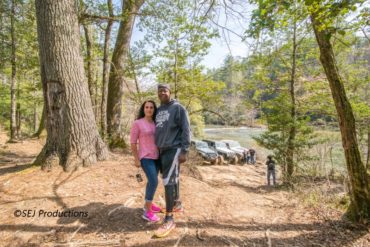 Two weeks later, South East Jeeps had a road trip planned. We convoyed to the Gulches in South Carolina and Helen, Georgia. This is the second time Mikal and I went to The Gulches, but this time we were bringing some newbies. The first day, Mikal led us around the trails to get everyone familiarized, because the park is geared to a more technical ride than what we are accustomed to in South Florida.  It was a beautiful day. But, as we were finishing with the last trail, our plans changed dramatically. Mikal broke his front driver side axle. This left him unable to do any off-roading for the rest of the trip. 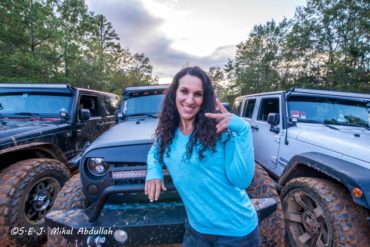 2nd Gear:  We wouldn’t let that put a damper on our trip. We adjusted and moved on. This gave Mikal an opportunity to enjoy one of his other passions, photography. Meanwhile, I got a chance to ride with others and hang out with them. Mikal rode with Bill, one of the Park Rangers. They led the weekend trailing. On one of the trails, Baby Gulches, Bill asked me if I could drive stick. I panicked and proclaimed I haven’t driven stick in over 20 years! With Bill's guidance I successfully conquered Baby Gulches. That was awesome, being the driver! Later in the trip, I drove one of the girl’s Jeep. Now I shifted from the passenger seat to the driver's seat! 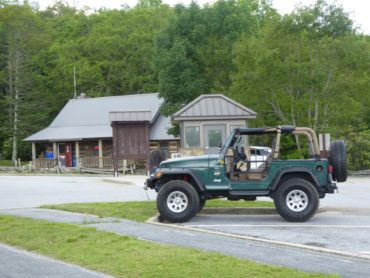 Helen, Georgia was our next destination. We toured around taking it all in by observing remote waterfalls and mountain top views, enjoying the company of good friends, eating, and even attending a wine tasting. On the last day, we decided to take an innertube ride down the local river. Only three of us went, Jeff, Shelah and I, while Mikal videotaped us coming down the river. It was breathtaking! Here we were relaxing in an innertube while riding down a beautiful river under a canopy of plush green trees, breathing in the fresh air, and passing by scattered homes with people waving as they drank their morning coffee outdoors. As we approached Mikal videotaping us, the water became rougher and we noticed the rocks became more difficult to navigate. I could see Mikal ahead, and all of a sudden I heard Jeff behind me yelling! He got caught in the current, which turned him backward as he hit one of the rocks and fell over. Luckily, he was not injured, but he lost his prescription glasses. 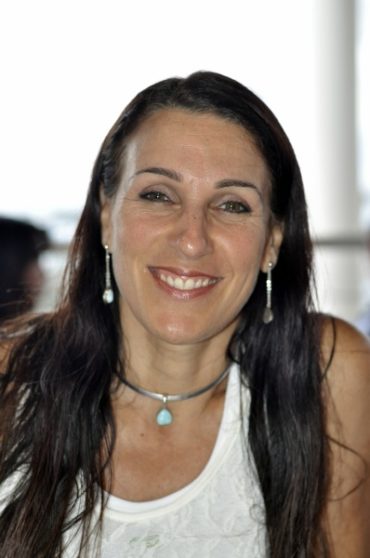 3rd Gear:  Again, we had another change of plans. One of our Jeepers could not drive his Jeep back home because he was not able to drive (or see) without his glasses. Jeff and I agreed that I would drive his pride and joy, “Just Keep Livin,” back to Florida. I loved his Jeep and enjoyed driving home, blaring satellite radio and listening to my tunes. We all got home safe and realized that sometimes some of the most enjoyable times are the ones we don't plan.
4th Gear:  A few weeks passed, and we were off to another road trip to Jacksonville attending Mikal's daughter, Britini's, college graduation.  We traveled to this monumental event with Mikal’s parents. We all had a wonderful time. While heading out for the evening on the first night, out of the blue, I received a text from a friend. He wanted to sell his Jeep. He texted me the Jeep’s build. As we were driving, I shared the details with Mikal. He was pleased and inquired about the price. We were negotiating and the next thing I know, my friend texted back, “I never thought I would sell the Jeep so fast. Who's buying it?” I replied without hesitation −me! He was so happy it would be going to a good home. Suddenly, I was petrified! In less than 30 minutes of texting, I realized I bought my own Jeep, sight unseen! What’s going on? I frantically replied back that we are out of town, could we see the Jeep when we got back.  For the rest of the weekend, I couldn't believe myself. Did I buy a Jeep? Was I finally getting what Mikal always wanted me to buy.
Upon arriving home, a check for the exact amount of the Jeep purchase was returned to me. What a coincidence!  Now, it was time to see my Jeep. Mikal and I went to check out the Jeep. It’s an older, two-door stick shift, modified TJ that I’m not so confident of purchasing. The ride was not the smoothest and I realized it needed some work. Mikal tried to convince me, of course it needs some work, but not that much. I remember telling Mikal, a couple of Jeep Beaches ago, that if I purchase a Jeep, it would be a toy, an older, two-door stick shift would be fun!
5th Gear:  I'm starting to feel the excitement of purchasing, fixing and driving my own Jeep. My Jeep is getting upgraded. The gears are being changed and lockers are being installed. She’s getting ready for our future adventures. While I’m shifting into the next gear by joining Charlene’s 2019 Challenge at Ladies Offroad Network.
Finally, the stars have aligned, and I am living the Jeep life. No longer am I a passenger, I have shifted into the driver’s seat.