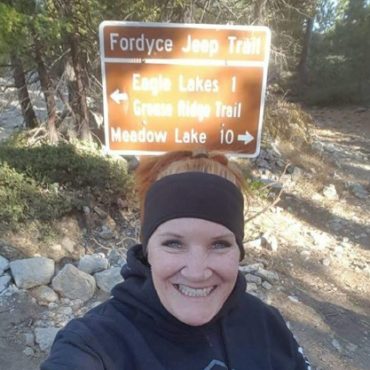 "Let's go to the Rubicon, she said!" It will be FUN, she said.  Of course I wanted to go on an adventure- I LOVE adventures!  Even though I only live two short hours away, I had never even heard of the Famous ‘Rubicon Trail’, The only off-roading I had done was on my horse!  She laughed uproariously when she saw what I carefully and thoughtfully packed for this adventure. But I insisted on bringing my cot anyway. So we strapped it down on top of her Jeep. Off we went looking like something straight out of “The Beverly Hillbillies”.  I can't even tell you the year of her Jeep. Older model. She named it “Hoopty”. It was loud and seemed downright beastly to me. She was part of Work Party for “Jeepers Jamboree” and we went on the actual Work Party weekend, before Jamboree. 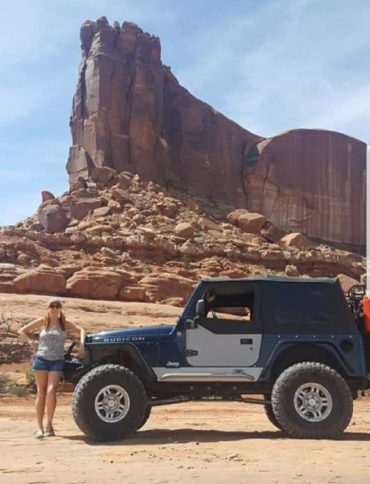 We drove in on the Lake Tahoe side with the rest of the Work Party crew. I watched as they all prepared their rigs and I was advised of a few basic rules. Buckle up was first. Keep your arms and legs inside the ride at all times! They told me it was very important to stay hydrated, and to generously apply sunscreen and bug spray, which is much needed in those parts! 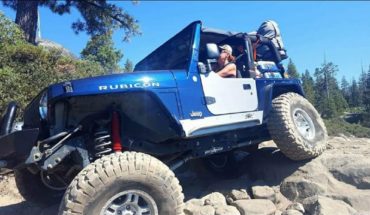 We were finally ready to hit the trail. I was so impressed by what these Jeeps could do! It was a sunny warm July day and the forest smelled of pines and rich musty earth—that musty earth smell was likely the result of the dust from the 20 Jeeps ahead of us! The scenery was spectacular with flora and fauna galore. I felt a peacefulness that I never felt being out there in the 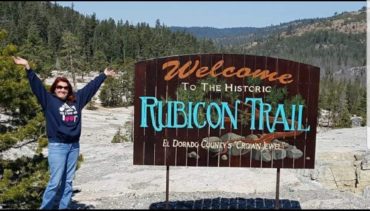 middle of what seemed like nowhere. Adding to the excitement was my nervousness. I was certain we would roll over at any moment. 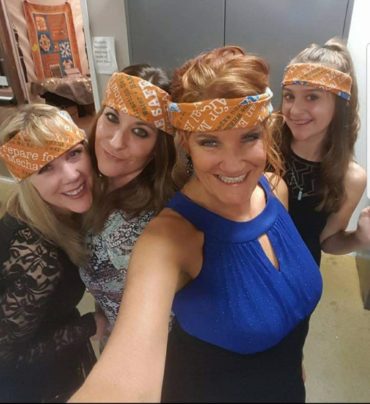 We arrived safely at Main Camp and set up our tents. There was quite a buzz of activity everywhere I looked--people preparing for HUNDREDS of Jeepers coming in the following weekend. A helicopter slinging in supplies, including a piano??! What?? Men setting up a big outdoor kitchen, and bar, chainsaws and axes cutting and splitting wood to cook with and so much more. I got to know most of the people there, some I already knew. Everyone was so nice and welcoming. Imagine my surprise when one of the directors gave me a complimentary ticket to the Jamboree the next weekend: I LOVE adventures! 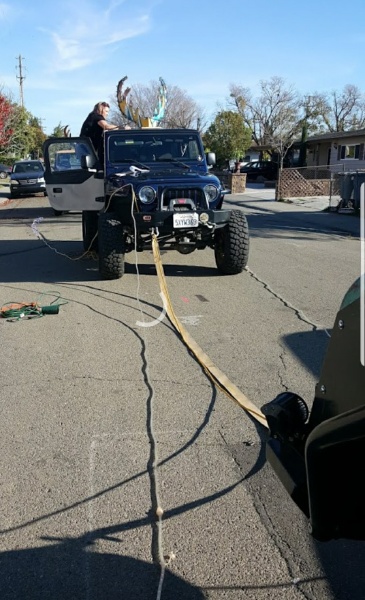 I was awestruck by the raw beauty of the Springs thick with trees lining the Rubicon river as it lazily flowed by. I felt like I was in a fairytale world and couldn't wait to go back the next weekend and see what this Jamboree thing was all about.  The next weekend couldn’t come fast enough. I rode in with my new friends, this time through the Loon Lake side. I was stunned by the granite slabs we drove 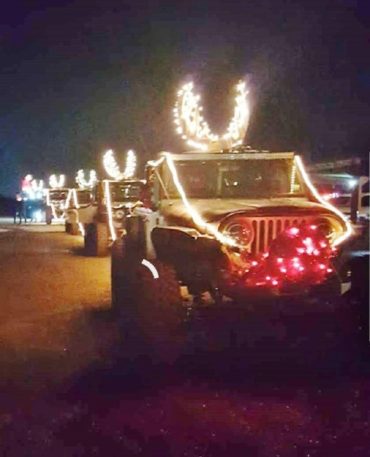 over. I was grinning ear to ear. Until. We. Broke. Down. I thought, “Oh crap, here we are in the middle of Desolation Wilderness and broken down, I guess we are not going to arrive at the Jamboree today after all.” Wrong! We were greeted by a rock roller who called a helicopter on his radio to come make a pick up. They flew the broken part to main camp garage where they have a very experienced crew of mechanics on staff. The broken part was replaced with a new one, and flown back to our location. To my utter amazement, we were back on the trail within an hour…talk about service!

We arrived at the Springs that afternoon and set up camp, walked down to the river to cool off and have a beer. By the time we made our way back to our camp, the Springs had turned into a veritable tent city! I struggled to find my tent among all the dozens of new ones that popped up! The weekend was off the hook! So much fun! Well, as they say, "What happens in the Rubicon, stays in the Rubicon", so that’s all the stories I will tell about that weekend.

That weekend, I was lucky enough to meet Mark Smith, the founder of “Jeeper's Jamboree”. He shared pictures and told us stories of how Jamboree came to be and the rich history there in the Rubicon. He impressed upon us the importance of taking care of this gem to preserve for future generations to enjoy.

On the last day of my trip, I was watching my friends heading out towards Big Sluice. One of the rigs broke, which caused the line of rigs behind him to come to a stop. The guys behind him got out to question what the problem was. They all put their heads together and devised a plan. They got into action, started getting out parts and tools and worked together to help a guy they didn't even know! Problem solved in no time, and back on the trail. I was pretty impressed. That day I learned about "No One Left Behind." I was experiencing and witnessing a community that gave whatever they had to help each other get thru the journey. I knew I wanted to be a part of this community somehow. I made many friends in those early years who continued to take me back on the trail year after year where I enjoyed life changing adventures.  The most memorable was spending 17 glorious days in the Springs one summer with one of my besties. We had an amazing time, mostly left alone during the week to relax, then the Jamboree would come back for the party weekend.

Early on in my adventures, I was introduced to The Pirates of The Rubicon club, (where I volunteered on my first Rubicon trail clean up, called the Poo Run), Del and Staci Albright, John and Barbara Arenz, Merlin Scott, Shannon Chard and many more important stewards of the Rubicon. They taught me about protecting and preserving this beautiful trail. I began volunteering time with Rubicon Trail Foundation, and Friends of the Rubicon on work parties to improve and keep the trail open. 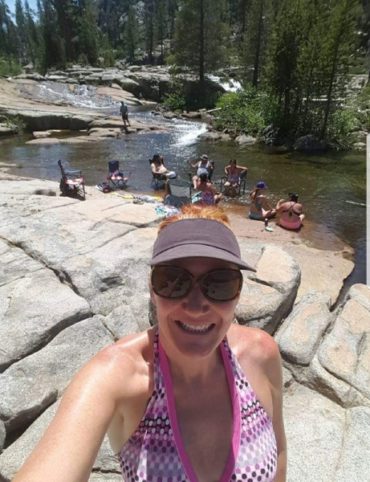 While all of that was great, it wasn't enough for me! I dreamed of having my own Jeep someday. A friend convinced me I was ready and even though I'm not mechanical, he was sure that I could be a good rock crawler too!  Flash forward to present day, a Jeep owner of a beautiful 2004 Rubicon Tj who I affectionately named “Jewel of the Rubicon” or “Jewel” for short! Officially a rock crawler for the last 5 +years! It has been everything and more than I imagined! I bought her stock, and immediately put a 3-1/2" Rubicon lift suspension kit on it. As Jeeps go, "Just Empty Every Pocket", my dream was coming true! 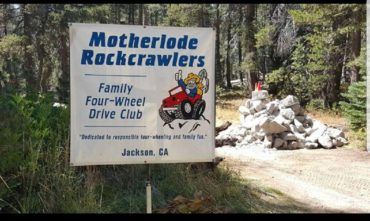 I enjoy most weekends on the Rubicon in the summer months relaxing and camping with friends and family and meeting people from all over the world. I love the challenge it presents every trip. Whether it is simply getting my rig packed, or driving the entire trail. Although I haven't ventured to many other trails besides the Rubicon, I've participated in Cal Four Wheel events, including Sierra Trek where I completed the entire Fordyce trail, (that was hard on 35's) and Winter Fun Fest. I have had the opportunity to wheel all of Deer Valley Trail, Blue Lakes to Red Lake. The 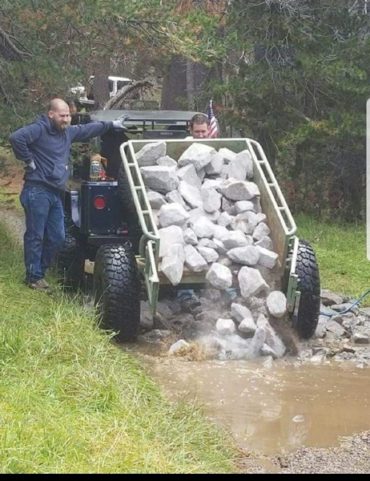 Pièce de résistance was in Spring of 2018 when I had the good fortune to tow my Jeep to Moab with Joe, my “Jeep Ninja”. We met up with other friends and toured this amazing place. The time was too short, and Moab is on the list to go back someday soon!

I still support and participate on work parties with Rubicon Trail Foundation, Friends of the Rubicon, and support Wheeler's for The Wounded, Northern California, and hope to be chosen as a driver to take a Vet in some year for this incredible outreach started by Kevin Cary. I'm also a member of Blue Ribbon Coalition, a group dedicated to protecting trails. I volunteered with the Forest Service and Motherload Rockcrawlers club, rehabilitating and reopening the Deer Valley Trail working to restore the natural landscape, hauling numerous trailer loads of rock, replanting a large meadow and protecting a special cute toad! 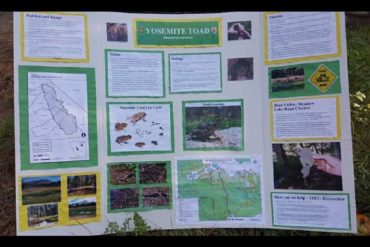 I'm a member of a small local women's wheeling group that was started by Diane, with 12 women, 3 years ago on an all-girls wheeling camp out. That trip was so successful, we decided to name the group, Women That Fourwheel, (W.T.F), and get together for other wheeling activities. We participated in the Prairie City Light Parade in December 2017. Decorating, connecting and lighting up 6 rigs like Santa and his reindeer! We had a couple work parties to craft antlers, a red nose for Rudolf, and a giant Santa hat. By practicing, we were able to connect all 6 rigs and drive around the Vorra track! We started a new group category, and we all received an annual pass to the park. 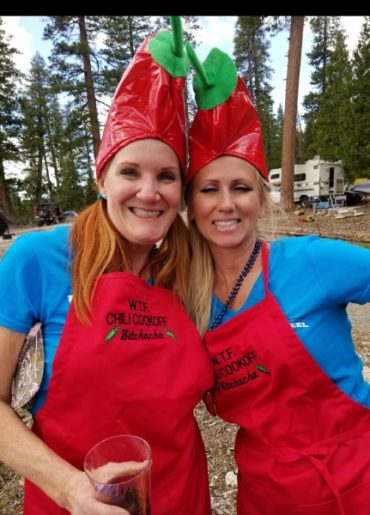 In the spring of 2018, W.T.F, organized by our amazing member Katie, we put on a chili cook off in the middle of the El Dorado Forest, attended by 9 ladies’ teams. I was in charge of having T-shirts made for all of us and helping with registration. Following a map, and wheeling the trail, we drew numbers out of buckets placed along the trail. Back in camp, we used our numbers to select our ingredients. Then it was time to cook and be judged! My team mate and I didn't win that day, but it was so fun bonding with these strong and supportive women. We plan to have future cook offs! We had friends and family attend and judge. A good time was had by all for sure!

In 2017, I attended the Black Tie and Boots fund raiser for Rubicon Trail Foundation. So much fun to see your friends you usually only see in trail gear, get dressed up and wearing some interesting boots!
During the live auction, I bid, and won the bid for a weekend Unimog trip! Last summer, my friends and I took that trip on the Rubicon trail in two Unimogs and camped for the weekend at Spider Lake's private property. It was an amazing adventure traveling in these giant wheeling machines! They can sure carry a lot of chick stuff!

In my personal life, I'm a mother to two adult children I couldn't be more proud of. They are both educated and employed and off the payroll! I’m blessed with a wonderful loving family and great friends. I have been a self-employed hairstylist for 30 plus years. This has been a fruitful career and has afforded me time and a little extra money to enjoy this wonderful Jeep life. I'm excited to be part of LON and this challenge. I look forward to all the adventures it will bring to better me as a person, Jeeper, and an adventure-loving lady that off-roads! 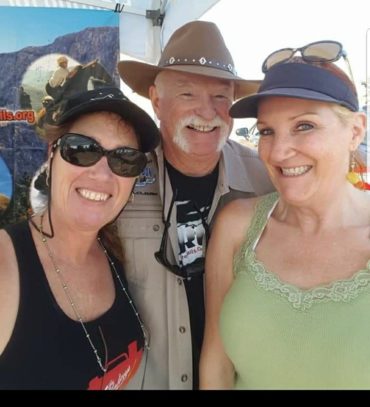 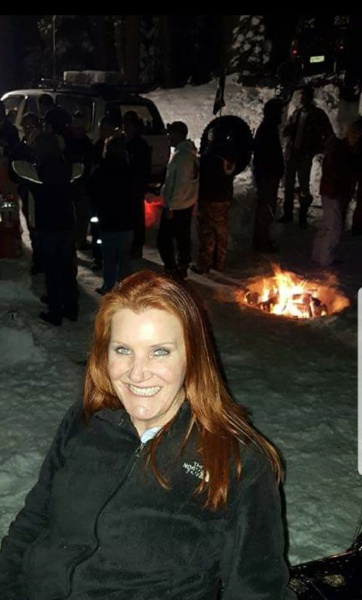