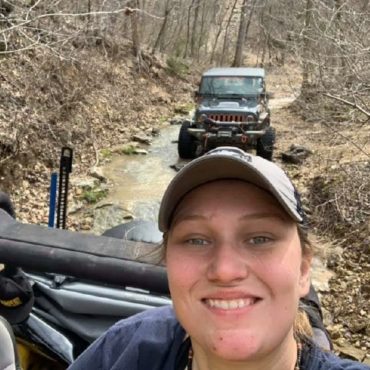 When your parent showed up at the house with a new vehicle, it was always Christmas. The neighbors would come by and ask questions while admiring something new in the driveway. I can count three times that this happened, but this time was different for me. There, sitting in our ridiculously steep driveway was a white Suzuki Samurai in all of it’s late ‘80s glory. 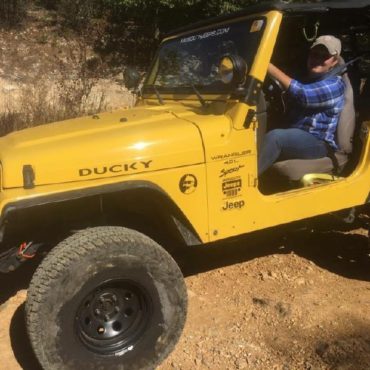 It was a 1989 model in particular and I was immediately fascinated by the 5-speed transmission and snap button soft-top. My dad and I took it all over the south, rolling down I-55 with the top down. I would fasten my teddy bear Benji in the seatbelt with me while I held onto the passenger grab handle in both fear and excitement. I would look at the sky as we rode, listening to the straining speakers crank out the best cassette tapes in my dad’s possession. I can still hear the eerie sound of a dying cassette no longer resembled what should have been Hotel California. We didn’t 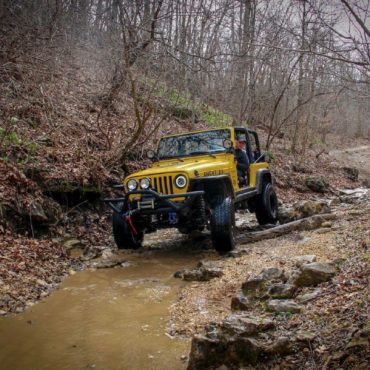 have the Sammi long enough to ever upgrade that radio because the engine gave out. I remember he would drop me off at school in the morning in the bitter cold, forcing us to wear our jackets because it was such a hassle to get that top back on: something I would later do in my Jeep. 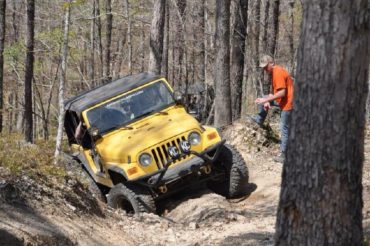 I didn’t know it in those early years, but that simple Samurai would forever shape my view of what would become my Jeep obsession. I didn’t even realize I was hooked until I got the opportunity to buy my own.
It took nearly 15 or so years before I found myself riding in the back of a stock ‘98 Wrangler one day. I remembered that simple, utilitarian Samurai and all the “cool things” I wanted to do with my dad before that engine blew. The only problem was I knew no one would dare finance a Samurai due to its age. So I began my search for a Jeep. 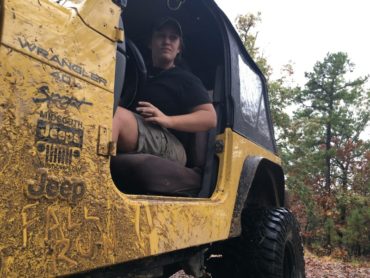 I didn’t want yellow, but it was the only color in my budget. The pictures didn’t do it justice as I searched through AutoTrader online. It was the 5-speed I dreamed about and the soft-top that I wanted. It had a great stance to it: stout and low to the ground, just like me. We went to a somewhat questionable car dealership to see it and I decided he was indeed the one: a 2000 Jeep Wrangler with a 4.0, AC, and a stick. 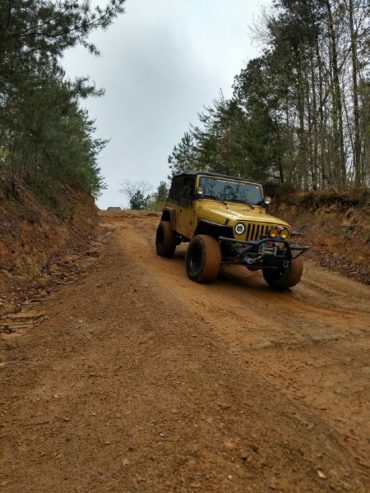 Funny thing about that 5-speed: I still didn’t know how to drive one. My dad, who was sick at the time, test drove it for me. He also drove it home after I signed my life away on the paperwork. We dropped our failing truck off at the house, and took the Jeep downtown to the massive, parking lot of the derelict landmark the Pyramid of Memphis, long before it became the world’s largest Bass Pro. After about an hour of instruction on how to use the left pedal, and another half an hour of trying to figure out how to put the soft-top down, we hit the interstate. I was finally driving and I had only stalled a few times. 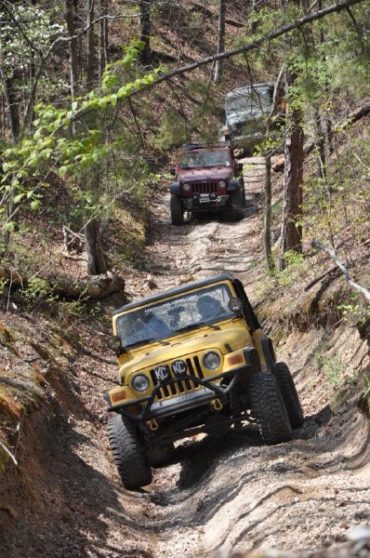 That was about 8 years ago.
There’s a joke about “not wheeling your vehicle until you’ve paid it off”. I have yet to meet someone who actually abides by that sound line of reasoning. 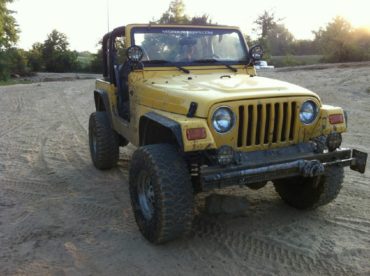 It took me a year to name Ducky, but it fit. It was probably another 2 years before I was properly able to take him off-road somewhere that didn’t include mud. Working nights at the time, while going to school full-time, and playing rugby ⅔ out of the year meant I had to plan my trips carefully.

I learned what “off-camber” and “4 lo and go!” meant at Hot Spring ORV (at the time known as Superlift). I put myself in a beginners group. They waited on my boyfriend David and I to get off work at 4:30 am and drive straight to Hot Springs: 3.5 hours away. To my amazement, we got off the highway, disconnected the sway bars, aired down and simply hit the trails. Just like that. My good friend Pigpen lead our group. This was the first time I needed a spotter: this same obstacle becoming a no brainer later during future runs to the park. Adrenaline kicked in that day, lack of sleep no match for the excitement of testing my baby: my Ducky. It was this trip that I started to really get a taste for the off-road community. Sure, we all hung out and threw lift parties, but it was something different to camp and ride with these same kind souls. I joined Midsouth Jeeps in June of 2011 and have been a member ever since, making some of the best of friends. 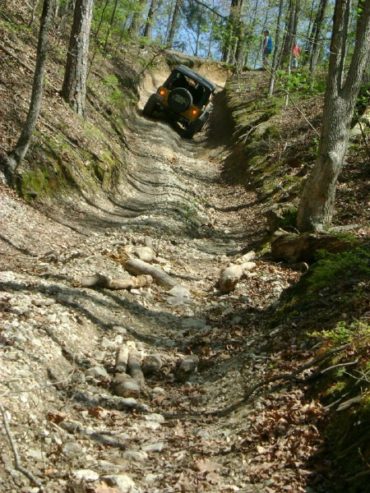 I have been to Hot Springs ORV probably 4 times, SMORR, and Stony Lonesome, however, I have only truly been terrified once. We rode with a few of those same friends a few years later back at Hot Springs. Everyone in their off-road experiences has that one trip where we want to “push it a little bit”. Well, we ended up on a level 4 (out of 5) trail backwards. Little ‘ole me in my open diffs and 33s. Did I mention it was actually closed for maintenance? But sometimes the only way out is getting through. I can still see the guy in front of me on 37s struggling to get up a particularly difficult patch and me thinking “Nope. Nope, nope, nope, nope, nope.”
Well, of course I got about as far as him and got stuck. And of course, the Jeep gods determine at this time to declare my winch dead. Biggest facepalm ever right there standing at about a 25 degree angle up hill. Needless to say, at that point I was done for the day. We hit the next service road exit and rolled back to camp for a nap, because dangit, sometimes a nap is all you need. Trips like this never cease to amaze me in that we can do some really stupid stuff and then drive home like it was nothing. All hail the Jeep. The few trips since have been much milder, focusing on technique rather than insanity.
These experiences have helped to shape my relationships through life. I have my Jeep family, my rugby family, and my family consisting of my dog(s) and my boyfriend David. Although he has been on every Jeep trip I’ve made, he has not had the opportunity to drive Ducky because of that third pedal. This is something we are doing this summer. I am determined to help him learn to drive Ducky, something I should have done a long time ago. It’s time. His support through this has gone above and beyond, even if it was just getting that wrench a half a turn more. It has also sparked his own interest which is beyond thrilling to do together.
Ducky has changed over the years and adapted, just as I have. I no longer work that crazy night shift and Ducky is no longer my daily driver. We’ve both changed together. The paint is slowly chipping as he ages and the few rust spots linger. I’ve changed his namesake stickers more times than I care to count and cursed him even more. But this is what it’s all about. We have grown together. I still sit in awe as I go down the road with the top down, sometimes in fear (hello death wobble!) but mostly with excitement and the sense of freedom. I still crank my speakers playing Hotel California but without it sounding like a dying, demonic cassette track. In fact, I’ve replaced this radio three times along with upgrading my speakers.. I still drive to work in the morning with the top and doors off, wearing gloves and a beanie to keep me warm because it truly is a hassle to get the top back on (especially when you’re short). And, when he asks, I still let my Dad drive. After all, I wouldn’t have my Jeep without him. 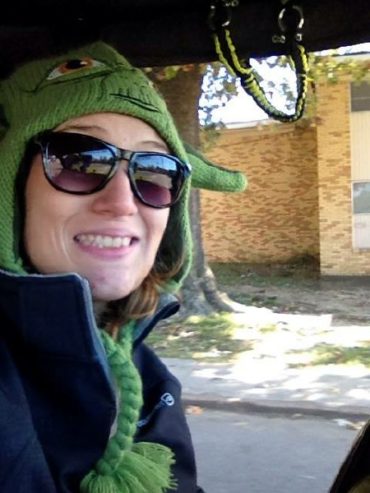