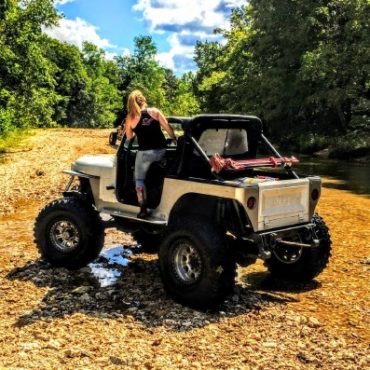 Have you ever met a walking talking contradiction? Met someone so extremely shy that they suffer from panic attacks, shut down for weeks at a time but also be widely known as one of the most outgoing and vivacious women anyone has ever met? Like most, I don’t like what I see in the mirror but instinctively know I could attract anyone I ever wanted. You could tell me any dark secret and I would never judge you in anyway, always finding a way to understand exactly what could cause you to have this secret; just to berate myself for hours over a misspoken comment in a conversation last week. I expect to be treated and respected as a male equal for things I accomplish but absolutely love the rewards that come from “innocently” using feminine tactics at times. So basically I hate the 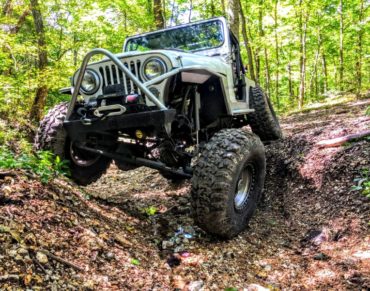 comment “Well if I had boobs….” But have been guilty at times for using them to my advantage. Mentally excusing myself; that, I am a woman so what did you expect?

Like a lot of stories you hear, I grew up in an abusive childhood, starving and very poor. My deep desire to be loved and included often clouds my common sense in many matters. Watching my mom stay in an extremely abusive marriage has caused me to fight any idea of control. I met my husband at 15 and through many hardships we are still together and have two amazing girls. I 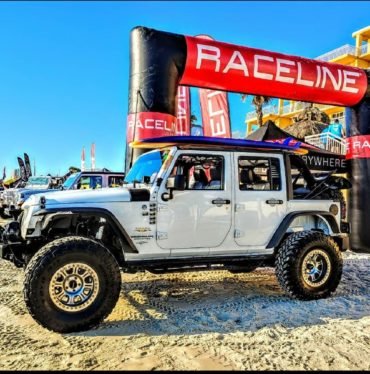 completely devoted myself to my family and lost any identity I may have had other than wife & mom. I remember being around eight years old and someone pointed at a Corvette and said they wanted one. I instantly said I’d rather have a Jeep. This seemed to be the only piece of myself that has always held true.

Well the year my youngest graduated I finally got one of my own. I started seeing the world a little differently every day. Don’t get me wrong we had played off-road many times in many different ways long before this. 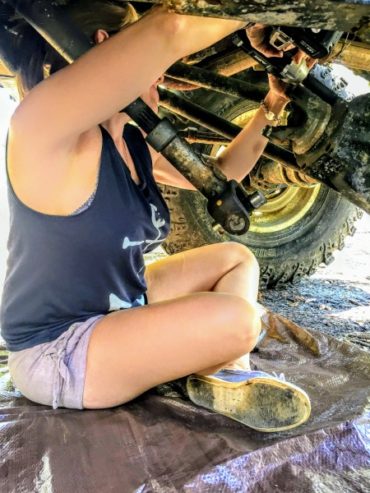 I grew up in the Smokey Mountains and loved adventure to the point of taking my ’85 Cavalier way into the mountains, climbing hills, and crossing creeks. Continuing this trend with any and all vehicles we ever bought after that. We played with mud trucks at mud bogs for time and I loved anytime I surprised the men around me by doing just as well as them. We ended up moving to Florida and as the girls were getting older we decided as a family we would get an airboat; in hopes our girls would always want to spend more time with Mom & Dad than somewhere else. This actually worked quite well. An airboat is a boat with the big fan on the back that can run dry 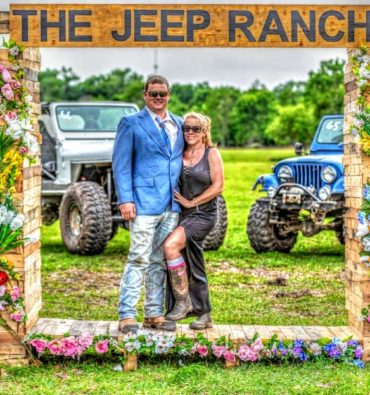 ground, all forms of water and even climb hills. Where we live we have around sixteen thousand acres of fresh water swamp, trail systems and beautiful islands that we can pull up on and cook out. Airboaters are exactly like Jeepers, maybe even a little more tightly knit. They have the pretty boats that don’t want any scratches that we call “River Riders”, much like the “Mall Crawlers”. They have Show and Shines, along with gatherings where they get together to eat and brag. There are “Trail Beaters” who love to find and make trails that most will never use similar to “Rock 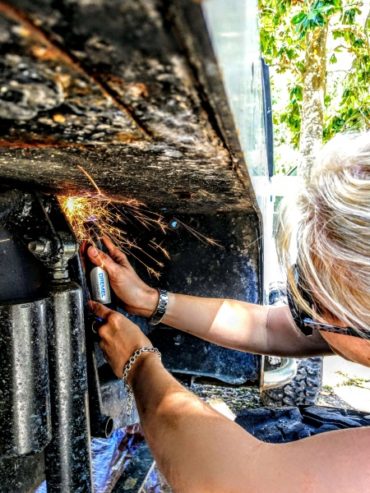 Crawlers”. We fall more under this category. We have clubs and wrenching weekends, there are even cliques to avoid. Most of the people out there become part of your extended family. Yes, I drive the boat very well but as most things with women in the South, the husband is known as the lead person.

So these two kids with no family support finally have gotten to the point in life where we had good jobs and started buying more toys. We bought a Can-am Commander 1000 side by side and for a bit I happily rode passenger while we explored. It didn’t take very long and I told my husband I was tired of always being a passenger on the airboat and now on the side by side. We have been best friends since day one and he helped me buy a Can-am Renegade 1000 which was unheard of a girl owning. I told him I wanted something I could grow into without fear of growing out of. So even though I lived in a little family revolving bubble, I was gaining a rep as a woman who could handle a truck, airboat and 4wheeler just as well as most guys. The Can-ams started sitting more than they were being used and bills got tighter so we ended up selling them, choosing to stick to the airboat and the girl’s sports. So here we are back to the point of the story where I finally got a Jeep of my own. It is a 2015 Sahara Unlimited and I have to pay big payments on it. We did a little exploring and found a place called The Jeep Ranch just outside of Wildwood, Florida. The hubby has now joined in the Jeep madness and bought a 1977 CJ5 that he could wheel around because we found out quickly that riding in the same Jeep wasn’t going to work. He liked to give me pointers I didn’t need, and I liked to tell him loudly to get out!!

We started volunteering at the Ranch and become part of the Staff. It’s a working cattle ranch on an old mining site. So it has complex trails and hill climbs that I started forcing my Jeep through even though it wasn’t properly set up for it yet. People freaked that I would damage such an expensive new Jeep but I found a love for pushing myself to do things other women around me were too scared to do. I didn’t mention before but I grew up with all boys, and always insisted on trying and competing at anything they were doing. This showed in everything I have ever done in my life, including raising two girls just like you would if they had been boys. I insisted on them being tough and never backing down, and enjoyed the moments where I could dress them pretty when needed. So at this point my expensive daily driver is showing signs of abuse and a conversation of build it up or buy a toy has come up. The reality is we could buy an already built rig cheaper than it would cost for the parts needed on my JKU.

So enters my 1979 CJ7 lifted, up on 40” tires and propane injected with just about every aftermarket item you could think of. I love lining up with the big boys that are ready to go hit the most difficult terrain they can find anywhere. This so far has included Florida, Georgia, Tennessee, Missouri and the Carolinas. Seems every time I line up with a group of heavily built rigs at first I see admiring looks for my CJ but when they realize it’s a girl in the driver’s seat you can see the 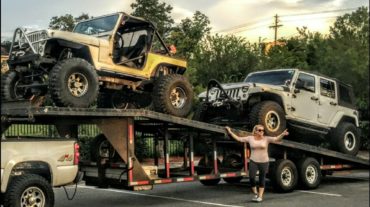 look of disappointment and aggravation cross their faces. It used to really bother me that they were judging me solely on the fact that I’m a girl. Now, I just grin and wait because by the end of the day, I have showed that not only are my metaphorical balls bigger than some of their “balls” but I have usually helped them instead of the other way around. Why does the looks and disappointment not bother me anymore? Well I spent most of my life pushing girls around me to not be weak or too 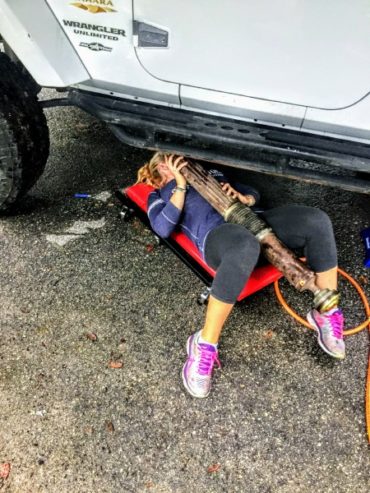 intimidated to try outside their comfort zone. I spend so much of my free time working with women of all ages on how to improve especially off-road. So when I line up with the big boys so to speak I am there to push way beyond any obstacles and obtain more knowledge on the trail. Occasionally a girl in a bought rig will pull up and I to have the exact knee jerk reaction of…. disappointment and aggravation. This has come from not only wheeling with women who happily jump out of their rigs and let a man do the obstacle, or leave us no choice but to drag her through the entire trail, causing it to be longer than it would have taken us normally. She then gets to the end and brags to everyone that she is a big time wheeler, not caring at all that she has now ruined a ride we all looked forward to and put a lot of money towards getting us and our rigs there. “Everyone has to start somewhere”, and “that’s how you learn”, don’t forget “at least she was brave enough to try.” Trust me I remind myself constantly of these things, but “She” is the exact reason women don’t get some of the respect we deserve. 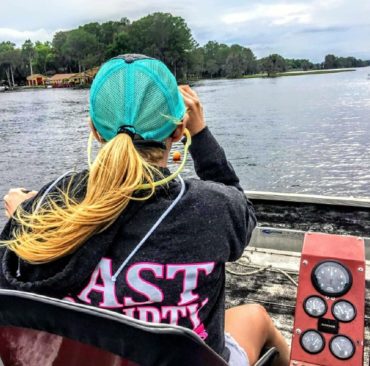 So my thought on this is, the rig might have the capability but it’s the driver’s responsibility man or woman to learn just how all those parts work along with how to properly use it on the trail. With my experiences I fully believe it is the driver that actually needs upgrading more than the rig. So did you catch the contradictions? I push women to do better, taking pride when one succeeds but I am quick to judge women just as harshly as everyone else does. I'm opinionated, stubborn, and have a huge heart that I actively hide. I do many good deeds in secret and always have time to help an animal. The only real thing that I hope is truly known about me is that I am extremely grateful for all the blessings in my life. I have found support and love in this crazy off-roading world. Companies have chosen to support me and my goals of inspiring women to reach further. My Jeeps have grown and I work hard to try and deserve it every day! With this life you receive only so much energy, don't waste it doubting yourself or looking back on what you can't change. Positivity attracts positive living, and the Universe is full of abundance, so never give yourself any limitations. 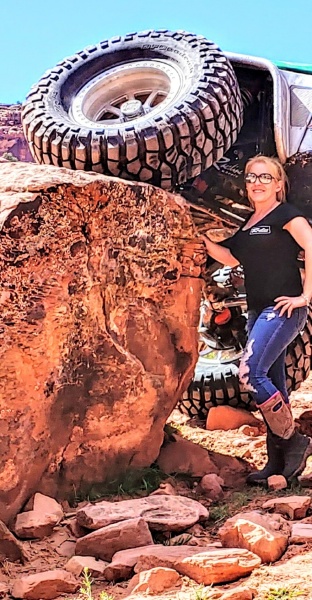