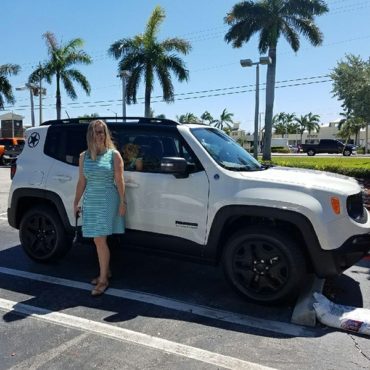 My story doesn’t break hearts, nor does it include epic trips in my Jeep. It’s just my life and my travels; how I fell in love with off-roading all over again. With my Jeep I have met so many people from different walks of life and off-roading abilities. I got involved with community outreach in a way I never would have without the help and encouragement of those fellow Jeepers, first with the Bearhawk and now with Magellan. Magellan is a tribute Jeep for suicide, depression, and PTSD awareness; all of which I am a survivor and a sufferer. Both of my Jeeps have and do promote the awareness of veteran’s suicide and veterans’ affairs, Back the First Responders, the Blue Line Bears and Down Syndrome Awareness. 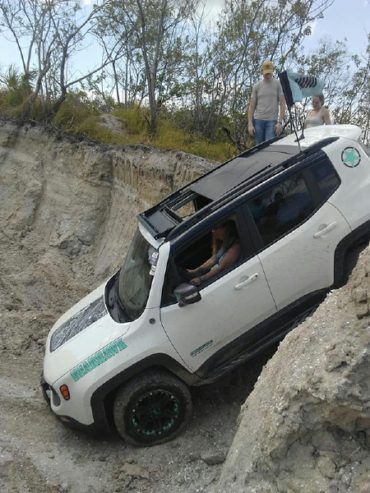 Let’s start off with this, I am a native Floridian that grew up in the Big Cypress Swamp. That’s right, with the alligators, snakes, bears, panthers, and every kind of bug you can think of. I am an only child, so my dad and my grandfather (Poppy) had to figure out what to do with a girl. Yep, a girl. Boys were easy to get motivated into dirt, mud, off-roading, shooting, fishing, and just, well “man things.” But a girl? Is she going to be a prissy little thing that squeals in horror because she got dirt on her dress? Is she going to stay inside because it raining or because it’s too hot? Being in the Big Cypress meant that you were on your own. There was no phone or electric, except for the diesel generator that was only run on special occasions. The TV and CB were connected to a car battery. Every Saturday afternoon the battery would be charged up for the following week. The 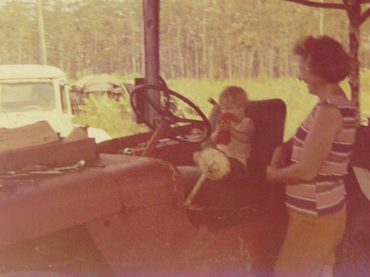 closest house was about a half mile away, so it was very remote and isolated from outside influences.

My dad and Poppy didn’t have to worry too much about me being a girly girl. In fact, I would run about with my shoes off and my white socks on. I would go through so many socks my mom would yell at me to either put my shoes back on or take off my socks. My mom hated 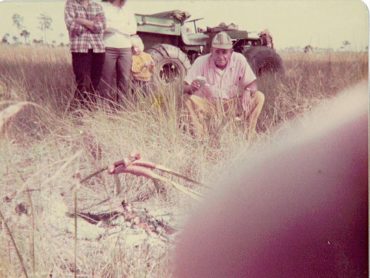 doing my laundry. Turned out, I loved playing in mud and getting dirty. I loved catching frogs, fish and dragonflies. But there was one thing that I love doing and I would never turn down when it was offered, getting to ride in the swamp buggy. Being in that buggy gave me an opportunity to hang out with my dad and my Poppy without having to be a lady. The buggy was an old CJ-3 Jeep that Poppy turned into a swamp buggy. It was rusty and loud, but it got us through some tough deep mud and let us explore the Big Cypress without worrying about getting stuck. That buggy taught me how to love the outdoors and love the land that we lived on. It gave me the appreciation of how autos worked from the inside out. I learned how to change the oil and the tires. I also learned how to drive that old Jeep. 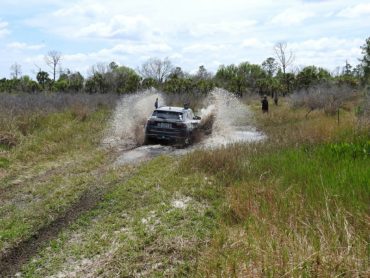 When we had to move out of the swamp because of my Poppy’s failing health, I was so heartbroken. We moved to a place called Loxahatchee. Now we had neighbors and electricity, but we were close to the hospital so when Poppy got sick it wasn’t a full day to get him to Miami. Moving there meant there was still plenty of opportunity to off-road. One of the neighbors had a Honda ATV; yes, the three-wheel kind. It was pretty easy to drive, and it would take us to places that we couldn’t get to in a big 4x4. We would ride out behind Lion Country Safari and watch the monkeys, lions, and elephants. There was always an opportunity to take the ATVs, the horses, or the go-carts around without getting into too much trouble. Of course, there was always water or mud to play in because as everyone knows Florida might be the Sunshine state, but it rains more than shines. 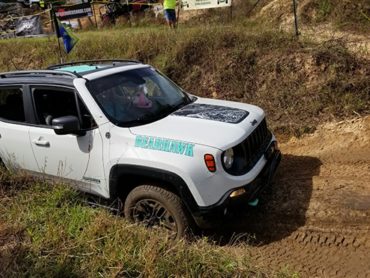 As I got older and into other activities, off-roading fell into that category of “when we have time.” I moved away from my home state in 1996 to Alaska to work for Alaska State Parks as a Junior Ranger program coordinator and instructor. I was there for three years. I’ve seen the Northern Lights and bears up close. I’ve been combat fishing on the banks of Alaskan rivers, camped 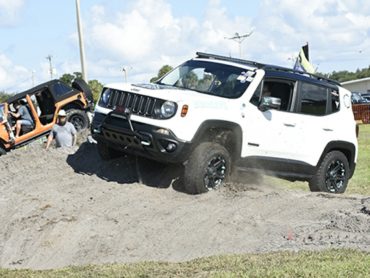 and walked on glaciers. I’ve been swimming in the hot springs at 40 below. I’ve seen temps as cold as 56 below zero and lived in a 16x24 cabin with no running water and an outhouse in back. I was trapped once by a momma moose and her baby while using the outhouse. I have seen the Alaska range Deborah, Hess, Hayes, and Denali with the Alpenglow shining upon it during the winter. I even camped in Denali National Park and took the ranger bus to end and back. In 1999 I moved to Bloomington, Indiana. While there, I got experience some amazing bird watching and nighttime owl hunting. I got to see Saw-whet owls and Prothonotary warblers in their native habitat.

I left Bloomington in 2001 and moved to Houghton, MI. That’s the UP of Michigan. I learned how to fly-fish and how to shovel snow, lots of snow, 350 inches of snow. I also learned how to cross-country ski and rode my first snowmobile. I helped with the dogsled races and took the Sunday school kids out in search of native wildflowers and owling late at night when the moon was full. But during all that time away, the swamp called to me like a mother would call to a child. When I would come home on visits, my mom, dad and I would take a weekend and spend it together in Chokoloskee and Everglade City fishing, camping, off-roading, anything that would bring us closer to the swamp. 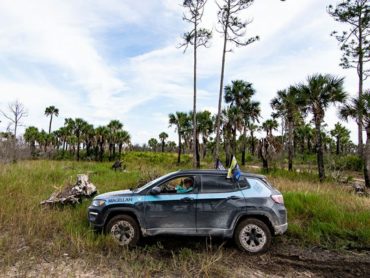 In 2015, I got tired of being cold, away from my parents, and away from my beloved Big Cypress. I packed up my things and moved home. My home, my real home. I started dating an old high school friend of mine, who was big into the South Florida Jeeping community and I got involved with off-roading again. It took me two years, May 1, 2017 to be exact, before I bought “my” first Jeep. She was a 2017 Jeep 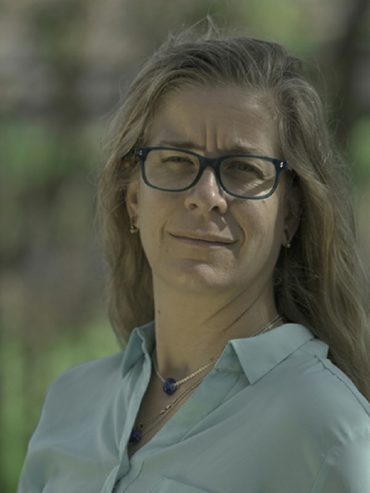 Renegade Trailhawk I called Bearhawk. With that little Jeep I have been to some amazing events; Jeep Beach, Jeeptoberfest, Jeepin’ with Judd, Krawl’n for the Fallen, and Suncoast Jeep Fest. I also got to take her to the Jeep Ranch, Ocala National Forest, Citrus Wildlife Management Area, Richloam Wildlife Management Area and the Compound.

I traded the Bearhawk in for a 2018 Compass Trailhawk I named Magellan. Who knew I needed heated seats? Her first event was this year called Jeepin with Judd. She did amazing! I did the trails 1-5 and even made it through 80% of the moderate course. Someone in a JK was complaining to one of the spotters to “get that girl and the little Jeep off the course.” The guide turned around and told that guy “she has made it that far and only had to be pulled off twice. You didn’t even start the course and you got stuck. Let her finish.” That man rolled up his window and didn’t say another word. That’s when I knew I had it all together; making it through 80% of a moderate course and the “big boys” couldn’t even do it. I felt so proud of myself that I was able to accomplish something I’d been dying to try in my non-lifted Jeep.

Not to long after Jeepin with Judd, we set up to meet some friends to go the Big Cypress Preserve, Bear Island Unit. I had driven past it so many times while on Alligator Alley(I-75,) and HWY 41 when my parents and I would go fishing, but I had not been on those trails since I was a little girl. I didn’t realize how much I missed my home in the swamp until I was finally driving down that old dirt road in my own Jeep past my grandparent’s old place. I had tears in my eyes the whole time. When I saw that old bridge still standing, I slammed on my breaks and started crying. All the wonderful memories of living there came flooding back. That was where I felt my strongest and my weakest.

I emotionally broke down at seeing my old home, but I felt the strength of everything I was taught flow through my body. That was where I learned to be honest and truthful, to follow the rules, and to stand up for myself and others. The whole time I was there, the smile never left my face. Even when I got stuck twice, once because I was being silly, the next when I took the wrong line. I was able to introduce a 12-year-old girl to native flowers and birds of the area and gained the trust of her father and herself, that she asked to ride with me. It was a wonderful fulfilling day of friendship, family, and memories. Just like the memories that I had when I was with my parents and grandparents, I was able to pass along those memories on to a young girl.

Some people say that their “ride” saved their life. Some say that off-roading is a way of life. But for me, it’s more than just driving my Jeep. It’s being part of a family, a way to give back to the community by cleaning up a trail, donating time or money for a great cause, or bring a smile to a young person’s face when they have been hit with the unimaginable. It’s a way to explore new surroundings and experience something you never thought you could or would. It gets you out of your comfort zone and into a place where you need to trust the people that you are with. It’s more than just hooking up a winch to pull someone out of a hole or off a rock. Off-roading makes you think about the situation and come up with a working solution that keeps everyone and the environment safe; its problem solving, engineering, mathematics, geometry, and treading lightly. My Jeep has enriched my life and reignited my passion for the outdoors and helping people.