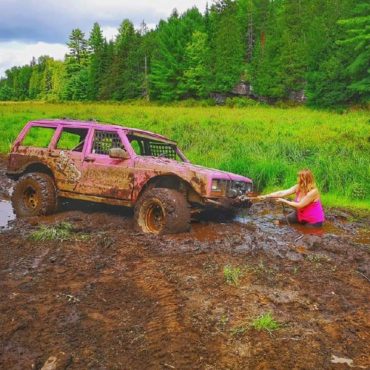 My name's Amanda Brackett. I'm 23 years old and from a small town called Norwood located in Ontario, Canada! I own a '99 Jeep Cherokee that everyone knows me for as That Pink XJ. I'm a small business owner and stay at home mom with two daughters that love Jeeps and offroading as much as I do! 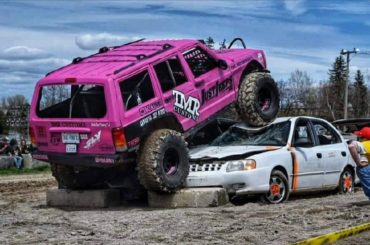 My lifestyle changed almost 5 years ago when I met my boyfriend. Thanks to him I'm now apart of a huge offroad community and family that I didn't even know existed.  It was so random how I met him and I couldn't be more grateful! One day I happened to see this awesome Jeep Cherokee driving doorless down the road, and thought how cool is that! Then noticed the driver and thought well isn't he cute as he passed. I went on with my day and was headed home when I happened to see that same Jeep parked at a restaurant so I figured what the heck, I'll leave my number in his 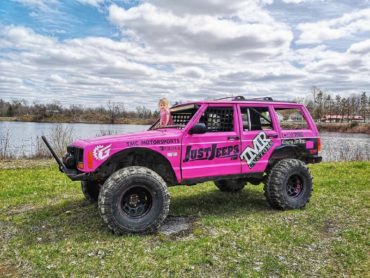 Jeep, what's the worst that can happen. Well, here we are now with two beautiful daughters and two badass Jeeps. 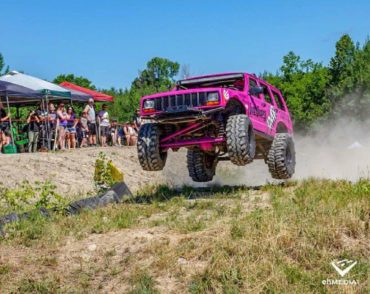 I had purchased a 99 Jeep XJ around a year after being introduced to the Jeep scene. It didn't stay stock long, having a lift installed and 33s put on so I could take it out with everyone. Riding passenger was only fun for so long and was itching to be the one 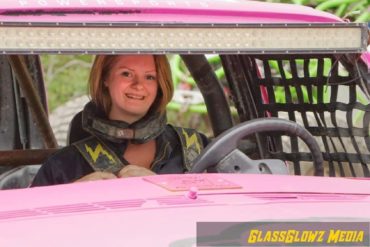 behind the wheel. At the time I purchased it I worked for an auto repair and body shop so painting it was on my wish list. I love my Mopars and being a girl that Panther Pink color had always caught my eye so we made it happen. The Jeep got used and abused for a couple of years with great adventures had, and amazing memories made. Then kids happened so she was set aside as a daily driver and my Jeep was put on hold while I focused on the kids and being a new mom. Some time went by and I had no idea when I would get back into the Jeep world. 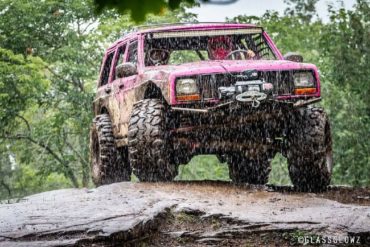 Then one random day in March 2018 I happened to be scrolling through Facebook and saw an amazing opportunity that would again have a huge impact on our lifestyle. Friends were sharing a post from a Facebook page called Heinz57Racing where they had a Jeep for someone committed to continue using in the TMR Offroad Racing Series. They were looking for a female who could race it, fix it and have fun with it! When I saw that it was an XJ I knew it was meant to be and had to message them. I knew XJs like the back of my hand, loved offroading and being a mechanic I could fix almost anything I broke on it when racing. Besides, when doesn't free catch your eye! You would have thought this Jeep was headed to the scrap yard as she was well loved and abused by its previous racer who competed with it in the stock class with it. I'm sure my boyfriend thought I was crazy and was wondering what the heck I was thinking of committing to this. Well, it was the best decision ever. We became a part of an amazing race team and met so many new friends on our journey through the 2018 race series. I couldn't thank Pete and Sharon from Heinz57Racing enough for giving me the opportunity. 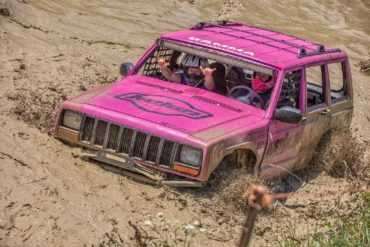 Now let's get back to this Jeep. A well loved 1999 Red Jeep XJ that needed some TLC and repairs before we could even start racing it again. It had a small lift with some 35" Boggers on it and had been parked all winter after its last race it sheared the front axle lower control arm mount off. We drove the couple hours away, picked it up and brought it home to the garage where we started its overhaul. I say overhaul as you wouldn't even know it was the same Jeep once I was done with it. We installed another trussed Dana 30 front axle, suspension seats and lots of other new parts. Once the mechanical problems were fixed I knew I had to add a personal touch to it's appearance. That meant painting it! I used the tintable Raptor Liner kit and of course, chose the same Panther Pink color. I prepped the Jeep and sprayed it myself and now you can't miss it anywhere it goes. 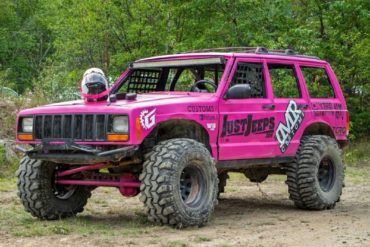 The 2018 TMR Race Series was five different races held through the year, spread all across Ontario. Each race course changed between locations being natural terrain to man-made obstacles that would test your 4WD vehicle and your driving capabilities. Between the rolling hills, loose rocks, and jumps there was an adrenaline rush every time. I was hooked and I loved it. We had some wins and we had some breaks over the 2018 season and ended up placing 4th overall for the stock class. The first race for the 2019 season is May 26 and I couldn't be more excited. New sponsors and a whole lot of new upgrades were going to be out there, skinny pedal down, ready to race the competition and have a great time doing it. I can't wait to see where we go for the 2019 year and what new adventures will be had. 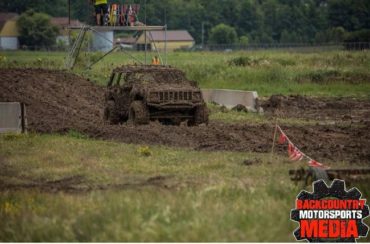 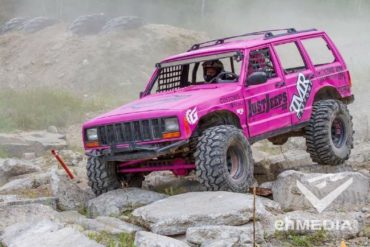