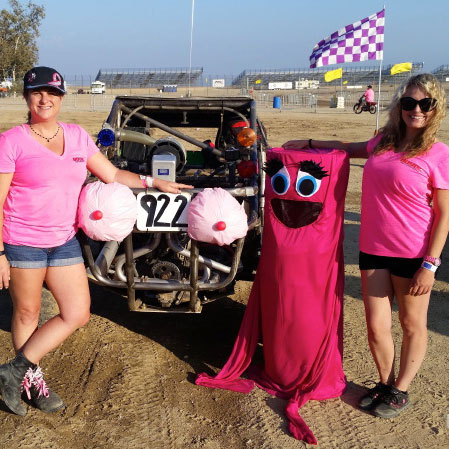 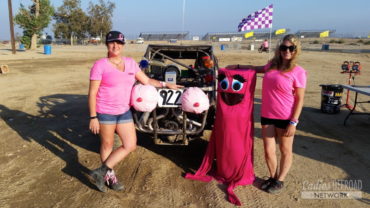 Making a pig fly takes a great deal of hard work, especially a 2,200 pound pink one. Journee Racing, an all female team based in Southern California, will be racing their bright pink off road race buggy, “the pink pig”, to promote breast cancer awareness at this year’s Mint 400. Dubbed “The Great American Desert Race”, the Mint 400 will be taking place March 8-11, 2018.

The Mint 400, owned by brothers Joshua and Matt Martelli, attracts more than half a million spectators. The race was officially established in 1968 and this year marks the 50th Anniversary. The Mint 400 was originally sponsored by Del Webb's Mint Hotel and Casino in downtown Las Vegas. The Martelli Brothers have since taken over ownership of the race and have partnered with the Best In The Desert Racing Association to help host, organize, and run the event. This year, Journee Racing is honored to announce they will act as ambassadors for the sport. Matt Martelli explains, “The Mint 400 organization is wholly respectful of and supportive of all women and feels a social responsibility to promote all women and their accomplishments.” 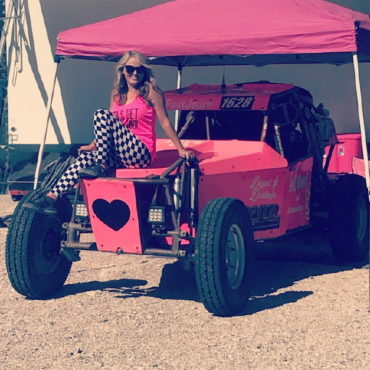 Journee Racing is a dedicated group of off road ladies who will drive their 80HP buggy through 400 miles of dangerous Nevada desert. More women are being attracted to off road racing every year, but they are still in the minority. Of the 450 entries, only nine women teams will be competing. Journee Racing has one remarkable distinction: they are the only female team who independently prep and wrench their own race car.

Journee Richardson is the lead mechanic and driver for the team. Driven and dedicated, this talented lady is almost entirely self-taught. In addition to racing, she will also be competing in the world famous Miss Mint Contest on Thursday, March 8th. Former Miss Mint winners include Wheel of Fortune’s Vanna White and Wonder Woman Lynda Carter. 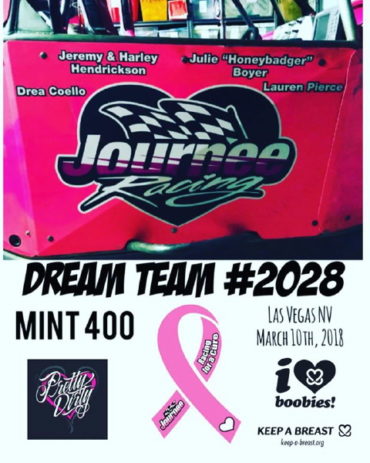 Co-founder Julie Boyer has a personal connection to breast cancer as she is a five-year survivor. “I was diagnosed with stage one breast cancer in 2013 at the age of 38. It was due to awareness that I received at a Breast Cancer fundraising Off road race that I even went in to have the Mammogram. Off Road Racing definitely saved my life,” she explains. Julie has been involved in the off road racing community as a Driver, Race Promoter, and as an Emergency Rescue Nurse for the Best in the Desert Association.

The Keep A Breast Foundation™ is the leading youth-focused, global, nonprofit breast cancer organization focused on providing direct education. Journee Racing and The Keep A Breast Foundation™ will be discussing the importance of breast cancer surveillance on Wednesday and Thursday, March 8-9 on Fremont street during Tech and Contingency. The names of survivors, fighters, and those that have lost their lives will be written on ribbons which can be purchased at the Journee Racing booth or by visiting Journeeracing.com. 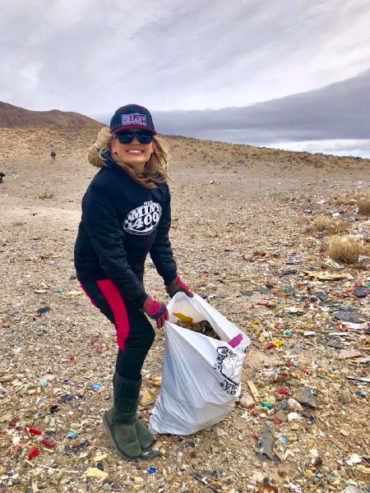 The Mint 400 is more than just a race; it is a week long event. The event officially begins on Saturday, March 3rd in Jean, Nevada with an industry wide Desert Clean Up in partnership with Republic Services. On Wednesday, March 7th, the Race Car Parade will travel down the Las Vegas Strip followed by the kick-off party that evening. During the following two days, spectators will be able to view race cars and teams as they weave their way through vendors lining Fremont street. With 450 race teams, this is the largest display of race vehicles that is accessible to the general public. Come support Journee Racing during this fun filled week!