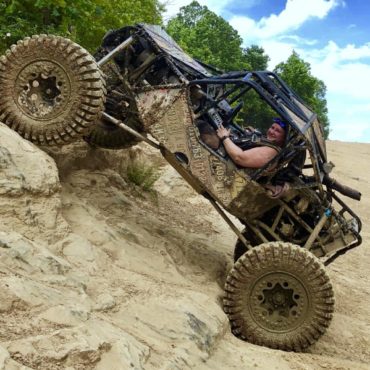 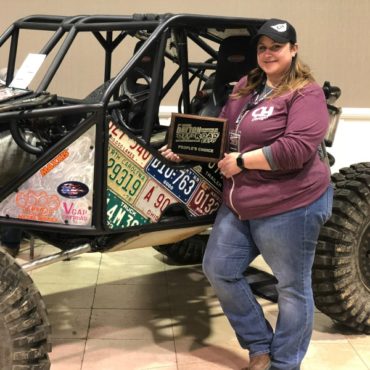 My name is Marissa VanGundy. To Start my story I have to take you back to my high school years. I developed a love of mud and trucks when I was 16 years old living in a small town called Stoutsville, Ohio. My first job was at a McDonalds where the parking lot served as a turn-around for the local cruising strip. Every Friday and Saturday night our lot was packed with kids who were cruising up and down the strip. I would always make a point to find out who was driving the biggest, most jacked-up truck and tell them how much I liked it....and of course ask if I could drive 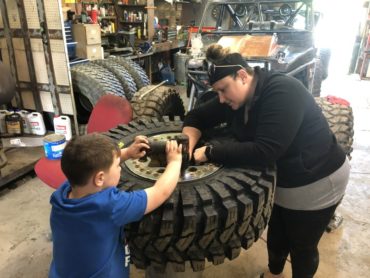 it! More times than not, they would tell me no. A few people would let me ride along for some riverbed night riding. We ended up being stuck a few times, but that is where I realized I wanted that jacked-up truck to drive and take me everywhere. 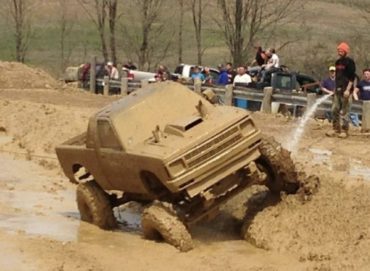 A few years after high school, I ran into an old friend who is now my husband, Kenny. I used to cut his hair when he was in high school and we had lost touch for a few years. We started talking and meeting after work to have a few beers. Eventually, he asked me if I wanted to go mud running. I of course said, “Hell yea!” We took his old 78 GMC to one of the neighbor’s property and rode for a few hours. Now, eight years later, we still have a love for everything off-road. 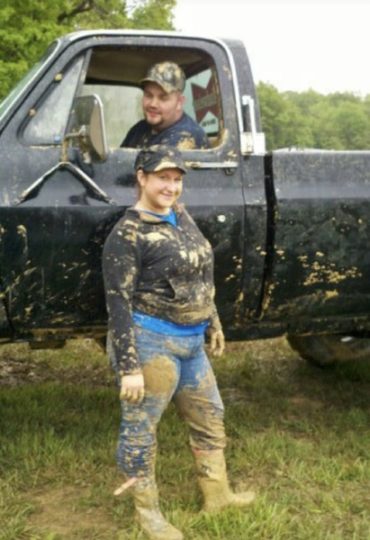 When we first got together, I found out that he, his dad, mom and brother and sister-in-law would mud bog together as a family. My father-in-law has an 85 Chevy that he ran tractor tires on. My mother-in-law had her very own watermelon pink YJ. My brother-in-law and his wife had a few different trucks over the years, from an S10 to a full-size square-body Chevy. Kenny and I have had a few different mud bogging trucks also. The first time I ever made it out of the mud bog pit I 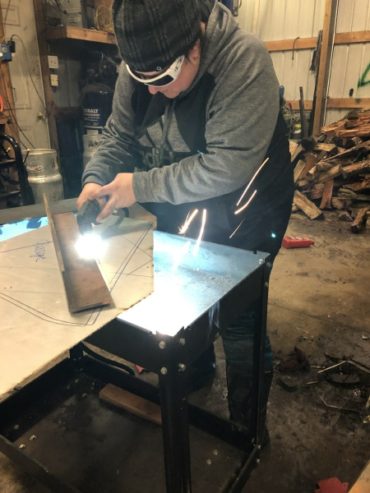 was in a S10 Blazer. Kenny said that he would ride with me and shift for me. Little did he know he was in for the ride of a lifetime. I put the pedal to the floor and I ended up ramping it off the side wall and back in the pit. I made it out in just over seven seconds. I hit the side wall so hard, I wedged rocks in between the wheel and the bead of the tire which made it go flat.

That was one of the best days and was my first time out of the pit! After that, we ended up getting a Chevy S10 and put a 468 big block in it. Man, that truck was fast! The first time I ever drove it was at HDMP mud bog. However, after the last time, Kenny said that he wasn’t going to ride with me. My buddy, Dustin Osborne, said he would ride with me. We pull up to the line and I take off. As we are going through the mud pit, a huge wave of water and mud comes up and it covers the windshield. I couldn’t see anything and had actually stopped on the wall in the pit. I looked at Dustin and asked him if I should keep going. He laughed, said “NO!” and he shut all my switches off! After three years of mud bogging, we decided to try something different.... Trail riding 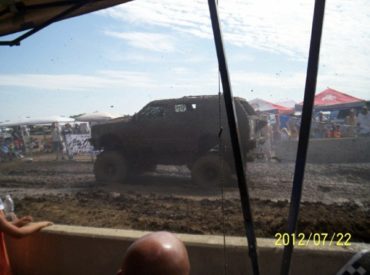 Our first buggy was a little black Samurai. She was fun, but not quite what we wanted. After some wheeling and dealing, we ended up with a green buggy made from a Toyota tube chassis. We wheeled in it together for a few years and I decided I was tired of riding passenger. I wanted to drive. I was unable to reach the pedals in the green buggy so we got a purple truggy. It had a 4.3 chevy motor with Toyota axles. She was pretty, but I still wanted more then what the purple truggy could give me. Thanks to Facebook Marketplace, my husband was able to do some trading and I finally got what I wanted. 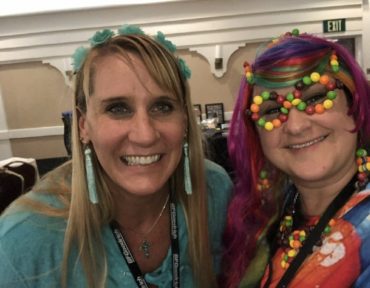 I now have a full tube chassis, rear engine, Toyota-powered buggy! I had a few kinks to work out the first year I owned her. Once I got the issues fixed, I was able to relax and learn how to drive her. Now that I have had some seat time in her, I am figuring out how to use my rear-steer to my advantage. Each time I get to take a ride in her, I learn something new and mostly learn something different about myself. 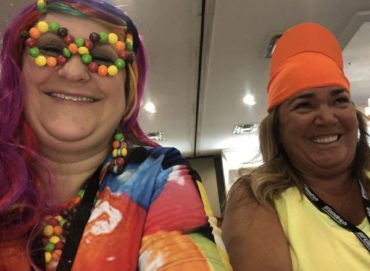 Along with learning new things, I had gained the confidence to be able to come up with an idea of how I wanted my buggy to look. The first thing I did was get rid of the paint job. It was baby blue with a hot pink motor. I painted the whole thing flat black. Shortly after I painted it black, I took Charlene Bowers’ marketing class and learned that the least published vehicles were an all-black vehicle. After hearing that it was less likely to be published, I decided that I needed to do something completely different with my buggy and started brainstorming my ideas. While I was in Florida last winter for vacation I visited a flea market and I found a ton of old license plates and bought as many as I could. I brought them home and got started on my vision. Even though my husband did not see the same vision, he stayed by my side and helped me when I needed it. 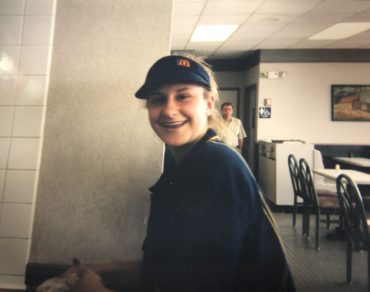 After a little time trying to plan how to bring my idea to life, I grabbed the plasma cutter and started cutting away. I started drilling and riveting like crazy. After I finally got everything exactly where I wanted, I got the skins mounted and they looked amazing! I added a hood and a few other body panels so that I could apply some stickers. I am proud to say that I designed my buggy exactly how I envisioned it!

Last year I organized a benefit for a fellow offroader and his wife who had a brain aneurysm. While reaching out to others to support the benefit, I learned my friend had competed in the first ever Ladies Offroad Network Challenge. I became interested and looked up the information on Facebook about becoming a member and competing in the challenge. I was so back and forth about doing it because I was so afraid, worried that people would give me crap about it or make fun of me for it. I asked my best friend what she thought about it, she encouraged me to go for it and so I started to try the challenge. Choosing to go for it was the best thing I have done for my self this past year. I did not make it to the top ten but I gained so much more.

I wanted to get to meet other women that do what I do, and love it. I wanted to learn more about everything offroading. After the challenge, I decided that I was going to the convention! That was the most amazing trip EVER!!! I was able to meet so many women that wheel and see so many different vehicles. I met women from all over the United States, not counting the women and men that where there to teach the classes! I took something new away from the classes each and everyday. I was also able to make new friendships with women who I would have never met if it had not been for becoming involved with the Ladies Offroad Network this past year. I have learned that one of the greatest things about the offroading community is not only making new friends, but also gaining another family.

As I sit here typing my story for this year’s challenge, I am so excited for what is to come this year with the Ladies Offroad Network. I cannot wait for the next chapter, the next trail and mostly the next great adventure. I cannot wait to see what I get to add to my challenge story for next year!