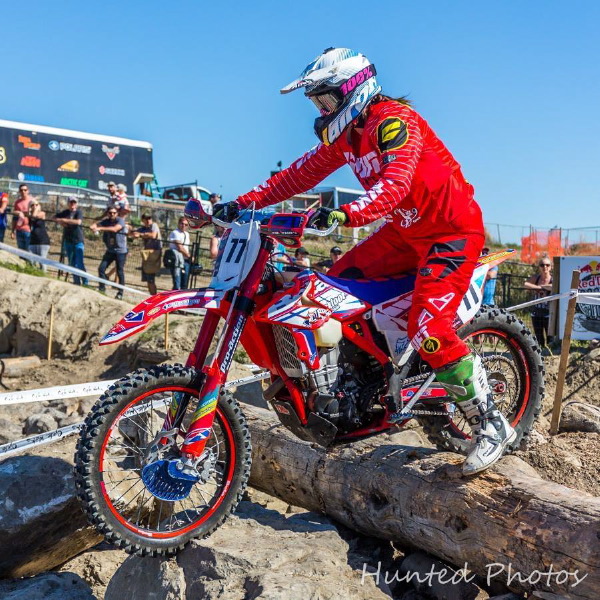 King of the Hammers Lady Rider Bio for Melissa Harten 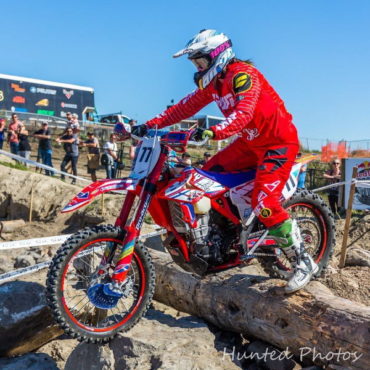 I'll be racing alongside my boyfriend, Stephen Foord.

How many times have you raced King of the Hammers?  This will be my second year competing at Ultra4's King of Motos. We finished the team event last year in fourth place.

How did you get into Ultra4 Racing? Stephen won the KOM team event in 2014, and he came home raving about how much fun he had.  Then, the following year I saw some women I knew enter, and I thought why can't I do this race too? I've always been drawn to the harder trails vs. the high speed, so I wanted to finish this "extreme" event.  It finally came together for 2016, with time off work, so we decided to enter as a team.
I started riding in 2008 at the ripe old age of 24. Then I took two years off to become a full-time fire fighter with the City of Calgary (as I didn't want to risk injury during the hiring process). I'm lucky that my job has the flexibility that allows me to pursue racing. I started racing seriously in 2013, so I have some ground to cover to catch up to the rest of my female competitors. A lot of people think that success in racing means that you  have to start riding as a kid, but I think it's important for other woman to see that you can start at any point in life. If you set a goal and work hard for it, it can happen anytime.

What has been your most exciting achievement in Ultra4 Racing?  My biggest achievement was finishing the race last year and coming out with a relationship at the end haha. I think over the course of the day we were on the bike almost 8 hours with no arguments, and we still like each other enough  do it again... so WIN! haha 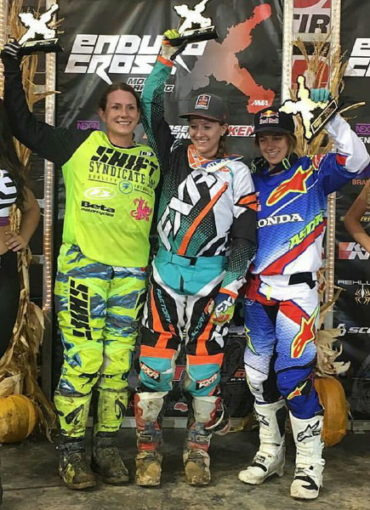 What does race prep look like in your world? I haven't done any riding since November; between cold temperatures, too much snow, and winter is when I work extra shifts in order to have the time off for racing. So I make sure to hit the gym as much as possible. I work out at MOST Physical Preparation in Calgary. They are a Crossfit based gym, and I trust the coaches and programming to keep me ready for riding.
In the types of racing I usually do, we are rarely allowed to pre-run a course. In EnduroCross, we do have practices and qualifiers. However, for everything else, you don't have that advantage. We are often allowed to walk the course though, so that's what I will do when I have the chance.

There isn't really much paperwork I have to do, other than the usual race entries, waivers and such. Sponsor relationships are super important though, so I spend a decent amount of time talking to them.

What are you looking forward to at this year's King of the Hammers?  I'm excited and nervous for the night race. I find my eyes play tricks on me in different light settings, so let's hope I don't fall off the top of a mountain haha. I would really like to see the rest of the KOH week, but we always have to leave the day after our race to start driving home for work. One day when we win the lotto!

What are your goals for this year's King of the Hammers?  I really want to finish all three motos. I'm not worried about trying to win, I just don't want any DNF's. My boyfriend is the stronger rider and I know he can finish on his own, so the fact that he is willing to enter with me as a team, I want to make sure I can finish.

What excites you about racing?  I love the challenge and the feeling of accomplishment when you finally finish. It's a high.

What is a piece of advice that you have been given? The more you race the more people you meet and insight you get, so it's hard to think of just one because I'm always learning so much. I think for me: "It's ok to be scared, but don't let that stop you from trying."

Tell us about the Team that Supports you. BETA Canada has supported us the last couple years and we couldn't be happier. We absolutely love the bikes and trust them to always finish a race!

Melissa Adds: Thanks to all my friends and family that never see us because we spend all of our time riding, traveling, and racing.... I know they might not understand it, but  it's our passion and lifestyle. So, thank you for supporting us.