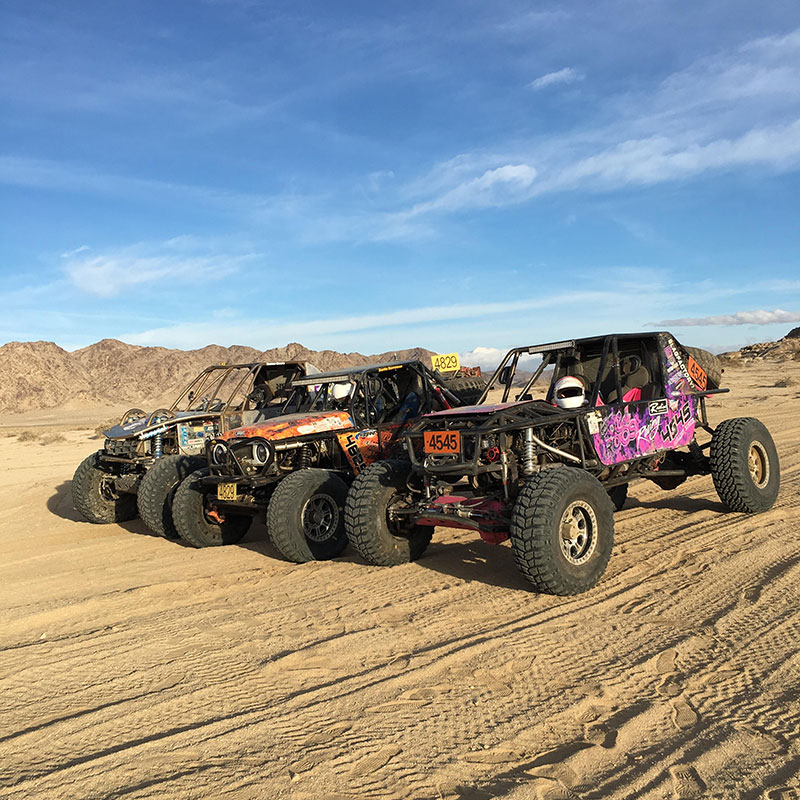 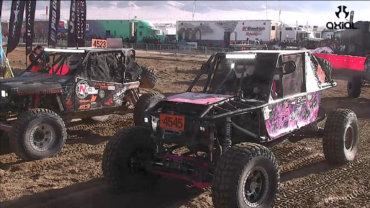 Going into the beginning of race week I was terrified and thrilled all at once. I was excited to get back into the race car after 10 long months of being unable to race with the new baby and scared to death of not preforming well.
We pre ran and shock tuned Monday and Tuesday and packed the car with tools Wednesday.
Thursday, race morning, me and Thomas got in the car and left the finished line only having 2 days of drive time in the car - so nobody knew what to expect. We left the start line and headed to the first pit at mile marker 12, we decided to skip the first pit to put more distance between us and the cars we had passed. The car was doing excellent up until mile marker 30 where it started acting like it was out of gas. We pulled over and immediately went to the gas tank and saw that the fuel filter was brown and milky like dirt was in it, so we bypassed the filter and took off again. Around mile marker 40 the car started acting up again and the regulator was now full of dirt, we took it a mile at a time with my co driver jumping out every mile cleaning the regulator, putting in back on, and jumping back in the car just to drive another mile and to do it all again - knowing we only had 7 more miles until the next pit. 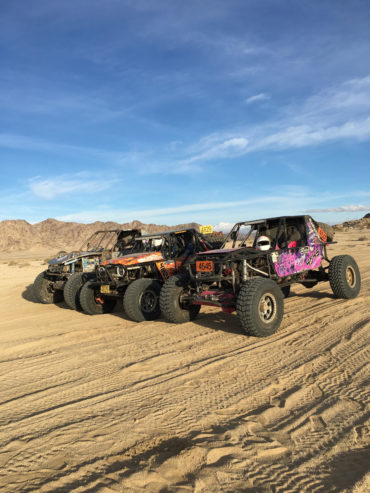 Finally around mile marker 45 the car wouldn't even start so Kurtis came by and tried to pull me back to pit but we had no power steering and navigating through the rocky turns was an obstacle in itself which lead to the winch rope breaking not once but twice. The second time it broke we were only a mile from pit and we were exhausted. I felt like we had used all of our resources.  Me, my codriver, and my car were exhausted and the realization of us not preforming the way I planned set in and I let it take a toll on me. I was a mess.
Never in my life have I gave up in a race, never have I said I'm done or there's no other options until then. I was tired, I was upset, and I was disappointed. We were doing so good I thought this was my year to finally finish the hardest off-road race in the world but it wasn't and it killed me. I called back over the radio to my team that we were done and to come get me but they refused. They knew that wasn't the person I was and told us to figure it out, get to pit and let's continue the race so we bypassed the regulator and took off knowing dirt could be flowing into the motor but we didn't care we only had about a mile to pit and we finally got there, got the car fixed and headed back to hammer town.
Overall the car preformed amazing and I know it's going to be a great car this season.
I have to thank my Mom and Kurtis for making everything happen for me and giving me all the opportunities I have.   But most of all I have to thank my codriver Thomas and pit crew.  Without them I probably wouldn't even have a car. The last month Thomas took time away from his family and his job to help make sure the car was ready to get on the trailer and go the Hammers. Our pit crew made sure everything at camp was taken care of.  They were there to help with the baby, cook dinner and even making sure the cars were ready to go on race day - thank you for everything you guys did this week.
Lastly thank you to our sponsors without you there wouldn't even be a racecar.