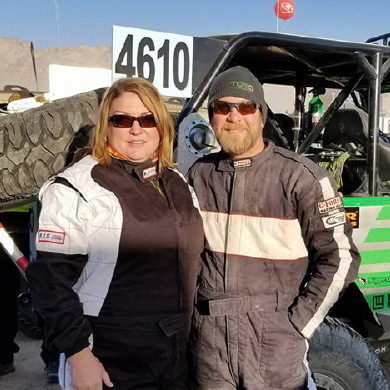 6am line up for the Smittybuilt Everyman Challenge at King of The Hammers. The EMC race combines 3 classes, Legends, Stock Modified and Stock Class. The EMC is one of the biggest races of the week with 135 entries. The 2018 Stock Class was the biggest ever with 27 entries ranging from Jeep LJ's, ZJ's, XJ's, JK's, TJ's, and a few Toyota pickups. We love the stock class because it's truly an attainable class for the average Joe or Joeanne to race in. This class is limited to 35"tires, Stock engine blocks, Stock frame, stock body, and 2.5" smooth body shocks with remote reservoirs. 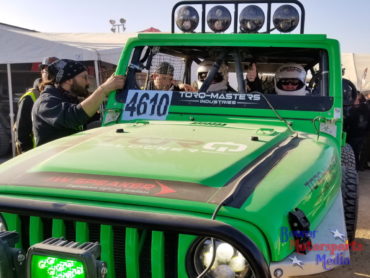 At 8am the first cars (cars, short for race cars) left the start line. Legends and Stock Modified go out first as they are much faster. As we rolled up to the line a bunch of my Rebelle Rally friends working Media for KOH were there cheering us on! Their cheering made the butterflies fly away. We are ready, the Jeep is ready, our pit crews are ready, Erik Jokinen and I are ready. We started 8th and left the line at 8:28 am.
If the first few miles of race course were an indication of the remainder of the race, it was going to be a brutal day. The desert loop, lap 1 as they call, it is not a piece of cake. Two miles in we hit 2 huge hill climbs, one was covered in loose steep rocks, the other deep sand. These hills were chaotic with multiple teams trying to climb at once, many having to back down and try it again. Last time we raced KOH there was a similar hill over by Back Door, in 2016 I had to hit it in low range. This year with new Milestar Tires Patagonia 35" tires and a Superchips Trail Dash 2 performance tune, we hit the same sand hill near back door during pre-running in high range and got up quickly and easily. Knowing the clear performance enhancement of the tune and tires I hit these first 2 hills in high range, passing multiple teams attempting the hills. Awesome. 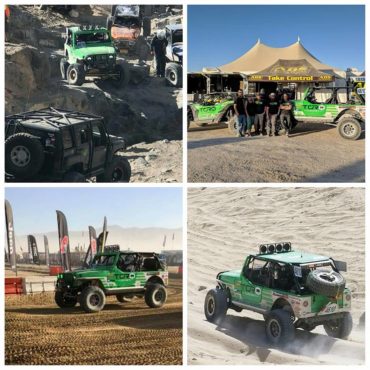 The next 20 miles were whoops, rocks, sand, and choppy rocks. The Jeep and occupants were taking a beating. The Jeep was doing fine, me not so much. A few mile into the race I started to notice something was wrong. We stopped 3 times on the way to Cougar Buttes, by the time we got there I could barely breathe I was in so much pain, I had severe kidney pain. I had to make the devastating decision to get out of the car. Erik called over the Rescue 3, Inc. volunteer paramedics to check me out. He wasn't leaving until he knew I was ok. My friend Andrew McDaniel from Rescue 3 knows us from the Rebelle Rally, the Mint 400 and KOH, luckily he was posted at Cougar Buttes. They checked me out and assured Erik I would be in safe
hands. We called our pit crew to ask for a new navigator, Megan Stevenson was the only one in our pit crew with race insurance, and available. Good thing she brought her helmet and fire suit! She agreed to navigate with no questions asked, which I am so thankful for. Erik took the driver's seat and made the Cougar Buttes huge rocks look like a walk in the park. Rescue 3 brought me back to our pits. Erik drove solo 23 miles to Remote Pit 1, trying to read the GPS from across the car, and picked up Megan. 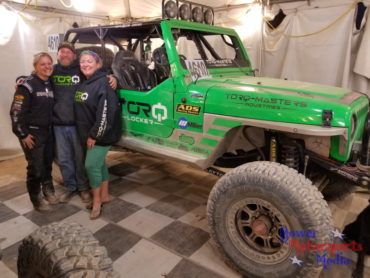 Megan and her boyfriend Brian Wood began racing together a few years ago. Based near Fresno CA, they have a Trent Fab built race car. Last year they raced King of the Hammers, and this year they came to support one of our East Coast tent teammates, Jim Widmaier from PA. Megan and I got to know each other through Facebook and at the Ladies Offroad Convention. She also won the Ladies Offroad Challenge and spent 10 days chasing the Baja 1000 with Charlene Bower and BFGoodrich Tires. To put it concisely, Megan is a badass with a big heart and plenty of Talladega Nights quotes.

They then drove from Remote Pit 1 to Main Pit, 15 miles, crossing through a Marine Base with whooped out sandy tracks, then high speed across the dusty, low viability Melville dry lake bed. The last mile is one of the toughest, most dangerous of the course, down Resolution, and down Back Door. The Back Door waterfall is about 15', vertical, with a hole at the bottom. We had pre-run it in the Jeep and UTV, so Erik knew his line. Megan kept an eye on the passenger tire from the passenger seat, making sure they were in the right spot, and they drove right down the waterfall, making it look easy. 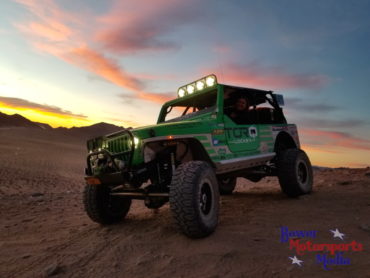 Back at the Main Pit, I arrived just as 4610 was coming down the Short Bus trail and was in view. They flew into main pit, on a mission for fuel and cold water. Erik was very relieved to know I made it back and was feeling ok after a couple waters and a Gatorade. He could now fully concentrate on the race. (Side note, they had the AC running in the Jeep. There's not many (or any that I know of) running AC, but it sure does help when you are stuck in a trail backup, roasting in your fire suit and helmet. They ran the AC most of the day.)

Then it was Main Pit to Remote Pit 2a. Choppy, rocky whoops, those 2 big hill climbs again, then a right hand turn across the valley towards some of the hardest rock trails on the planet. Erik was charging hard across the desert, pushing the Jeep harder than ever before, 55mph and 60mph in the desert (which is superhuman for a Jeep). It takes a lot of work to get there, overbuilt axles by East Coast Gear Supply, Clayton Off Road pro suspension, ADS Racing Shocks with days of fine tuning, and Corbeau USA suspension seats to buffer the bumps. About a mile from Remote Pit 2A a rattle formed in the front end, at first he thought the motor threw a rod. The rattle became a clank, and that's when they knew something had let go. Erik called ahead on our Rugged Radios to tell the crew to get the welder ready, we will probably need it. 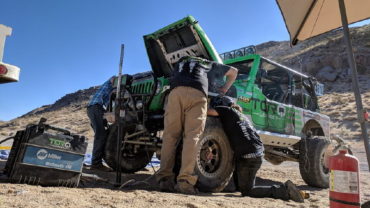 Our pit crew is made up of friends and fellow racers, paid in hoodies and snacks. They travel 2,500 miles to help, and enjoy the experience. It's no small feat, we appreciate the help, Michael Maskalans, Alex Lenhard, Michael Abbatte, Zach Tarbell, Jesse Apostolakes, Matthew Garofalo, Cusaic, Megan, Brian, and racers Karl Knack and Jim Widmier.

They found the clanking noise, the top of the drivers side shock tower had blown out. With some various sized washers and ingenuity from the crew, Zach welded up a repair using our Miller Electric Welders Multimatic 200, using the MIG setting on this multi process machine. In total about an hour in the pits then they headed off for the rock trails.

Then came the Hammer Trails. The Stock Class course included 10 of the Hammer Trails, Boulderdash, Upper Big Johnson,
Clawhammer, Fissure Mountain, Sledgehammer, Chocolate Thunder, Jack North, Jackhammer and Compaction Hill. The Stock Class has multiple bypasses to cut off more of the Hammers trails due to time constraints. Even with the bypasses, few in this class ever finish the race. There are approximately 27 miles of Rock Trails. For recreational off-roading, maybe you would do 3 trails a day. The Stock Class race teams attempt 124 miles of desert and rocks in 10 hours.

4610 entered the rock trails at 3:00pm. Along the way, they encountered broken and recovering teams. They helped winch a few and winched themselves on Clawhammer. Their progress ground to a complete halt when they hit the Sledgehammer trail. There was a bottleneck at the Plaque Line with broken vehicles and everyone in line slowly winching. Megan pulled cable after 4610 slipped off a rock, jamming the Jeep between a boulder and the Plaque Line. This backup cost the team another hour. Erik radioed back to Basecamp to tell us his position, and that there was no physical way we could get to Remote Pit 2B before the 6pm cutoff time. I responded from base camp to ask if they would keep going or call it a day. Erik says "I'M GOING TO CHOCOLATE", we could hear the motor screaming in the background, everyone at base started cracking up. 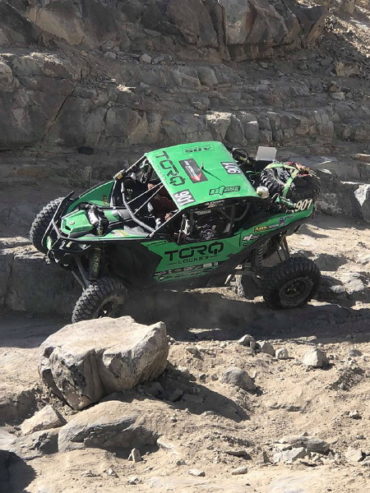 Chocolate Thunder is one of the main spectator areas, there's a big brown sand hill on one side of the gully, rocks on the
other and a mixture of both in the middle. His last trail of the day, Erik 'Rickey Bobby'ed' it, taking the left line, a clean run up the notorious trail with a cheering crowd littering the hillside. Our Aluminum Body Armor by Nemesis Industries holds up to Erik 'sending it' which is sometimes the only way to get through these huge rocks with 35" tires. The end of Chocolate Thunder is about a mile from where Erik and Mike broke down in the UTV race. Bittersweet. 4610 turned south and back to Basecamp, the end of our race.

Out of 27 teams, 2 finished within the time allowed in stock class. We may have unofficially finished 10th place, the scoring team still has to work that out by looking at the trackers and seeing who got how far by 6pm.

They don't call it the Hardest 1 Day Off-road Race in the World for nothing. We gave it our all, and even a little more. We couldn't do any of this without the support of our friends, family, and partners, truly. Thank you for taking the time to read our race report, it's not always all about our final score, it's the epic journey to get there and the friends and relationships we build along the way.

Click Here to see all the King of the Hammers 2018 coverage.