“30Pack” Matt is the Tech and Tools guru from Bower Power Hour. He walks guests through installs, tech, buying parts, and more. All work is done either on Matt’s personal buggy or the Craigslisticon, Bower Power Hour Producer Gabe’s jeep for both offroad and daily driving. In this episode of Bower Power Hour “30Pack” Matt walks viewers through the installation of a RCV Axle Shaft and ball joints. 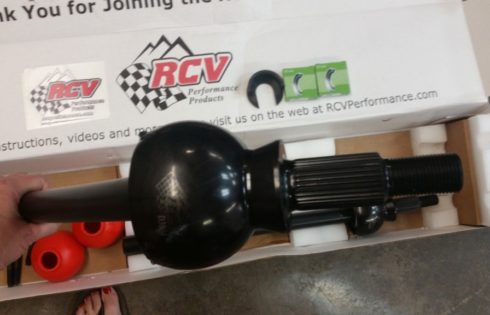 Matt: Today we are going to do the axle shaft and ball joints as the final step before we bolt Gabe’s front axle into his Craigslisticon.

Charlene: We are getting so close aren’t we? Although there isn’t a ton of effort that goes into the install process, we still want to talk about each of the individual pieces because I think you have a lot of insight to both of them. So which one do you want to start with?

Matt: We’ll start with the axle shafts. On this axle we went with RCV 35-spline JK axle shafts, mostly because Gabe had already purchased the 35-spline ARB second hand and we needed to get some axle shafts that would work with it.

Matt: Looking at them now, I don’t really see any advantage over the 30-spline. If he was doing it all over again I’d tell him to just find a 30-spline air locker because the shafts are the same strength since they’re made out of the same material. All axle shaft builders are limited as far as space they have to work with. In the end, they are the same diameter on the outside where the knuckle is. So really we’re not gaining a whole lot of strength, but at least we won’t have a shaft break inside of it. It’ll always be on the outside where it can’t cause a bigger problem. So, I guess that’s a good thing.

Charlene: That was actually really interesting when we got those shafts in and looked at them. The inside had a 35-spline, but out on the stub was more of a 32-spline. So, it shallowed itself out. They did that in order to fit the factory hubs right? Which makes sense.

Matt: The biggest limiting factor is the space you have to work with. They just can’t build big, heavy duty things because there is no room for it. So, it’ll be great; especially with what they’re wanting to use it for, and it’ll last a lifetime.

Charlene: Sure, and I think that that’s kind of another interesting piece. The factory hub is what it is, and if you are going to replace a factory hub, at that point you’re up to the Dana 60 level, right? You are really into the aftermarket pieces and a true 35-spline axle.

Matt: Yeah. You are really committed to the factory hub because no aftermarket company is making a bigger version. With the way the hub works, it is actually held together with the axle shaft, and you’re completely limited by the spline. It’s pretty hefty. It’s a 32-spline; it’s all good.

Charlene: The other thing that I thought was interesting from the RCV side is the materials that they use are the 4340 chromoly aerospace (the 3M aerospace). So what they’re saying, is that it is yielding twice as much strength as your stock axle shaft would. Even the person that I talked to at RCV said, ‘yeah, there’s really not a huge difference over the 30 to the 35 other than what you are putting it in to,’ but it’s definitely double-strength over the OEM axle.

Matt: Yeah, the aftermarket 4340 compared to the compared to OEM is way stronger, and also it flexes. It’ll actually give, and it’ll twist, and it won’t just shatter like a factory shaft will. So, it’s adding some forgiveness. If you do bind it up then it’s strong enough to take it, but it will also twist a little bit and it won’t transfer all of the load to your ring and pinions. So that’s something to be thinking about too.

Charlene: And then, they said that it eliminates the u-joints too.

Matt: It’s because of using the Birfield-Joint, like Toyota would use a CV-joint, it’s a lot smoother of an operation if you turn and you’re under power. And another thing is, the way the joint works it is just as strong turned as it is straight. So, with a u-joint, the farther you turn a u-joint the more force it’s trying to transfer sideways. It actually becomes weaker. The u-joint is always at its strongest when not turned at all, when it’s straight. When you start turning it, it’s actually applying more force, trying to break it. With the Birfield style joint it’s a smoother operation. It’s just as strong turned as it is straight. So that’s another key point.

Charlene: Yeah. So they definitely have their benefit. We’re excited to have them in there, and it’s going to work great. But as far as what we were looking at originally with that 35-spline, well if we take people back to Season 1 where you did that whole axle-shaft comparison and it was the same on one end as it was on the other end, the JK line just doesn’t necessarily afford that.

Matt: Factory ball joints are Dana Spicer, and they work well. But, when you start adding bigger tires and wheels usually you get a wheel with a smaller offset, meaning that it sticks farther out, and all that does is put more leverage on your ball joints. It’s like putting a big lever on it, it’ll wear them out a lot faster. When they wear out you will start to feel them a lot more. You’ll see the tires camber in on the top. So, if you ever notice when you are going over bumps you feel a little bit of death-wobble or something shakey, or if you’re walking up to your Jeep in a flat parking lot and you notice your front tires are leaned in a little bit but your back tires are straight, it’s usually a good indication that your ball joints are bad.

We went with Poly Performance, they make them out of a lot better materials than the factory. They last a lot longer, and they also come with a breakage warranty. If you ever break an axle shaft it puts a lot of stress on the ball joint, and they’re guaranteeing that those ball joints won’t fail prematurely. It won’t fall apart on you.

Charlene: What kind of maintenance do we have to do to our ball joints so that they don’t wobble out?

Matt: Definitely grease is your friend, because they are under a lot of load, which is the leverage of the bigger tires. Staying up on top of greasing them every once in awhile, and making sure the boots don’t get torn is key. You also have to be careful with the rubber boots that go on it, if those get torn dirt can get into it. If dirt gets in there it’ll just grind away and make the joints get loose faster. And, if you live in a wet environment or you drive through a lot of water, grease is also important to keep the water out. The water is the worst thing for them, because the water will get in there, start rusting everything away, and they’ll wear out pretty quick.

Charlene: So if you are a mud and water person you need to be on that as much as you wash your vehicle pretty much.

Matt: When you grease it, and you pump the grease in, you’ll actually see it pump the old nasty grease out. So that’s what you want to watch for. You watch for the fresh grease coming out.

Charlene: Well, we’ve been watching you do all this install work, and it looks like you have a pretty fancy tool that you used on the ball joints.

Matt: Yes, it’s a Snap-On tool. It’s expensive but you can justify the price when you do this all day every day. The beautiful thing about that one is that it holds all of the different fittings and pieces on so you can work it with one hand. Most ball joint presses, everything is trying to fall apart as you try and set it up, but instead all the different size cups and adapters just snap right on to it. It’s a favorite of mine because it makes life easier.