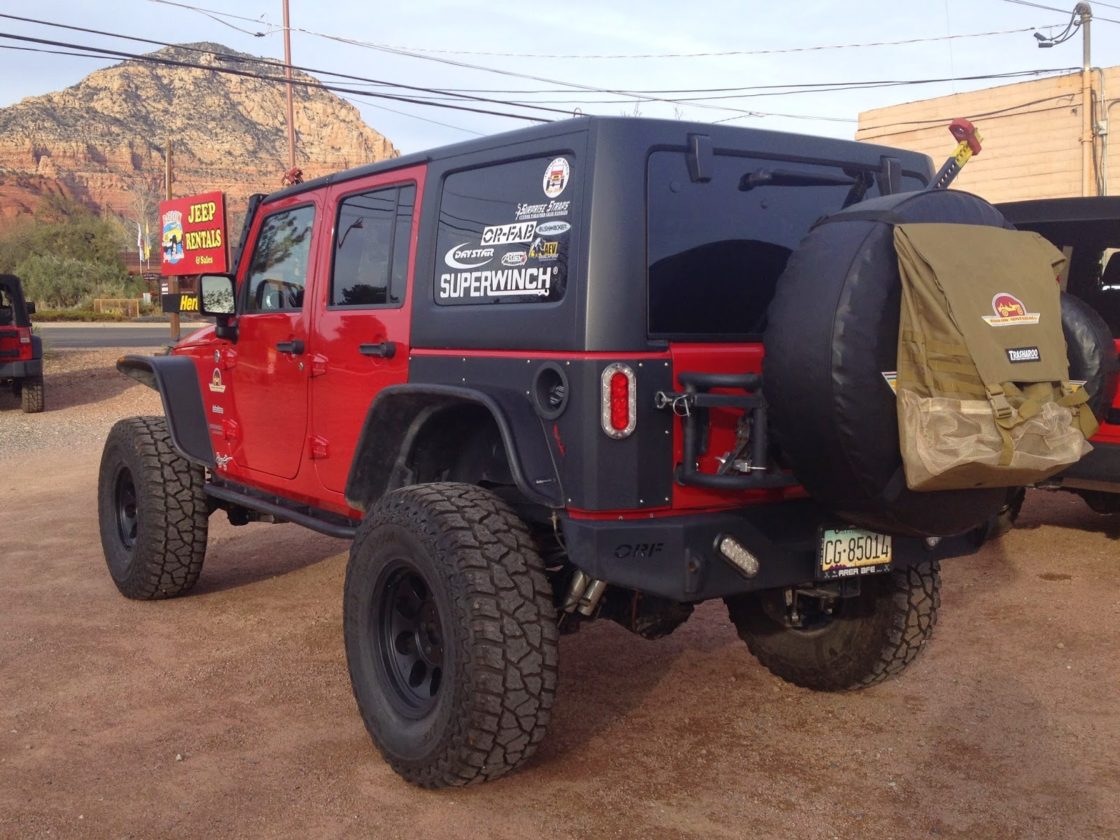 This story was submitted by Nena Barlow from her blog, Trailwise. You can read the original post here: Humble Pie

Even when I am teaching, I learn something new every day. This is a good thing! I encourage clients to always look for the learning opportunity—no one ever “arrives” to where they know everything. We can always find new knowledge and continue growing.

Frequently, there is also the opportunity to reinforce “old” lessons. This week offered me just such an opportunity. Although I frequently joke about “Do as I say not as I do”, I had to eat that joke out in Glamis.

My oldest work Jeep is Greta, my red 2012 Wrangler Unlimited Rubicon. Since this week’s training was focusing more on navigation and easy desert driving, rather than hardcore dune-running or rock crawling, I took this Jeep in spite of an ongoing mystery noise I have been hearing for six months now.  A noise I had been attempting to eliminate without success. It was a metal-on-metal light tapping noise heard since summer, when she is articulating or compressing. I replaced control arms, skid plate bolts, checked brackets and mounts—everything I could imagine. When I had Billy weld on two new nuts to hold on the front of one of my skid plates, I was sure we had finally solved it. But on the first day of the training on easy terrain, I heard that same old familiar noise. “No worries,” I thought, “She’s an old Jeep—she’s going to make some noise sometimes.”

Now, those of you who have been on trips with me know that one of my pet peeves is when people say “It’s a Jeep, it supposed to make some noise.” My reply is always “No, if something is squeaking or rattling, something is worn or broken and you better figure out what it is.” Enter Greta’s mystery noise.

After a successful morning of dead reckoning navigation practice, we were headed back to the main road to move to another area. As the road flattened out to hard-pack dirt, I accelerated to about 30 mph, and just as I merged onto the main road, I hit a small tire rut and I heard that same smacking noise, but slightly louder. Suddenly, I smelled motor oil. I stopped immediately, hopped out and saw motor

oil pouring out from under her. I quickly turned off the engine and then crawled underneath to investigate.

Well, I found out what that mystery noise was. Greta is outfitted with an axle truss, which raises the total height of the housing about 3.5-inches. When she was outfitted with this 20,000 miles ago, along with new springs and bumpstops, everything worked together flawlessly. After 20,000 “Nena” miles, the wear on her bumpstops and the softening of her suspension was now allowing the top of the axle truss to tap the upper front part of the oil pan. And, with one last good jounce over that rut, I cracked the oil pan, exposing the oil pump and timing chain and spraying motor oil out.

I had the good fortune to be on a flat main road, so towing was the obvious option. If I was out in the middle of the desert, or by myself, or no way to get help to me, I would have been trying JB weld, duct tape and bubble gum to try to hold in enough oil to drive out.  If I had been simply on a private trip, I would have been totally focused on just getting back to where I could repair the Jeep. But, since I was in the middle of a training, the show had

to go on. So, I called Jesse, 4 hours away in Sedona, to load up another Jeep and start heading my way. We dragged Greta to the side, transferred a few things and crammed in the other Jeep to continue with our navigation exercises for the day. Just before dark, we travelled back to where we parked Greta, Jesse arrived, we swapped Jeeps, and I headed back out into the desert to set up camp, and continue for another day.

Those who know me well immediately concluded that I had a particularly spectacular airborn moment and hit really hard on landing. I will be the first to admit to many such previous instances (hence the status of the bumpstops), see incriminating videos here:

Fun at the Cinders

...but this time it was just a small bump, like hitting a bad pothole that was the final straw. Did I deserve it? Not for that exact moment, but absolutely for all the others. Did I learn? Oh, yes, but not that the driving technique was poor, but rather that I didn’t listen to my own advice “if you hear a noise, you better figure out what it is…”

So, what to do about preventing this particular problem from occurring again? I am certainly replacing her bumpstops, new springs while we’re at it, and possibly considering some longer control arms to change the arc of travel WHEN I do bottom out again. This is the fodder for an entirely different article titled “What Happens When We Start Screwing

Around With The Original Engineering”, but that is for another day.

As I write this, Greta is suspended on the lift, waiting for her new oil pan and pump, and I also see that her front driveshaft is starting to wear out. And is that a kink in her winch line? Sigh. Well, I also always say “4-wheeling is a pay to play activity!”