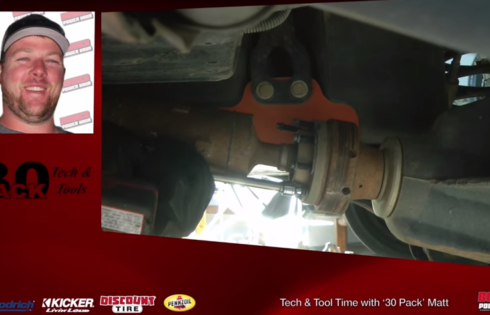 Matt: Today we are going to talk about driveshafts, how important they are to your vehicle, and the different steps you can take to maintain them or upgrade them if you see necessary.

Charlene: Why would you upgrade your driveshaft?

Matt: There are two reasons why you would upgrade. Anyone who does any aftermarket work on their vehicle might think about upgrading their driveshaft. The most common reason I see coming in the shop (or broken down on the side of the road) is maintenance. A lot of the factory drive shafts are a lifetime-series joint, where the grease that comes in them is the grease that stays in them, and you never need to grease it. The problem with that is, if you start going off-road, you live on a dirt road, or drive in rainy or salty conditions, the elements get in there. The seals discontinue working and the grease leaves.

Charlene: So maintenance for a drive shaft is greasing?

Matt: Yes. The more grease, the better. I don’t think you could ever have too much, especially on a constant velocity (CV) driveshaft. The only thing extra grease is going to do is make a big mess out of everything. You usually want to change your grease about every other oil change especially with something that is a geared-down off-road vehicle that is going to see some highway action. Let’s say you do your ring and pinion and you have 5.13 gears in your axles, your driveshaft is spinning that much faster. So grease is the number one thing.

Matt: When it comes to upgrading getting greasable u-joints is smart and also very important.

Charlene: So when we decide to upgrade, what are some considerations we need to take into account?

Matt: First you have to recognize the reason that you’re upgrading or the reason you are replacing it. The factory vehicle that drives for 250 thousand miles on a factory driveshaft is going to be fine, just put another driveshaft in. Now, if you are going out wheeling and you are putting dents in your factory driveshaft and you’re grinding on rocks and the joints are blowing out because they aren’t greased, upgrading to an aftermarket is probably the way to go. It would be money well spent just from a longevity standpoint.

Charlene: Alright, well let’s move into the “now we’ve decided to do it.” Now what?

Matt: There are a lot of different options. So, if your vehicle, like JKs, run a CV-type of joint, they’re known to fail and the driveshafts are weak. The best way to upgrade those is to go to one of the aftermarket companies like JE Reel and buy a kit from them because it’s going to be sized correctly and everything is going to work. If you’re doing it yourself, you need to lay under your vehicle and look at your transfer case to your transmission output and take some measurements.

Charlene: And that’s for the 1-ton axle?

Matt: That’s a 1-ton u-joint. That’s really common on a lot of the aftermarket products because if you are going to upgrade it, go with the 1350 u-joint and get a lot of the strength. The next step above that is the 1410 u-joint, which is a 1-ton u-joint but it has a little more angle to it on some applications. That’s the same step where the cross gets bigger. So a 1350 to a 1410 has a bigger cross but the same size u-joint caps. Knowing that everything corresponds, it might sound daunting, but if you lay under there and take some measurements you can figure out what you have.

The other way is yokes. There’s a lot of different yokes. One driveshaft yoke on a factory vehicle might use straps, to gain some strength and durability for bouncing on rocks, you would go to a u-bolt style yoke where it actually uses a u-bolt and 2 knots. If you hit it on a rock it’s not going to break it right off, because everything is bigger.

The next step after that would be upgrading your driveshaft to tube. A factory vehicle has a real thin-walled tube, even some pickup trucks have aluminum or some race car guys use carbon fiber, because rotating mass kills the horsepower.

The factory loves to show horsepower numbers and fuel economy. They skimp on the driveshaft materials, with what we are doing in off-road we need to up the material. 1/8-inch wall and 1/20 wall tube is common, a lot of guys will want to go 3/16 or 1.4-wall especially if you’re driving over boulders. As soon as a driveshaft gets a dent, that’s a weak spot and it just turns into a pretzel. The biggest problem with upgrading tube size is, all of the tube yoke and slip yokes and all that stuff is sized to work on a certain inside diameter of the tube. So, if you have an 1/8-inch wall 1.20 wall driveshaft and all the sudden you want to go to a 1/4 you would actually instead of doing a 2-inch 1.20 wall you would do a 2 and ¼ quarter wall to keep the same inside diameter to work with the same parts you have. Every driveshaft builder will know how to upgrade the size, some machine work might have to come into play. 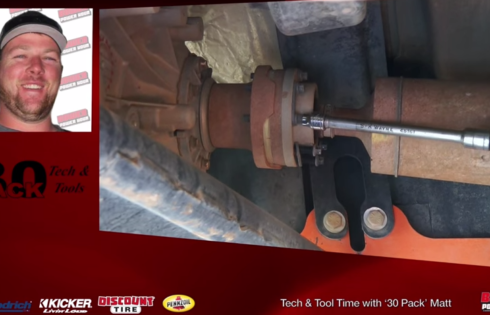 Matt: But, usually 1/8-wall is good unless you are driving straight over the top of every boulder out there.

Charlene: There are certain people that might be listening that need that! (Laugh) But, that’s actually really interesting information. It makes a ton of senes. Your rotating mass definitely kills your horsepower if you have a lot. At the same time the race vehicles and the off-road vehicles we are dealing with, either if you’re racing or off-roading, you may not necessarily be going super fast and don’t need it. It’s better to have the part that lasts to the top of the trail.

Matt: You want the durability more than the weight savings.

Charlene: Exactly. So what we have been doing in the shop recently with the Craigslisticon is we re-did the entire front-end, and then we found a Craigslist rear-end, and now we are measuring to get the correct drive-shafts. So, while you guys are measuring, what are you really looking for?

Matt: The best way to measure a driveshaft is from center of u-joint to center of u-joint at full compression and full droop. So you get the full travel of the driveshaft in your measurements. Most of the time, with a 4-link suspension or an A-link type suspension, you’re not getting a whole lot of travel. Most of the time just getting a measurement at ride height works. The problem with the Craigslisticon is that Gabe drives it everyday. The Currie 60 that we got for the rear is a 1350 u-joint and the factory Jeep transfer case has a rzeppa joint. We need to do some backwards math and figure it out: “if we change the yoke on the transfer case it’s going to be right here. The 44 centerline is right here. The 60 centerline is this much longer.” The easiest solution is we are going with an aftermarket JE Reel driveshaft and we are going to have them subtract the distance from the Dana 60 pinion out of their standard driveshaft kit for a Jeep Rubicon. We will get a 1350 driveshaft that will bolt into our Currie 60 that we’ve already got, and we will get the yoke and the parts that will make it a 1350 on the Jeep end of the driveshaft also.

Charlene: There’s so much to it. Fabrication is as much math and angles as it is anything else. You did really good in high school in Geometry right? (Laugh)

Matt: Oh no! But it all has to do with what will work, what you need, and what will fit. I’m working on a job now where only certain parts were available that had about 20-degrees of angle where we needed 26. It was like an hour and a half of grinding with a carbide bit and a sander to make the yokes actually clear.