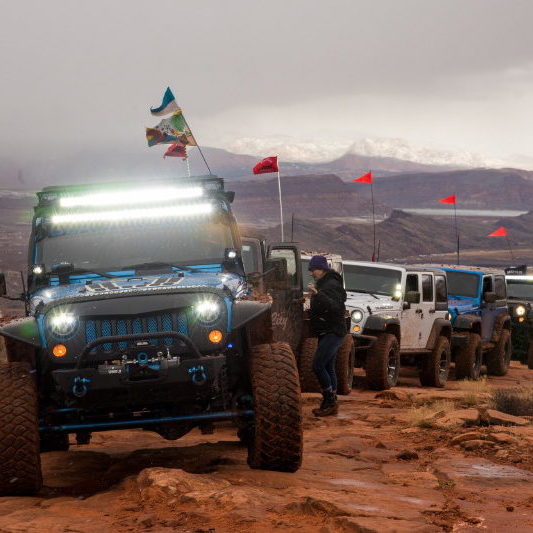 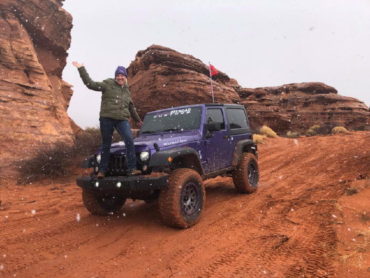 The morning started with rain. In fact, it had been raining throughout the night. I got to the Winter 4x4 Jamboree trail staging line at 7:00am and within minutes my trail assistant was there with me. We didn’t have long before the other ladies started to line up behind us.

The vehicles included: 15 Jeep Wranglers, 1 Jeep Liberty, 1 Buggy and 1 Toyota FJ. The age of the ladies ranged from the early 20s to 58 years old! Their skill levels ranged from one woman who was driving for the first time to one having almost 50 years of experience 4x4ing.

At 8:00am, all the trail lines took off in consecutive order. We were in line 17 of 28 lines. We took off from the Washington County Fairgrounds, which is between the cities of Saint George and Hurricane in Utah. We drove for approximately 10 miles on the Highway to Long Valley Canyon, where we aired down our tires. By this time the wind had really picked up along with the rain. 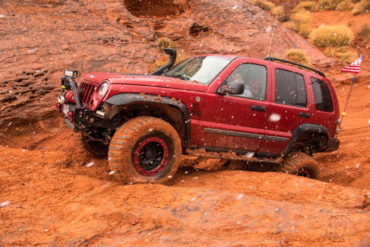 Ahead of us was another group of about 25 Jeeps that had decided to turn around and go up the mountain thru the sand dunes, which would be the end of our trail. Their reason was that it was too muddy, slippery and possibly dangerous. We had our drivers meeting and it was decided, by all the ladies, to give it a try.

We proceeded with caution. Immediately our Jeeps were going through mud holes of all sizes.  At first we were driving very slowly, as to not totally cover our Jeeps in mud, but after a couple of minutes we gave that up and really started having fun. We were slipping and sliding and even drifting. Over the CB all the girls could be heard giggling, laughing and whooping about how fun this was and joking about the other group missing out on all this fun.  We ended up playing in the muddy canyon for about 30 minutes. 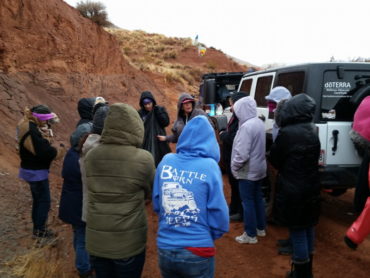 I then found an area that was semi blocked from the wind, and the rain had let up to a light mist. I stopped the group and gathered all the ladies near my Jeep. I handed all the ladies a goody bag filled with swag and each lady received a necklace from Artec Industries and t-shirts and hats from Adams Driveshaft & Offroad, Sin City Offroad, Empire Jeep, Underground Diesels, Teraflex, Dixie 4 Wheel Drive, Genright Offroad, Scorpion Motorsports and TRE (Tactical Recovery Equipment). Needless to say the ladies were super excited and overwhelmed with all the goodies. But the day had only just started.

We headed up the mountain and to our first obstacle. The trail was originally rated at a 4 out of 10, but with the weather it was increased to about a 5 or 6.  At the end of the obstacle is a double ledge that you need to climb. To the left is the easiest route, it gets harder the further over to the right. I got out and spotted the girls that needed it. There was one lady that had never been in the dirt of even used 4 wheel drive and several others were very new to off-roading. The CB was used continuously for instructions and also Q & A’s. Jessica got to the newbie and even opened the driver’s door to explain how to put 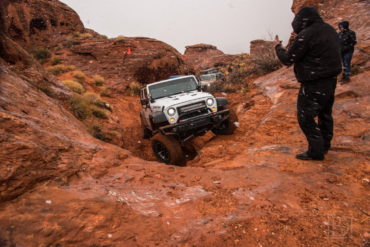 it into 4 low and lockers on.  She then walked next to her jeep to the obstacle and then told her to watch and listen to my instructions.  After all the girls were over, there were high fives and hugs all around. They were pumped and ready for more (and soaking wet, but that seemed to encourage them more).

We continued higher up the mountain and over a few more obstacles. The rain had turned into snow, which had the ladies opening their windows and with their heads and tongues out they had snow landing on their tongues. At this point we had 2 different professional photographers find, and follow us, to take some awesome photos that the ladies got later at the vendor show.

We again pulled over to the side of the trail, as once again another oncoming group had decided that the snow, wind and rain made it too much for them to want to continue.  We all just scratched our heads, giggled and continued on. Not one of the ladies wanted to back out. We stopped again for another raffle of more hats, sweatshirts, and hoodies. 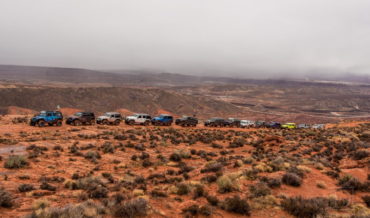 The trail followed the edge of the mountain around to an area called the playground, where several trails meet and then play just about everywhere. This whole area to play in is rated from about a 3 to 10. We continued to the sand dunes but had to take a quick stop at the bathroom (this bathroom was installed by the Desert Roads & Trails Society with a government grant). It was a welcome relief for all and for the group that was just leaving as we arrived and another group came in as we headed out.

The rest of this trail ride was thru the sand dunes where the ladies played like kids by sliding and drifting thru the dunes. The dunes were soaked which would suck your jeep in only to have you back out. We had to recover one Jeep; she drifted a little too far to the left and started to slide off a dune. We quickly had a strap on her Jeep and pulled her back onto the dune. Many of the ladies got involved in the recovery learning how to use the strap and how to correctly pull the Jeep without any damage. 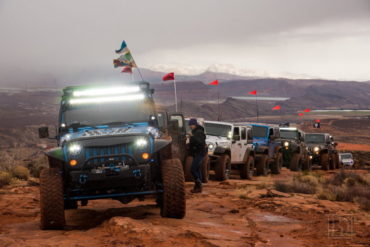 We made our way to an oasis in the dunes where there is a single tree in the middle of a large dune. We had our slightly late lunch stop here, and our final and biggest free raffles. They were the grand prizes which included:  2 sets of Alpine speakers from Jeeples.com, one large security box from StrikeForceZebra, one gift certificate (buy 2 get 2 free of your choice) from Raceline Wheels, 2 $75 and one $100 certificates to 4 Wheel Parts, a front bumper accessory to convert a stock bumper to hold a high lift jack or light bar and 2 D-Ring attachments by WilcoOffroad and last but not least 2 t-shirts and 2 hats autographed by the TV stars of the show called TANKED which is on the Animal Planet (they build huge fish aquariums).

From there we headed down to the tunnel into Sand Hollow State Park.  We aired up, helped a few reconnect their sway bars and ended our trail with it still raining. 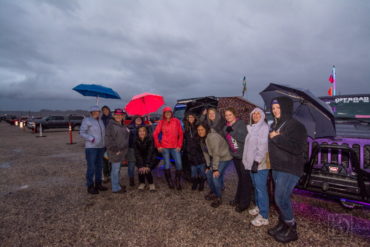 We had several men on the trail inside of the jeeps.  I was approached by 3 of them while airing up to tell me what a great day it was for their other halves.  One said that his wife asked him a couple of times how to do something and he said he told her to ask me on the CB and when they got to the obstacle he told her he wasn’t there to help and to watch and listen to the spotter.  He hugged me and said that she had never wanted to be the driver and now she told him that she wants to do it much more often.  I can’t remember feeling so proud.

I want to give a huge Thank You to all the sponsors that donated such an amazing amount of swag, gifts and awesome prizes for these ladies. I also much give a huge shout out of thanks to my assistant Jessica Close for all of her help on this fantastic day.

I hope to see many more ladies getting in the driver’s seat and having fun and staying safe out there. I’ll see you on the next trail.