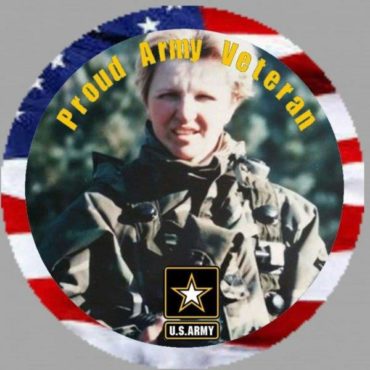 My story begins in 2002 with a swanky little black Jeep Liberty. At that point in my life, it was just a vehicle to get me from point A to point B.  I had not yet fallen in love with Jeeps and off-roading.  Fast forward several years later to 2009 and I met my wife, Tonya. She had a 2009 Jeep Grand Cherokee, which at that time was her 9th Jeep. 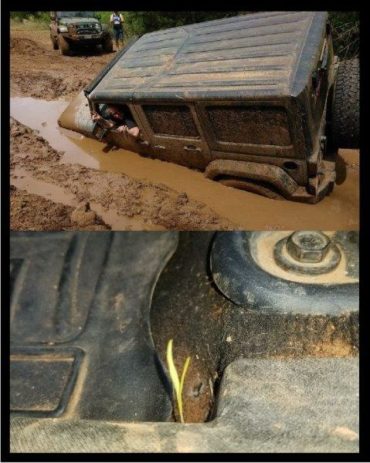 In 2014, we bought a 2006, 65th Anniversary edition, 2-door Wrangler that was Army green, which was fitting because my wife is a 100% disabled Army veteran. We called it the “Green Monster,” but besides a puck-lift and some 33’s, it had no pizazz.   It wasn’t until we traded in the Monster one day on a complete whim, after eating Mexican and supposedly going thrift store shopping, that we got our first real off-road worthy Jeep. Our thrift store shopping turned into buying a 2013 Silver JKU that there was nothing thrifty about. We named her Pistol Annie.  After we purchased Pistol Annie or “Annie” as we called her for short, our youngest, who was 8 at the time, told us we needed to join Red Dirt Jeeps here in Oklahoma. He said, “My Daddy is part of Red Dirt Jeeps and you should join too!”   This was March of 2017. We started going to events and meet & greets all of which ended up introducing us to a tribe of "Jeeples" and people we now call “framily”.  Yep, these folks have become friends who are family and have become our “ride or die” kind of family. 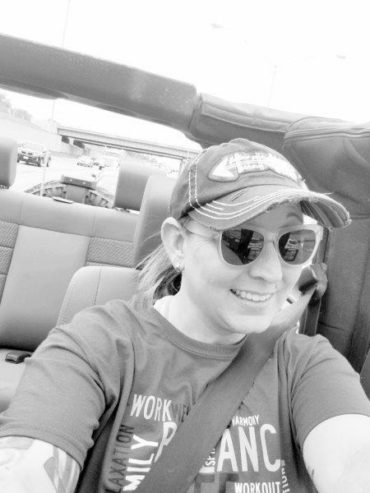 That first year with Annie, I absolutely fell in love with Jeeps and off-roading, especially the first time I crawled when we went to a Red Dirt Jeeps sponsored charity event called Crawl for Cancer in Davis, Oklahoma @ Crossbar Ranch.  This was my first “real” off-road adventure.  Until then I had only played on backroads and friend’s pastures.  I had never been rock crawling and I simply showed up at Crossbar to camp for the weekend, and to raise money for children’s cancer, and hang with my framily.  That first night, our group of friends decided to go night wheeling and can I just say WOW!  It completely stole my heart. That’s right, I did my first ever rock crawl at night, which I did not realize was so amazing until the next day when we did the same course during the day. Night crawling for my first crawling adventure hadn’t even made me think about all the cliffs and turns I now saw in the daylight; all I knew was I had just followed what my spotter told me to do. When I saw those trails in the day light, I was super impressed with myself. I probably never would have attempted them at night if I had known what they were really like. 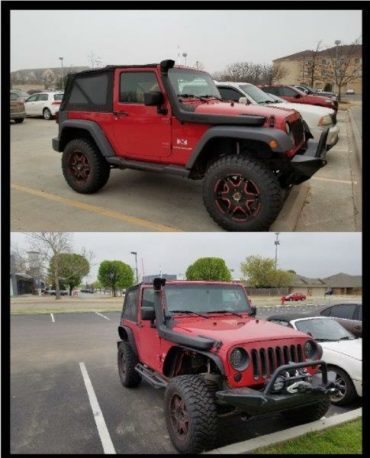 I met everlasting friends that weekend at Crossbar along with picking up tips, tricks and educational moments that will only help me progress into my off- road success. That weekend, my driver side brake line broke out on the trail. In true framily fashion, my Jeep peeps came to my rescue to help patch up Annie and get us back on the trail. They showed me how to pinch off the brake line with vice grips and zip ties. Man, who would have ever thought zip ties would be a girl’s best friend!  I managed to continue for another couple hours safely until we could get back to the camp.  That excitement, comaradery, and adventure that first weekend is what made me happy and fall more in love with the art of off-roading. And rocks fueled that fire inside of me. 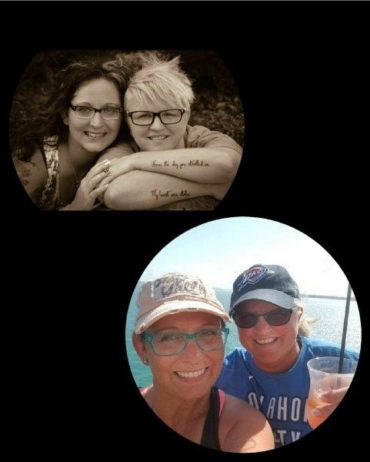 From that moment on, I yearned for crawling and to learn more about my Jeep.  But I had heard the phrase “mall crawler” so much at this point, I never wanted to be called that or accuse someone else of being one either.  I started learning how my Jeep works, what makes it function, what part does what, and what my rig sounds like.  I know that might sound funny, but once a Jeep becomes yours, you know exactly when “Houston, there’s a problem.”  Now, I can start trouble shooting my Jeep from the moment I think a problem is going on and it feels so empowering. 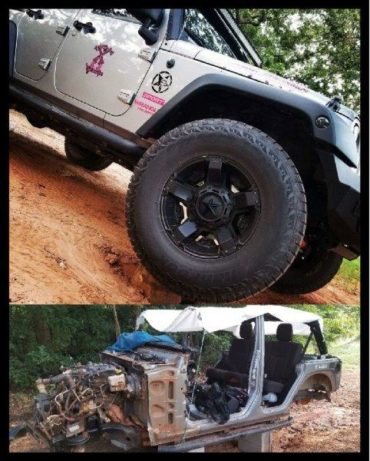 Unfortunately, in 2018, Annie was involved in an accident and my precious off-roader was totaled.  I have never been so attached to an automobile in my life; it was heart breaking as we saw them load her up on the wrecker never to see her again. It was like I had lost a family member.  Sounds crazy, doesn’t it? 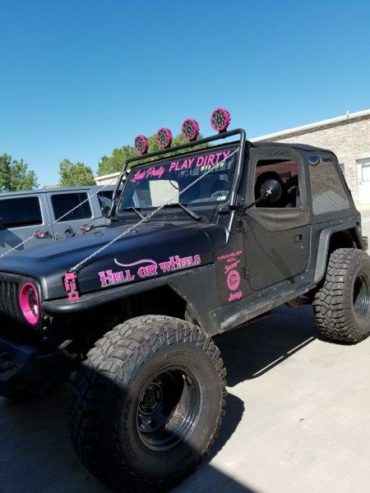 After mourning Annie, we decided to go back old school and bought a 2000 TJ that we named “Hell on wHeels.”  Let me tell you, she surely was nothing but hell.  Problem after problem until finally, after throwing a large sum of money into her, we ended up selling her in February 2019. 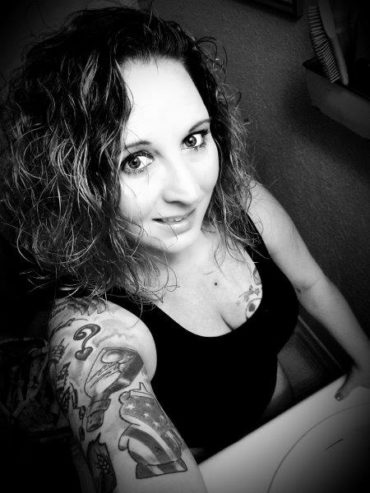 That same day in February, I bought my first very own Jeep, a red 2-door, 2008 Wrangler X. Until now, all my Jeeps had been shared by my wife, who is now up to number 14.  I thought I wanted to name my Jeep Fawkes, because I am an avid Harry Potter fan.  I sat with that, even told many people what her name was, and started creating my theme for the graphics designer.  But that all changed just a few weeks ago when I went to a fundraiser for Veteran Suicide Awareness.  After the impact that event had on me, I decided to make my Jeep a tribute Jeep and named her PTSD/MST≠22.  This Jeep is a tribute to my wife who is a 100% disabled veteran with PTSD and MST and all the other veterans who struggle with these illnesses.  My wife is a huge inspiration to me because she has fought and fought to overcome so many obstacles in regard to her mental health.  I have seen her attempt suicide 4 times in 3 days and survive. I have a Marine friend, who was hit with an IED during Operation Iraqi Freedom/Operation Afghani Freedom who is a survivor. I have many other friends who continue to try to survive as a result of their illnesses and that is why PTSD/MST≠22 is dedicated to those who have been affected by military service-connected PTSD and service-connected military sexual trauma.  My dream is to have my Jeep be a visual, rolling, crawling tribute to my wife, to those who have not been as fortunate as her to have someone fight for them, to the ones that go unnoticed, the ones yet to come, and to the ones that paid the ultimate price.
I have big dreams with my Jeep and off-roading.  I would love to put together a benefit where we can raise money to help fight Veteran Suicide. I want to collect signatures of Veterans, Active Duty Military and Families that have been affected by PTSD and Military Sexual Trauma and have my hood wrapped to display those signatures as a sign of hope, encouragement, and awareness.
Currently my Jeep is nothing fancy, she sits on a 2.5” Rough Country lift, 33” tires, custom stinger bumper, with a Smittybilt X20 10k wireless winch with synthetic rope, and Smittybilt rock rails.  The rest of her is fairly stock at the moment.  I am learning how to make her mechanically sound before she starts trying on all the fancy fixins’.  I have managed to change out my own spark plugs and wires, install my winch & rock rails, changed out the Y-pipe for my exhaust and catalytic converter with the help of some very good friends.
For now, I am learning how my Jeep works and sounds, the exterior flashiness will come with time. I have built so many Jeeps in my mind, BIG huge crawlers sitting on tons, and 42’s kind of Jeeps, ones that I can only dream of, but like people with PTSD and MST, we have to learn about the insides and what makes a person tick. We have to make them feel whole and beautiful and then, the exterior can match and start falling into place.  Until 22=0, I will keep fighting for those who cannot fight for themselves and I want my Jeep and my off-road life to represent that. 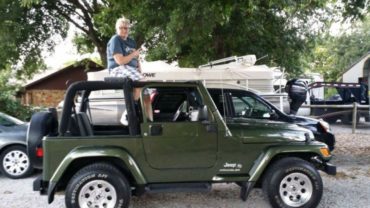 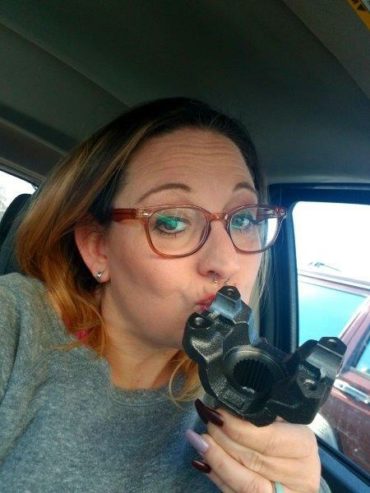