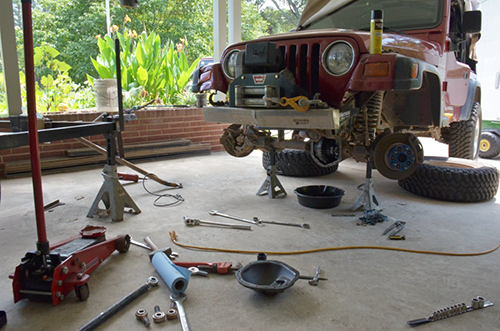 Toyota owners talk a lot of smack. They tell stories about how their 22R-whatever ran for 100,000 miles with nothing but a couple quarts of used ATF and some Lucas in the pan, up until the day the head gasket blew and warped the head. They’ll brag about how a welded Toyota 8” rear will handle years of abuse from 38” Thornbirds, except for the time a shaft broke in the Bojangles drive-thru. But most tellingly, they think nothing of leaning the cab of their new Tacoma into a tree because “we’ll have to cut the top off sooner or later.” And that’s the root of it. As much as they brag about sitting in the air conditioning on a hot July afternoon, deep down, they know that riding around in a tin box was the wrong choice. 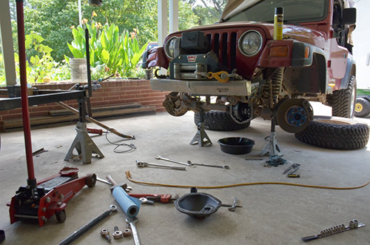 That’s really where this tale starts. We have two Jeeps. I drive one of them to work almost every day. Driving with the top down exposes you to your surroundings in a way that rolling down a window can’t. If the road drops down into a valley and crosses a creek, you might get cold. If the road leads you into a field on a sunny day, you get hot. When a pedestrian on the street corner sneezes, sometimes you think it came from inside the vehicle. It’s even great in the rain.

However, when we go on “wheeling” trips, we load our Jeeps up on trailers. We sit in tin boxes on the interstate wishing the traffic away so that the fun part of the trip can start. That isn’t how it used to be. Years ago, Cydney (Cyd) and I crisscrossed the country in an old Bronco, wheeling and camping along the way. It was past time for us to get back to our roots.

The plan was simple: ten days, nine nights. Drive from Raleigh to Asheville and back. Don’t drive more than 100 miles a day. Don’t leave North Carolina. Don’t drive on the highway. Camp every night. Dirt every day. 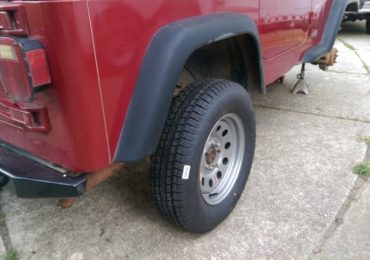 The first order of business was to get our junk in order. My Jeep needed new joints on the tie rod and drag link. Four matching ¾” rod ends from Barnes 4wd solved that problem in a hurry. A late-night SYE install from several years ago never sealed properly, so I spent a few hours redoing my own bad work there.

Cyd’s Jeep came with a nice set of BFG KO tires, but they were a little small. The spare didn’t match and was dry-rotten. Rather than buying a matching spare for a set of tires we didn’t really want anyway, we made a quick call to the fine folks at Discount Tire in Raleigh. The next morning, we had five new 33” BFGoodrich KO2 all-terrains mounted, balanced, and ready to go. 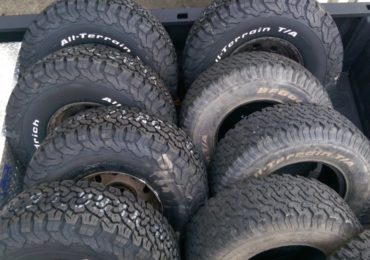 Cyd’s Jeep would be tasked with hauling around all our gear, so it got a brake controller and full seven-pin trailer wiring out to the back bumper. The exhaust has been a problem on this one ever since we bought it. I spent an hour or so shifting the tailpipe and muffler around so that they wouldn’t hit the gas tank anymore. The fix would only last for three days.
It’s been a few years since we’ve camped in a tent. We’ve car camped, we’ve done a lot of backpacking, but since the kids came along, our camping experience has been limited to sleeping in the camper at far-flung destinations. A lot can change in a few years, so we searched the Internet for the latest innovations in “roughing it”. We were shocked to find that camping on the ground in a tent is totally passé. There are critters down there. Daddy longlegs can crawl in through a half-opened zipper. Bears and lions might come inside for a snack. 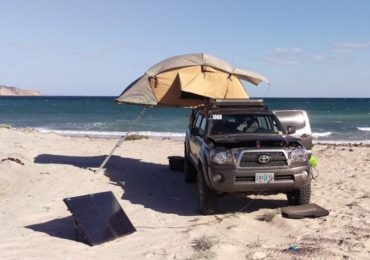 Enter the rooftop tent. Today, you can sleep in a deluxe polyester house in the sky, climb ladders with sleeping children in arm, and hope to hell those same kids don’t wake before morning or else you’ll be gingerly descending that ladder for midnight potty breaks. But never mind the shortcomings, remember the lions.

As it turns out, rooftop tents are expensive. The biggest among them (claiming to house more than four people) are barely larger than a king mattress. We’ve slept in a king bed with three kids, and let me tell you – Mama and Daddy aren’t getting much sleep for all the wrong reasons. “Buy two tents,” you say? We spent less than that to buy one of the Jeeps and actually, for each of the three kids. Sadly, we did not join the rooftop tent crowd. Instead, we splurged on an enormous, new, old-fashioned, on-the-ground tent from Big Agnes. We loved our old Big Agnes backpacking tent, and the new “Flying Diamond” tent looks to be pretty bomb-proof. Given the choice between the six-man and the eight-man versions, we opted to spend a few extra bucks for the big one. If nothing else, it means the adults can both stand up inside. 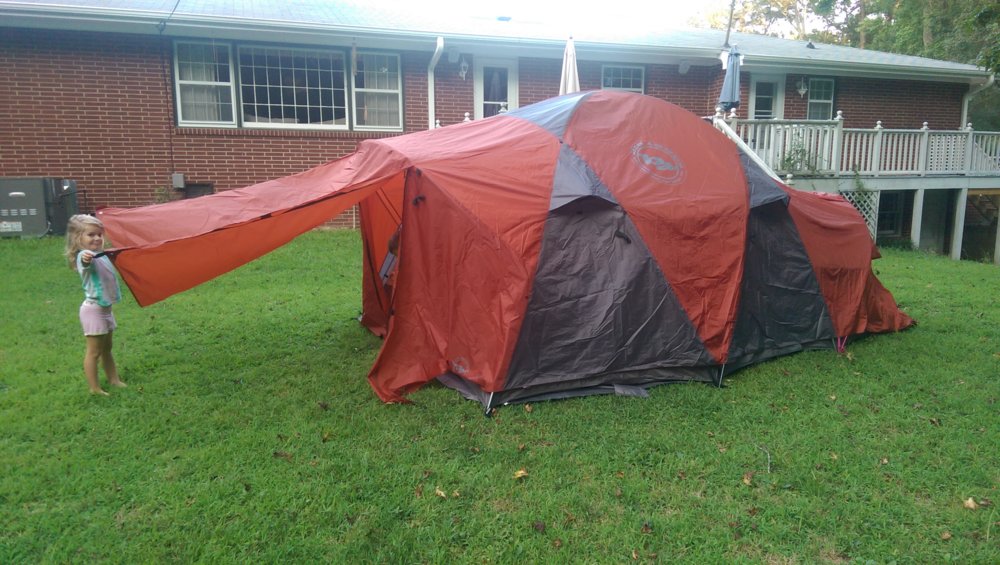 The tent showed up a few days later, and the sweltering afternoon heat couldn’t dissuade us from a test run. To say the tent is a monster is an understatement. The main room is 12’x12’. There’s a back bedroom that easily fits a queen inflatable mattress, and a front vestibule under the rain fly that’s nearly as large. Cyd took to calling it “Tent Mahal”. 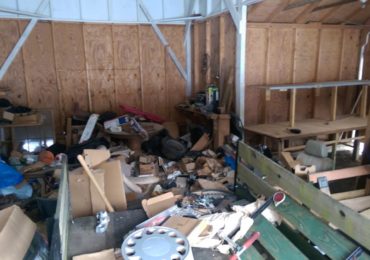 The only remaining piece of the puzzle: where are we going to put all our stuff? As it turns out, we found a little utility trailer in the barn when we bought our new house. Surely, we could clean that thing up, maybe replace the deck, and have a solid little trailer that could haul a couple of coolers and some groceries. 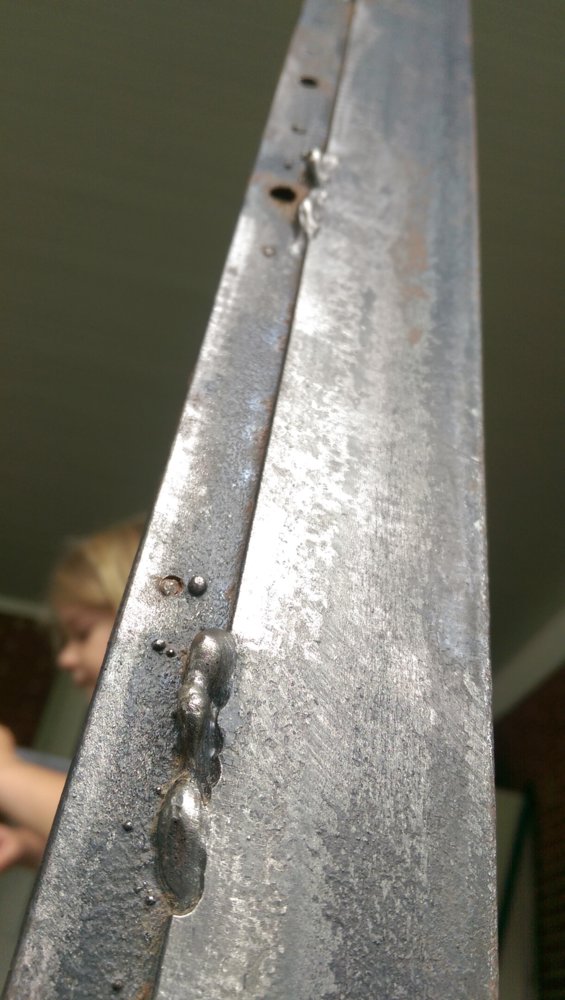 The first order of business was to pull the trailer up to the house and give it a good once-over. At first glance, both tires were shot and there wasn’t a spare. At second glance, the axle had a 5 on 4.75” bolt pattern, and was almost definitely a re-tubed car rear end. The frame looked like it had been welded together by two different people—the guy on the passenger side once read a book about welding, and the guy on the driver’s side heard about the book that the other guy read. The deck was a rotten piece of plywood. The wiring was shot. There was only one safety chain, and it had held up a chandelier in a previous life.

So, I started cutting off anything that looked questionable. When it was done, all that was left was a 5’x8’ rectangle of steel angle, four corner uprights, and the tongue. We ordered three tires and wheels, new fenders, three sticks of steel, and a jack for the tongue. Since the Jeeps would be pulling the trailer, we sprung for a 3,500lb axle with brakes. Now, we just had to put it back together.

This story was first published here.