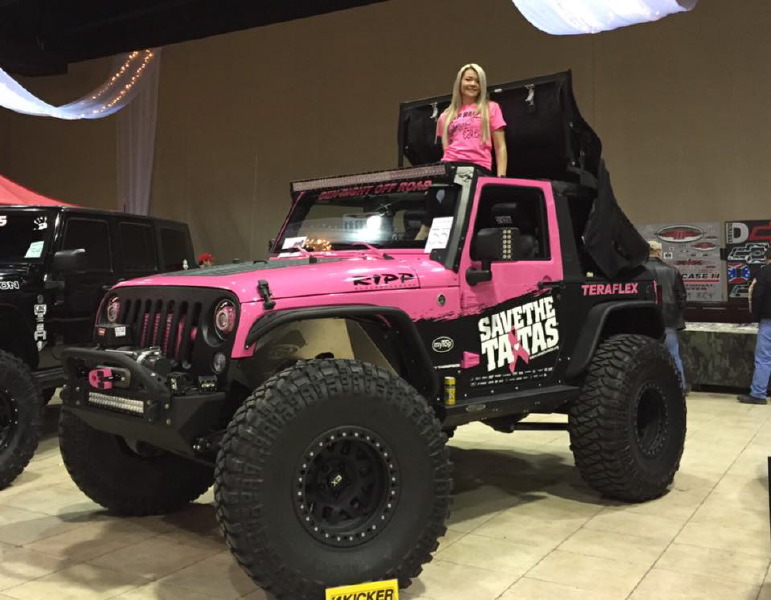 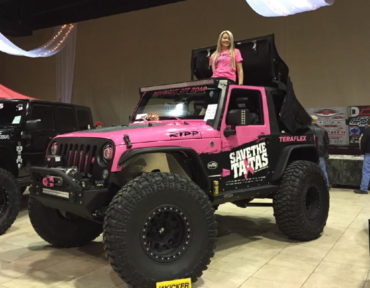 Three years ago, I started out in my first car, and Ohio had proven to me that I needed a bigger vehicle. In addition to winter fast approaching, I had the unfortunate luck of hitting two deer in the same week with my car. While the car was in the shop I spent hours reading reviews of bigger vehicles to try to convince my grandpa to let me get one. After countless vehicles that I named, there was only one that we agreed on – a Jeep. The next day we went to look at Jeeps at the local dealership. I quickly decided on a black two-door Sahara. I chose the two-door because I had seen a lot of four-doors on the road and was looking to be different from the rest.

The next couple months were spent planning future Jeep ideas with my grandpa. He was the only one who supported my newfound Jeep love; plus, he was just as excited as me. I started out by spray painting the front Sahara piece, rear Sahara piece, and some interior pieces hot pink in my garage. My Dad was furious, and from then on referred to my Jeep as “the clown car”. There were also a lot of other people who made fun of me for doing it, which didn’t faze me because at the end of the day my grandpa and I loved it. A few months after that, we decided to have my entire Jeep painted pink. I always dreamed of having a pink vehicle, and the thought of standing out from everyone else was a big factor as well.

I spent the next few months traveling to local Jeep events, which was when I began to realize that I was meant to be in the Jeep world. After every event, I would stop over at my grandpa’s house to give him my registration papers from the event, dash plaques, and anything else that I had received. Although I had not won anything with my stock Jeep, I didn’t care nor did my grandpa because that’s not what it was all about! He would take whatever I gave him and save them in a binder that he kept. Most of the events that I went to were close to home, but I wanted to go further. I had heard about Jeep Beach in Daytona, Florida many times from Facebook, Instagram, and tons of local Jeep people, so I knew I had to go! Little did I know that Jeep Beach was going to be the event that changed my life.

It was finally time to head to Jeep Beach! I washed, clay barred, and waxed the Jeep, packed my bags, and hit the road with two of my friends! We drove all night nonstop so that we could make it there as soon as possible. Since I was only eighteen at the time we were very limited as to what hotels we could book and check into without an adult over twenty-one, but we finally found one! When we arrived at the hotel, it was in a bad part of town, and I was too nervous to stay there for the entire week. I searched for a new one and luckily ended up finding one last minute by the speedway. Thank God, they had two more rooms open! Anybody who has been to Jeep Beach knows how hard it is to find an open room last minute. Conveniently, we got a room on the ground level that had a sliding door leading directly to the parking lot. I had a few decals to put on my Jeep before we headed to the show. I was having a tough time lining them up straight and needed someone’s help. I noticed these two guys in the room next to me who seemed nice, so I got their attention and asked them to help me. At the time, I didn’t realize that it was Chris Roca and Keith Fisher from RIPP Superchargers. Before I knew it, their other friend pulled into the parking lot and jumped out of his Jeep to help me out, too. This was Greg Henderson from Unofficial Use Only.

After the decal situation was figured out, I ended up spending the next hour talking to Greg and telling him my future plans and goals. I told him of my “crazy” dreams of wanting to make it to SEMA one day (never did I think in a million years that I would have my own Jeep in there), and travel around the country to Jeep events. I commend Greg for hearing me out and being supportive unlike all the other people I had told my future goals to. Most people thought I was just crazy and would tell me that it was “impossible”. Greg was one of the first people in the off-road industry to give me the time of day, and I cannot thank him enough for that. If it weren’t for Greg listening to me in the parking lot of that hotel, I would not be where I am today.

The next day at Jeep Beach, I ran into Greg at The Daytona Speedway where the main event is held. He told me that Nic Ashby from Rockstar Performance Garage wanted me to go talk to him the next day about possibly bringing me onto the team as an ambassador for Rockstar Garage. That moment was the best moment of my life thus far. The following morning, I got ready and rushed back to The Speedway so that I could officially meet Nic and see if it was true. IT WAS! For anyone who follows Rockstar Garage they know all their builds are top notch and do not fall short of perfection in any aspect. Nic mentioned that he wanted to build my Jeep as a breast cancer awareness build, which I was also immensely excited about! I also cannot thank Nic enough for the opportunity he has given me.

I drove back to Ohio to talk the future Jeep plans over with Grandpa. He was hesitant because he thought it was probably too good to be true. However, after some talking and showing him some of Nic’s previous builds, he was just as excited as me and was fully supportive of the idea. Before I knew it, I was driving my Jeep out to California to drop it off to Nic. I was sad to leave my Jeep in California until I realized that I was going to be seeing the final product of the transformation a few months later at the SEMA Show 2016 in Las Vegas.

While waiting for the Jeep to be finished, my Grandpa and I lived off the few “sneak peeks” that Nic sent us. During the waiting time, my Grandpa got sick and had to be taken into the hospital. After a few weeks, he was transferred into the nursing home due to his declining health. We knew that at age ninety-three his time was limited. I prayed he would be able to see the Jeep after it was finished. Due to his health growing worse, I knew what was coming. I received the phone call a few days later that my grandpa had passed away. I always wish I could have seen his reaction when he saw the finished Jeep in person. The Jeep wasn’t just my passion, dream, and love - it was ours.

November quickly came around and it was time to fly out to Vegas and be reunited with my Jeep and spend the week at SEMA in the MyTop booth! When I got to the convention center and walked through the never-ending hallways of unbelievable builds, I couldn’t believe I was getting closer and closer to my Jeep. I saw it for the first time since the transformation, and I knew it was mine because it was the most beautiful one there. Tears streamed down my face as I walked around my Jeep in disbelief. Nic did such an amazing job. I am beyond blessed to be working with such a talented group of people. My first trip to SEMA was an amazing experience that I will never forget. I can’t wait for SEMA 2017!

Fast forward to now, I am still a full-time college student majoring in marketing at Kent State. In my spare time, I travel around the country with my Jeep to different events living my dream. I hope that my Jeep and I can be an inspiration to other girls who are looking to get into the same industry! When I started out in the Jeep world, I tried reaching out to other girls to get advice, but no one was willing to give me any. One day, I hope ladies will come to me because I would love to help or give advice to anyone who needs it. This is only the beginning of my journey in the Jeep industry! If you want to keep up with me, you can find me on Facebook or Instagram: @ThatPinkJeepGirl.

Thank you to Nic Ashby from Rockstar Performance Garage, Greg Henderson from Unofficial Use Only, and all the other partnering companies for making my dreams come true and continually supporting me!