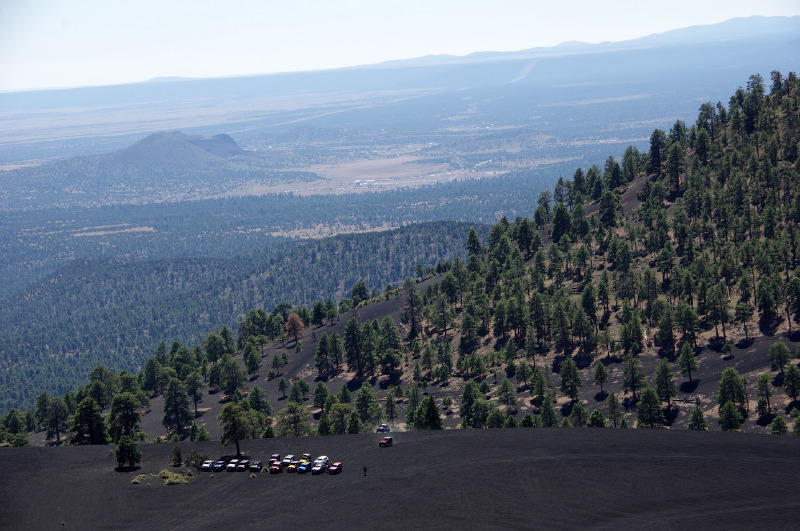 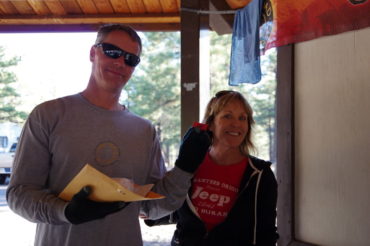 Last weekend was my 4x4 club Offroad Passport's 7th Annual Cinders Event held at Cinder Hills OHVA near Flagstaff, AZ. Every year, we rent the large rotunda at O'Leary Group Campground where our group camps, and we hold our Member Appreciation Month drawings, raffles, a salsa contest, BBQ, a campfire, and goof around in general. The trail ride to the Cinders OHV is on Saturday with lunch at the top of a double-cone volcano! It's our big fund-raiser, and it keeps getting better every year!

People began arriving Friday afternoon. My husband, George, and I drove up in our truck and small trailer packed to the gills with food, firewood, prizes, and stuff. The Cinders is all about relaxing and having a good time, so we sleep in our camper shell – we make the bed Friday night and leave it all weekend. 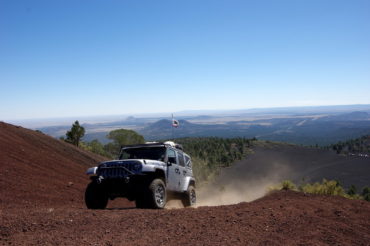 While we were unpacking, Lisa from Ojai, CA arrived. She and I were both part of the 91 entrants for the Ladies Co-Driver Challenge. We hugged each other like long lost friends; it was so awesome to finally meet in person! Getting to know each other via social media, she came across my event and grabbed the opportunity. She has a goal to go wheeling in every state of the lower 48, so here was a chance to wheel in Arizona! I was honored she drove all the way out here to spend the weekend with us!

By Saturday morning the campground was full of Jeeps of every description, lined up and ready to go wheeling. This year's trail ride crossed the southern part of the OHV area with spectacular views back at I-40 and Flagstaff. After crossing the dry lake and checking out the figure-8 track, we drove all the way to the top where you can see out across the painted desert while driving along the edge of the double crater. Driving into a volcano is by far one of the most amazing experiences you can have. I had forgotten what an incredible feeling it is when it's your first time, that is until I saw Lisa's video blog from inside the volcano cone! 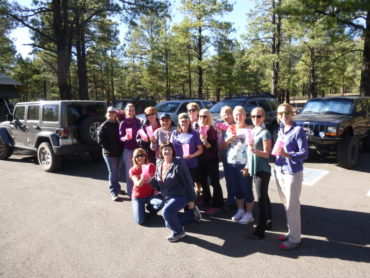 Some people hung out at the campground instead of wheeling, and they discovered a hiking trail nearby that runs alongside a lava-flow near the base of Sunset Crater. Between the panoramic views on top and the desolate and stark beauty of the cinder hills themselves, photographic opportunities abound at this place! One guy showed up Saturday afternoon and asked if he could set up his brand new Conquerer trailer for the very first time. He had found out about the Cinders Event on Facebook and thought it was a great opportunity to practice setting it up. When everyone was back in camp, we gathered all the ladies together so I could invite them to become members of Ladies Offroad Network, and we took a group photo to share with the Facebook group! 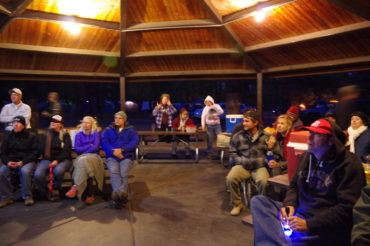 Saturday evening’s fun started with the salsa contest, which involves eating and voting for the best salsa! Winners get an Offroad Passport t-shirt. With the built in BBQ grill going, there was a lot of cooking, eating, drinking, talking, and laughing going on. Amidst the banter, we drew the winners of the Member Appreciation Month prizes – members who upgrade to premium club or renew their membership during the month of August are eligible for several great prizes. Then, we held the popular Offroad Passport fun raffle which, over the years, has earned a reputation of being a lot of laughs.

The Cinders Event is a great way to get to know Offroad Passport, and that message must be getting through, because Lisa wasn't the only newbie to the group. There were many new faces around the campfire. Some were new acquaintances, and others were long-time members who had never been to the Cinders before. 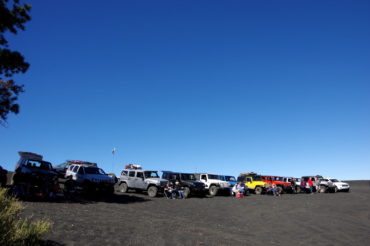 You know how sometimes life just makes you sit up and pay attention to something rather than letting you do it by rote? Well, that's the best way to describe what happened to me this year. Months prior, I was feeling disheartened when campers' and sponsors' interest seemed in decline. I work hard to get cool stuff for the Member Appreciation Month drawings and prizes for the raffle and this summer, my stress level made me wonder if it was all worth it. So, I thought maybe this would be the last Cinders Event, and I was totally on autopilot going in.

But the newbies’ reactions to the Cinders and driving into the volcano for the first time rekindled something in me. Lisa's video made me see it through her eyes, which lit a spark and made me observe the weekend from a fresh perspective. In addition, seeing dear old friends who were there for the first time discovering the camaraderie and fellowship among our members that exists every year also stirred my soul. I could see that I had actually built something here that is tangible and valuable. Suddenly, the Cinders Event wasn't the same old thing all over again, and there was no question whether my efforts were worth it.