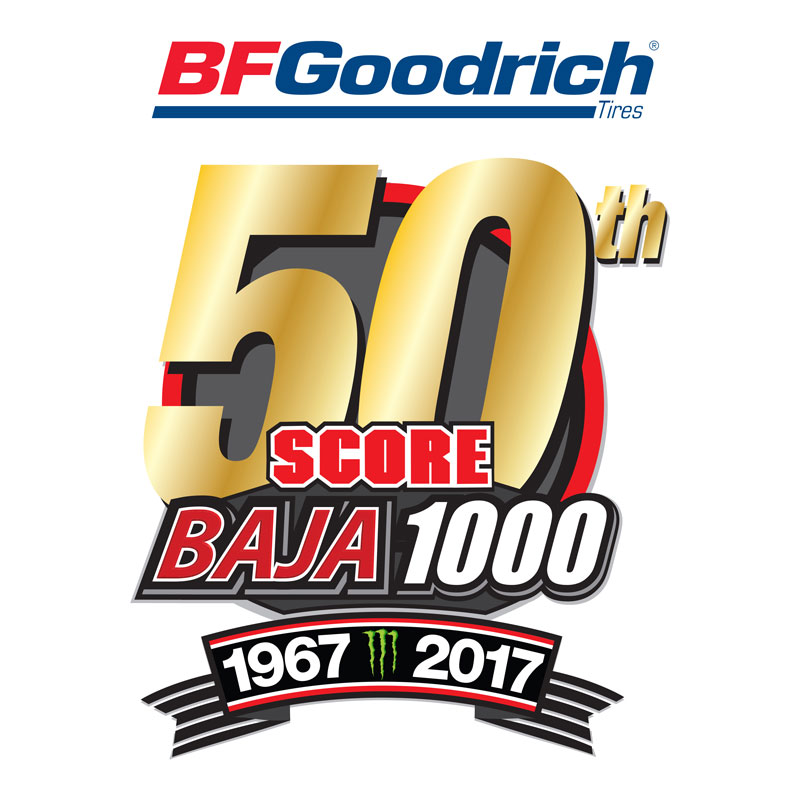 ENSENADA, Mexico—As the sands of time fly quickly by and life goes on, there are times in life to pause, take a huge breath and relive if even for a few brief shining moments highlights of what dramatic life experiences were part of last week’s history-making iconic 50th annual BFGoodrich Tires SCORE Baja 1000.

The race is annually the finale of the four-race SCORE World Desert Championship, held exclusively for the past two years in Baja California.

History will forever remember Mexico’s son/father team of Carlos ‘Apdaly’ Lopez and Juan C. Lopez, both of Tecate, as the 4-wheel, overall and SCORE Trophy Truck race champions. Guatemala’s Francisco Arredondo and his team will be eternally recalled as the overall motorcycle and Pro Moto Unlimited race ‘ganadors’ in the golden anniversary race.

There were 405 total starters and 238 official finishers (58.77 percent) racing in Pro and Sportsman classes for cars, trucks, UTVs, motorcycles and quads. Racers came from 44 U.S. States, the District of Columbia, two U.S. Territories and 27 countries in the elapsed-time race over the rugged 1,134.40-mile course. With a 48-hour time limit to become an official finisher.

Early race leaders who did not finish the memorable race like former champions B.J. Baldwin, Andy McMillin and Rob MacCachren, all retired from the race after various engine issues. Afterwards, MacCachren, who was going for his record fourth-straight overall win, summed up their feelings, saying, “Baja showed us today who was boss. But, we will all continue to plan, practice and come back to tame the beast”.

Included in the 405 official starters in the elapsed-time race were 300 cars/trucks/utvs and 105 motorcycles/quads. The total number of entries was the third-most in the 50-year history of the SCORE Baja 1000 and the second-most in the 21 years it has finished in La Paz.

It was also the most number of finishers in the storied 50-year history of the Granddaddy of all Desert Races.

HALL-MARKS ALL OVER BAJA

This year’s race commemorated the achievements of legendary desert racers like Rod Hall. Hall, who turns 80 on Nov. 22, won Stock Full in the Rod Hall Racing Hummer H1 Alpha. Hall now has a race record 25 class wins (including one overall win in 1969) and he is the only racer who has competed in all 50 SCORE Baja 1000 races.

Helping Hall, of Reno, Nev. reach another milestone in his illustrious career were his son Chad Hall, Reno, Nev., who now has 11 class wins and motorsports executive Frank DeAngelo, Greenville, S.C. and. Hall was diagnosed December of 2015 with Parkinson’s disease.

At the finish line, Hall commented, “There aren't a lot of racers in this class but it only takes two guys to have a good race. We've had a good race all day and half the night. Hopefully this is my last one and I think that every good time comes to an end. I'm going to be 80 years old and I'm worn out. I'm not quite like the Hummer that you can put new tires on and be ready to roll. It has been a good run and the best part of Baja is the people down here. It is important to me for my last race to have a win in the BFGoodrich Tires SCORE Baja 1000”.

After finishing second each of the last two years in the extreme Pro Ironman motorcycle class for solo riders, Jeff Benrud won gold by defeating a group of 19 rugged warriors who were attempting to ride the course solo. Benrud, Raeford, N.C., covered the 1,134.40-mile course in 30:37:13. Only six of the 19 starters finished the race.

Coincidently, overall and SCORE Trophy Truck winner Lopez had also finished second each of the last two years before finishing on top of the podium this year.

Benrud said at the finish line, “It was brutal. I was feeling really bad about halfway through then I ate a bunch of food and felt better. I got a good shot of adrenaline the last 80 miles with all of the Mexicans cheering me on and I knew I was in the lead. Lots of prayers to make sure I would get here. I'm kind of numb in an out-of-body experience now. This is the third year I've finished across the line first in the Ironman class but I've been penalized to second twice. The silt is tough for me. I'm short and fall down in silt and I hate silt. It is terrible. I was down seven or eight times in it.”

With a time limit of 48 total hours in the elapsed time race, six racers needed almost the entire time but made it in less than 48 hour to become official finishers of the golden BFGoodrich Tires SCORE Baja 1000.

Physically the last vehicle to cross the finish line as he was from one of the final classes to start the race, Hollenbeck reflected afterwards, “Obviously the race was long for us in Class 11 but it was a wonderful race. We had our ups and we had our downs but we kept plugging away. There were hills, silt, sand and water crossings. You name it and it had it all. We finished with all four fenders and this is the first race we've finished with all four fenders.”

The significant and ever-expanding SCORE safety initiatives were at their highest level at this year’s BFGoodrich Tires SCORE Baja 1000.

This year’s race utilized a new STELLA tracking system and there were 25 rescue vehicles and ambulances stretched along the race course provided by Cruz Roja Mexicana (Mexican Red Cross).

There were also three dedicated rescue vehicles with full complement of extrication tools, medical supplies and professional Fire-Rescue crews monitoring and advancing along with the race.

There were two medical Air Ambulances staffed with a critical care nurse and paramedic.

“Weatherman” race communications were at three locations with one fixed on Mount Diablo and two in separate airplanes following the race course for constant communications and safety for the participants.

Over 50 satellite radios/phones were utilized for direct safety communications along the course. There was full internet capability throughout the command centers and Rescue units that monitored live updates, locations, communications and any race-related emergencies.

An astonishing 405 total vehicles started the epic 2017 journey with racers from 44 U.S. States, the District of Columbia, two U.S. Territories and 27 countries officially signed up to compete.

Media staffing coverage of the 50th BFGoodrich Tires SCORE Baja 1000 was also record-setting. In total, SCORE issued a record 421 total regular media, team media and commercial media credentials. For the golden anniversary, the largest single crew was from BCII TV of Los Angeles with a crew of 34 that is producing the two-hour special to air on the El Rey Network at a date to be announced.

Much like the noted version in Hollywood, Baja California and Ensenada tourism officials unveiled the spectacular Baja 1000 Walk of Fame during last week’s pre-race festivities. Embedded spectacularly in marble and raised metal along the sidewalk in front of the Ensenada office of the Baja California Secretary of Tourism are commemorative embedded plaques honoring all of the 4-wheel and 2-wheel overall winners of the most prestigious desert race in the world.

BFGoodrich Tires is celebrating four decades as a major player in SCORE Baja racing. In addition to being the official tire of SCORE International for over four decades and was the title sponsor of this year’s race, BFGoodrich Tires has now produced the tire of choice for 29 of the overall 4-wheel vehicle winners in the SCORE Baja 1000, including 29 of the last 32 years along with a record-run of 20 straight from 1986 through 2005. In total, BFGoodrich Tires has now be the tire of choice for the overall 4-wheel vehicle winner in 87 SCORE Baja races including 31 in the SCORE Baja 500.

For more information regarding SCORE, visit the official website of the SCORE World Desert Championship at www.SCOREInternational.com.