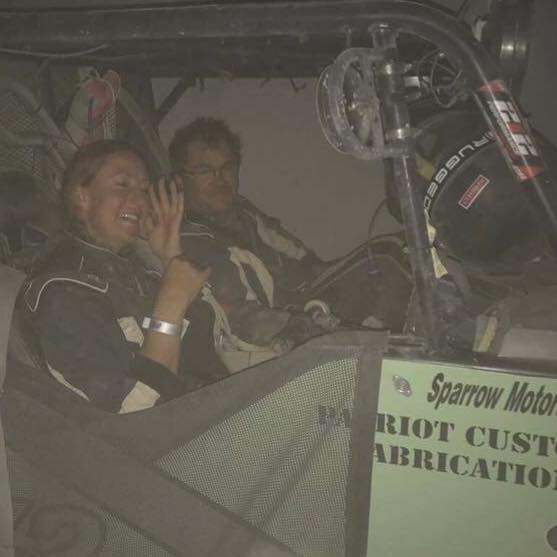 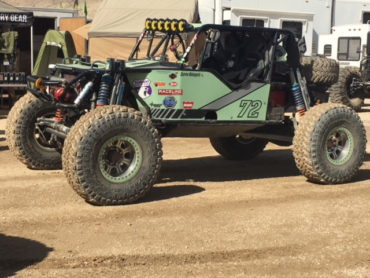 Hammertown is nothing but desert until the month of January. By the time people start arriving, it has its own address, power, and Internet. When we made it there was already a long line at the gate. We discovered several campers in our pit location. It took awhile to get that straightened out but even after that, our rental camper had still not been delivered. The company was so busy delivering campers that we ended up waiting until after 11pm. Once we got everything settled and ready for bed it was 2am.

Hammertown is officially open! We had to check in to get our packets and info for the week ahead. It was the best day to buy merchandise before things got busy. We also had to get course downloads for our class on the GPS. After getting everything figured out we went to pre-run lap 1. It was 62 miles of ruts and whoops and high speed sections. We did not like it. But pre-running is always a good time and we had fun with Dustin Isenhour and his codriver, Trevor. We couldn’t keep up with them on the high speed road sections. Our plan is to make up time in the Rocks on race day. Camp is crowded! Our entire pit crew is crammed into a 40x80 foot area, and there is not a lot of space left for things like walking or sitting. The dust gets so bad by afternoon you can’t see the end of the camper row. There are thousands of people here already with more to come! 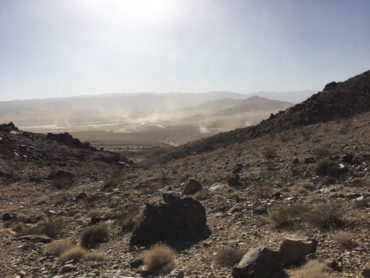 Everything tastes like dust. My neck is raw from my fire suit rubbing it in pre-running yesterday. I have several inches of open skin around my neck from the collar of my suit (race hickies). I get these normally but never this bad. Sunscreen application burns like the dickens, but coffee tastes amazing, and it is another morning waking up at The Hammers! We are going to pre-run the rock trail sections today. By 2pm we were finally ready to leave the pit after having to fix some age related issues with our older ARB. We had blown a selenoid, then the wire connection broke, and then the air compressor decided it needed to be cleaned but, thanks to ARB, we were well supplied with parts

. We took #wasabi out to the desert and made it about 2 miles before something broke. It sounded like the transfer case exploded mid stride while we were running. Fortunately, we could still limp along but no faster then 4 mph. I got out and walked next to the car to try to confirm that it was a transfer case, and I discovered that it was, in fact, the front end and not the transfer case! Good news/bad news: it’s fixable, but with a very specialized knowledge set, one that we aren’t quite that good at yet. We had the spare parts and, in a matter of minutes, found people with the ability to set gears! By 11pm we had it almost completely back together. No running, but it was good to get the breaks out of the way early!! (Heavy foreshadowing 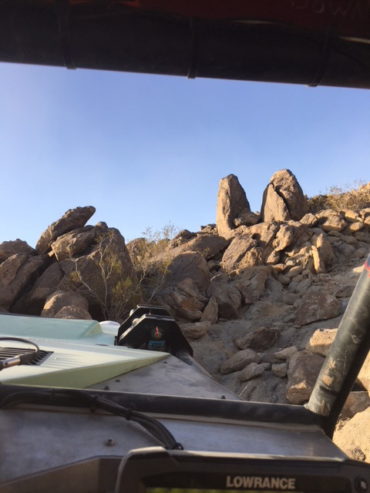 After we finished putting our ring and pinion together it was time for pre-running! We decided to run some of the rock trails that were on course. We had a blast. #wasabi makes the trails look easy, and we were able to do the whole Jack North and Fissure Mountain loop with some additional trails in less then two hours. We made it back in time for our drivers meeting at 4:30. We were beyond happy with how well #wasabi was doing in the rocks. At the drivers meeting we found out we could pre-run the qualifier and get a few laps of practice in, which was really exciting for me!

We had qualifiers at 12. My plan was to make sure we finished on our wheels this year. We practiced at 6:30 and got 3 good laps in. We did our qualifier exactly as we had practiced and put down a slow but solid 2:26. After #wasabi flashed everyone her bellypan last year, I was thrilled we didn’t need to be put right side up. A decision was made to pre-run Spooners and Outer Limits. We took our friend, Steve, in his race jeep, and Tom, in his Scout because Outer Limits brought about our demise last year, and I was apprehensive to attempt it this year. We made fantastic time down Spooners and my confidence was back (Hunter's never left). It took Steve and Tom a little bit to make it down. so we decided not to do Outer Limits. We made it back to camp around 10 that night, but it was a great practice run through the rocks!

Day 6: Thursday - The day before the race!

We are almost prepped and ready. The car is in the best shape she could be in, and our pit crew is DIALED. We have a drivers meeting but other than that, today is just waiting and trying to remain calm and focused. At the drivers meeting we were told that in the interest of having people finish, they have eliminated Spooners and Outer Limits on lap 3. Yay!! I was so relieved that we only had to survive it once! Bed time and a good dinner; tomorrow is race day. 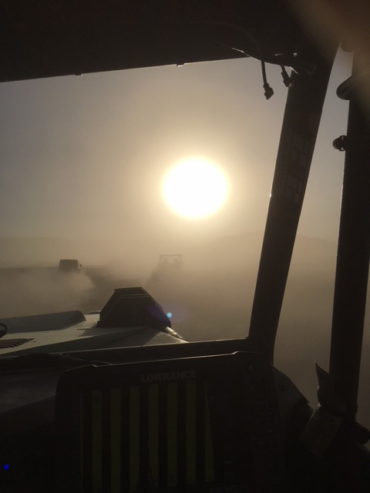 Race morning dawned cool and beautiful. Our pit crew member, Steve, took #wasabi out for a warm-up Run and got her in line at the start. We walked over just in time to get in and buckle up. We were 84th off the line and lined up next to Hells Bells, the 666 car. Our race day plan was to run a conservative first lap since the terrain was going to beat us up pretty badly.

The first 8 miles of the race course are a challenging combination of tight turns, sand, and rocks. It’s not #wasabi’s strong point because she sits down too much between the bumps, so we always lose time in the first section. This year, we were able to pass 5 or 6 cars before the rocky knolls! Though once we got out into the sandy whoops and chop, we had multiple cars pass us, including Jessi Combs in her Bomber chassis and Lucas Murphy in his Optima car. We kept moving as best we could and made it to The Notches but got caught in a traffic jam. We were behind some cars who were being patient, so we squeezed around them and found a different line and passed another 5 or 6 cars still waiting to get up the rocks. #wasabi shines in the rocks, and the minute her tires touch obstacles she can pass almost anyone. 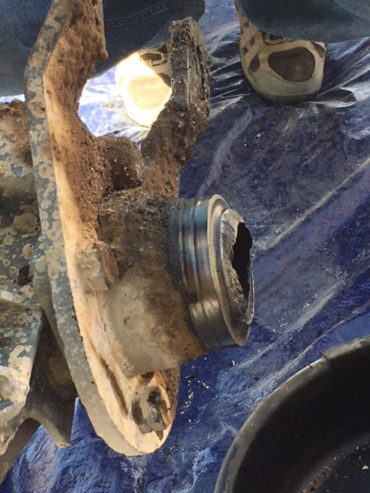 Out in the desert again, we were back in survival mode to finish the first lap. We were able to get speeds up to 50 and 60 miles an hour for quite awhile and made great time back to Resolution and Back Door. Resolution is a relatively easy trail for us, and we made it down in less than 2 minutes. But once again, we got stuck in traffic at the very top of Back Door. Two vehicles had broken down with engine problems, blocking the line we wanted to take. The race official asked to hook our winch to one and allow him to drop down Back Door with assistance so that we could then clear the trail. Our new WARN winch worked flawlessly, but as he hit bottom, his car started to pull us down off the ledge that is Back Door. We hurried to let our winch out, but we were already at the very edge and couldn’t back up to check our line again. We had no choice but to drop down where we were. It was not an ideal line, but we made it down and did a wheel stand for few seconds. When our rear end came down, we hit incredibly hard. I wasn’t sure if we hit our spare tire but figured we did since the impact was so bad. We continued up Short Bus and through the main pit out into lap 2. 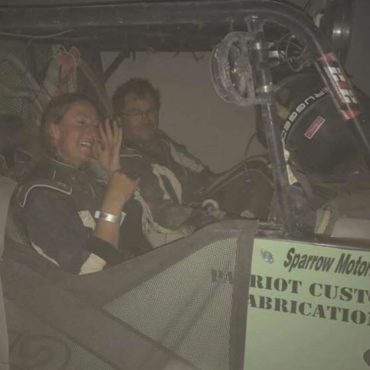 We had to do the first 8 miles again and then go out into the desert for another run to pit 2A for fuel. I was feeling like I could pass out but figured it was related to the increasing heat in the buggy and the fact that my fire suit was rubbing me raw in multiple places again. We passed Jessi Combs broken and passed another rig a few feet farther. There were so many buggys on the side of the course that we lost track of who we passed. A few hundred yards before we turned for pit 2A, we started to hear a noise from the back of the buggy that sounded like a stuck brake caliper. We pulled into our pit and requested a full vehicle shake down after fuel. At first, they couldn’t find anything, and I was so uncomfortable I had to remove my helmet. I foundthat my hair had come untied, which was causing my helmet to move around too much on my head. It had gotten caught in my HANS device and was pulling really badly. After one bottle of water, I felt really nauseous. At the same time, our pit crew was trying to figure out where the noises we heard had come from. Morgan leaned against our driver rear tire to check the brake calipers, and that’s when he noticed the tire was moving . . . He pulled on it, and it almost came completely off. The whole tire was being held on by one brake caliper bolt! At that point, we decided to get out of the car and see what was happening. I was able to put some ice compresses on my neck to cool down and began to feel better. It was at that point we found out we had ripped our rear spindle completely off. We were not only done for now, we were done until we could get an entire rear end built for the car. 6 years of hard racing had finally caught up to #wasabi and brought her to a sad, debilitating end. We would be able to weld the spindle back on, strong enough to get us back to Hammertown and into a trailer. The axle shaft would no longer go in, so we limped the few miles home with fingers crossed. #wasabi will be starting her new career as my race car after she gets her new rear end!

And as quickly as it appeared, Hammertown is demolished. All of the thousands of people, campers, and semis are trying to leave. There is no quick way out of here for anybody. If this week had a theme it would be modern day apocalypse. The wind and dust has increased exponentially. Everyone is wearing face masks. We will be heading home with lots of work to do on two buggies! King of the Hammers is always a great time with amazing people. I already want to come back!!