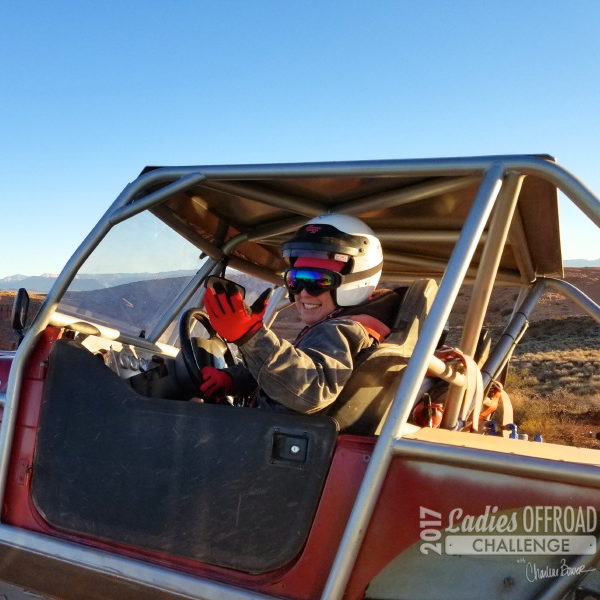 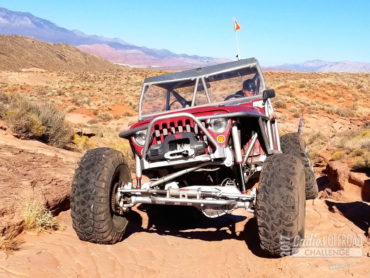 I think I was one of the first ones to be eliminated from the Challenge; however by being kicked out of the Challenge, Charlene was giving me the chance to have my own rig compete alongside hers at Fury Rode. She later asked me to consider a co-driver, my first response was that she could pick one for me. She pushed back that it was important to find the “right fit.” I asked that Charlene find a good match for me at the Top 10 Training Weekend based on what she knew about me. 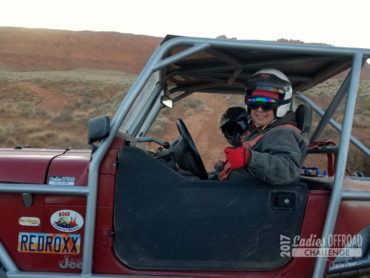 After the Top 10 Training Weekend was over, Charlene gave me two names. I reached out to Kristin first. She was very positive and excited, I knew that we would be able to get along. I think I asked her a question about pulling up her big girl pants, and she said that she was not afraid to rock crawl, that she understood the risks, and was going to give it her best. It’s funny how things can develop so quickly and I’m confident that without Kristin’s competitive spirit and skill set, we would not have won the Fury Rode event.

Having been a co-driver (navigator) in the last two Rebelle Rallies, I get that it is a team approach and that you have to trust each other and let go of what you cannot control. We were not given much information about what to expect prior to Fury Rode, so I made sure my rig was in good order and could get through the day without breaking. A week before the event, I worked on my Jeep Redroxx. I had noticed the rear brake line had developed a leak, and I addressed a few other minor issues. 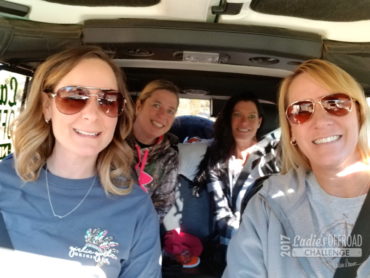 I live in Moab, Utah so am very familiar and comfortable with the terrain of Sand Hollow, especially the red rock and how my rig performs on sandstone. I loaded up my Jeep on my giant trailer (its long enough for 2 rigs) and made my way to Hurricane, about a 5-hour drive from Moab. I met Charlene at the rental house and then got the chance to meet Kristin in person for the first time, along with Jessy who would be Charlene’s co-driver.

The trip over to Zion the next day was very nice and gave us the chance to get to know each other. I think I really got to bond with the group after my “accident” at the movie theatre parking lot that night. 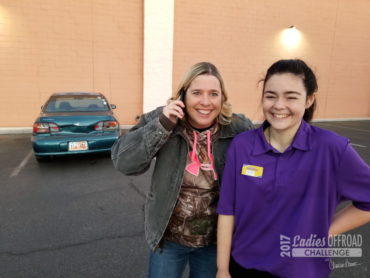 When I was looking for a place to park, I made the mistake to turning too soon and caught the back of a car with my trailer, moving it a few feet and causing some damage. I was devastated and found a safe place to park my truck/trailer and came back to “fix it”. Kristin called Charlene and told her what had happened and before I knew what had happened, Charlene had a clean-up and repair crew on-site and pretty soon we were laughing with the car owner, a girl working at the theatre (she was only 16) and her mother. Charlene had a swag bag ready and the mother was able to drive the car home after giving me a big hug. Still not sure how all of that went down but it was a team effort and I’m grateful for the support.

We got the Jeep unloaded, attended the movie, got it reloaded and after a late dinner, made it back to the house without further incident. 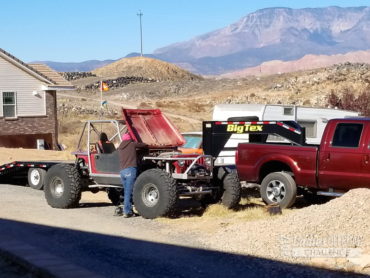 The next morning, we went to Sand Hollow to check out some of the course and test our rigs out. Typical Utah desert winter, it’s freezing in the morning, gets comfortable for a few hours, and then goes right back to freezing. Kristin was amazed to learn we have a buggy law in Utah, allowing me to drive my rig from the rental house to Sand Hollow. It’s cold driving with no windows though. I noticed during the day that my brake line was starting to leak again so I kept checking the fluid level and hoping it wouldn’t get worse. We got registered for the event that evening and at least I went to bed early so I would be the best I could be the next morning. 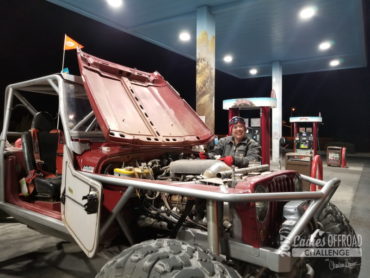 The morning of the event, we drove in the dark to Sand Hollow, stopping for coffee at the Maverick and to top off gas, fill a gas can, and pick up more brake fluid. I was nervous that I wouldn’t have enough with my 15 gallon fuel cell and was thankful Kristin had brought a can with her. It was always fun stopping at the gas station with my buggy to see the looks from other customers, along with the thumbs up and even a few comments. Kristin and I felt like the popular girls, which helped offset the fact that we were freezing!

It wasn’t long before we were at the start line. We had determined that we were going to stick with Charlene’s Jeep and stay together since the course was not a race. So, after our start, we waited a few minutes until her start (her Jeep was in a different class) and off we went. I soon realized that I had forgotten to turn my hubs and we had a few laughs over my rookie mistake but we still made our first lap of the entire course (around 35 miles) with no issues. Kristin was following our course on a downloaded map on her phone and although we made a couple of wrong turns, we did pretty well. 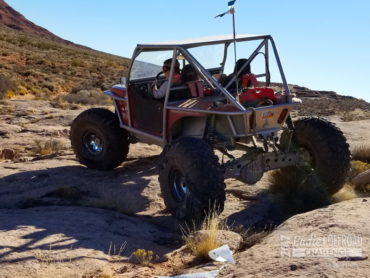 The second lap of the course included the challenges. The first one was my favorite, the rock crawling challenge. Redroxx and I were super comfortable here so I told Kristin to just stay in the Jeep as I didn’t need any spotting. We flew around the course, and later found out that we were the fastest to that point, which left us cheering. Charlene and Jessy did great as well.

We were super positive driving over to the next challenge which was the blind driving skill. This was not our best challenge and the radio cut off at the wrong time. I didn’t hear Kristin’s instructions so ran over the banner and it gave us a penalty. Charlene and Jessy did great but I think Charlene felt the same way I did driving with a blindfold. I wanted to keep going, thinking I wasn’t even close to the end and everyone had to yell at me to stop, or I would have driven off the edge of a ravine. 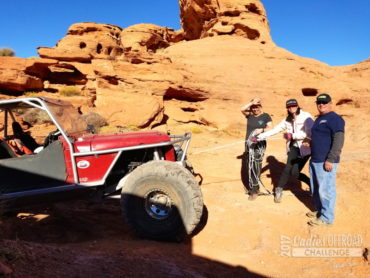 Heading over to the winching challenge, Kristin was really thinking through what she did or didn’t do at the blindfold challenge. Another thing I learned at the Rebelle Rally is that you will make mistakes but the best thing you can do is let it go and focus on the next thing. So, that is what we did.

The winch challenge was a dead pull from the bottom of a big obstacle wall. We made a plan on how to do this quickly. Kristin had the hard job of running to the base of the obstacle, throwing up the winch line, then climbing the obstacle to get it connected. She had to untangle the winch line and then spot me and cheer until I reached the top, where I could put it in gear and drive quickly to the finish. The workers at this challenge let us know that we had finished it in the shortest time. We were thrilled. 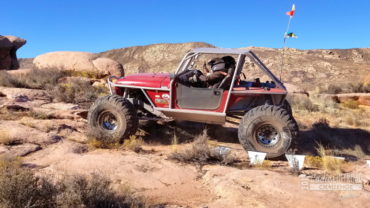 After driving down, or running/falling down the sand dunes and singing lots of funny songs about cows, we made it to the off-road race course. This was basically two laps around a 2.5 mile loop, the bumps and turns were incredibly rough. I think I was off my seat more than on it while we raced. Kristin was absolutely calm and even tried to film while we were racing.

The final challenge was the paintball shooting, or I like to call it the “Thelma & Louise” challenge. Kristin was a dead eye and hit all of the targets while I tried to get through the course quickly. I think ours was the only team to hit them all. After this challenge, we made our way back to the finish line feeling pretty good about our day. I was also really glad that my buggy held together and that I didn’t lose my brakes! 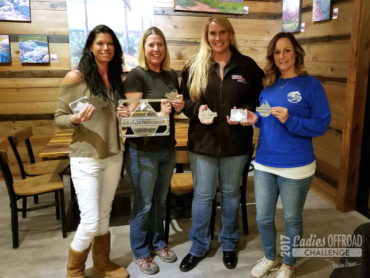 After a few photos and a Facebook Live (watch here), we headed home and warmed up then headed over to the pizza place where the award ceremony was. Kristin and I took first place for both our class and overall! We were so excited.

The next morning, we loaded up and headed our separate ways. The whole experience was great and my my main lesson learned is that, no matter where you think you are in the motorized world, there is always room for new opportunity and a chance to expand your skill set and knowledge base. As ladies in the Off-Road world, we need to constantly push ourselves and set goals but we should also find someone that pulls us into something we haven’t considered or tried. I do this regularly in Moab but have not really had anyone do it for me so I am very grateful to have competed in the Fury Rode and to have developed a friendship with Charlene, Kristin, and Jessy.

Click here to see all the Ladies Offroad Challenge coverage.