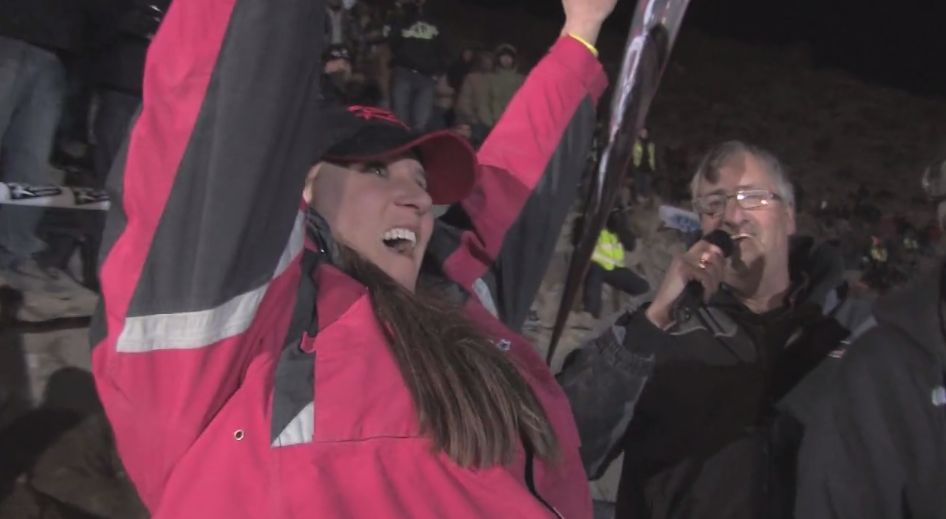 Charlene tells her story about getting to race the Backdoor Challenge at King of the Hammers, and how she became the fastest girl up backdoor.

Let's set the scene.  The 2014 Griffin King of the Hammers is one of the largest off-road events and this year they added a new "fun" competition called the "King Shocks Backdoor Challenge"  Limited to only 50 competitors, it was meant to be a competition of "east vs west" or "rock bouncers vs Ultra4 vs RockCrawlers".  The big question is who would be the fastest. Here is the original post by Ultra4 explaining the event: CLICK HERE

Here are a few facts to paint the picture:
1. I’ve never raced anything before.  We can take that one step further to saying, I have never seen a green flag and hit the skinny pedal.

2. I’ve never driven up the obstacle Backdoor as a passenger…muchless a driver until the Saturday before the event.  Sure I have taken hundreds of pictures, but that doesn’t mean you can crawl it.

3. I was driving an everyday crawler.  Is that fair?  How about a 4 cylinder YJ that has slowly been stripped into an AZUndertakers proven tube buggy.

Yes, that makes the decision to compete at this fun challenge even crazier!

We drove onto the lakebed Friday to set up for the week of helping racers.  Mid-afternoon Matt came and put me into the buggy – “Time to show me you can do this!”  I went up Backdoor as a passenger and learned the passenger line; I got out and watched Matt go up it once and learned the drivers line; then I came back around as a driver and pulled up to feel the angle, gave it a few tries and made it up; went back around for a second try and ONE SHOTTED IT!  Whoooohoooo!  Talk about some self-confidence.  I was ready.  Well, maybe not quite yet.  We went back out on Saturday night so I could run it at night with a group of hecklers and a helmet on.  I could feel the adrenaline and put a few laps on the ‘ol Backdoor.  I got this. 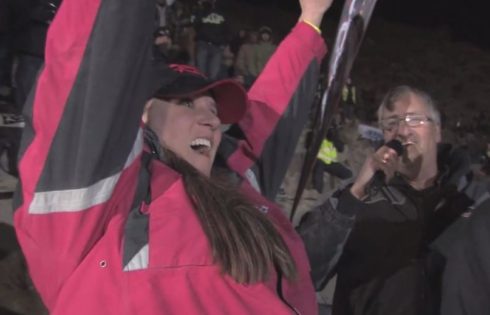 When Monday came, I was crazy busy chasing racer boys around the lakebed trying to get work done. (Yes, it’s what I do)  I almost lost track of time but headed into the drivers meeting and then raced back to the trailer to get the buggy final prepped.  Final prep: Stickers of course!  BFGoodrich, Raceline Wheels and WARN, plus the fancy Bower Motorsports Media banner duct taped to the top – thanks to Matt for the touch of Pink J  And we were loaded and headed to staging for the King Shocks Backdoor Challenge.

I think I peed 5 times, maybe more. I was nervous. The Backdoor canyon could be described as a scene from a medieval fight arena. To take my mind off things I decided to hike up the canyon to talk to Raceline’s Greg Mulkey and Tim Lund who were announcing. That was a bigger feat than I thought, but I took a bag of koozies and they worked perfectly as bribery: “Here, I am paying ahead to make sure I don’t fall”.  Anyone that has walked like a billy goat on the side of a mountain with hundreds of people (or goats) in the way can attest to this feat.  I made it and back safely.  Then I took my mind off things by cleaning.  The jeep was really, really clean.

It was finally time to buckle in.  Time to go.  What in the world am I doing?  I rolled down to the start line. 3-2-1-GO!  I went faaast!  I’m not sure if you can tell in the video, but I was speeding along to the base of the waterfall.  I lined up perfectly.  I hit it, but not enough. Dangit! I waited for the buggy to settle, put it into reverse and went too far down! Dangit! Rolled up, and again the 4-squirrels weren’t there.  I backed down again, knew that this was my last chance………and it crawled!!!!!  I made it up!  Slammed into the rock at the top, went around to the right hand climb, walked right up it and then sprinted to the finish.

The volunteer at the finish line has THE STORY.  He came up to the buggy and asked if I knew what my time was.  “I don’t care!  All I care about is I get to talk to you right now and that means I made it to the top!!!!” The end result was a not so awesome time because of all the backups, but I made it up, and within the set cutoff time.  That was my goal, that was my accomplishment.  This gave me the title of “Fastest Girl up Backdoor” - I’ll leave it at that because we have all been having a lot of fun with that name…