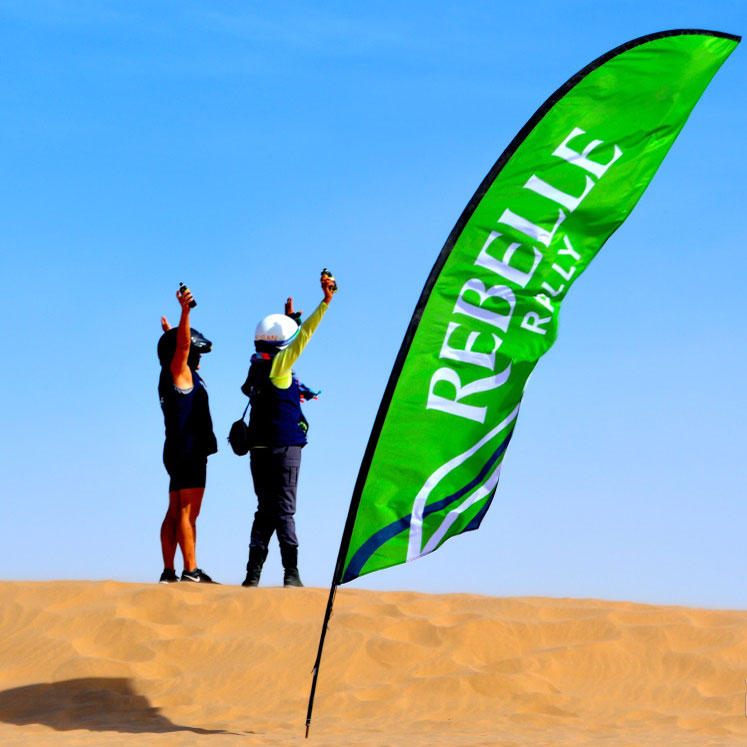 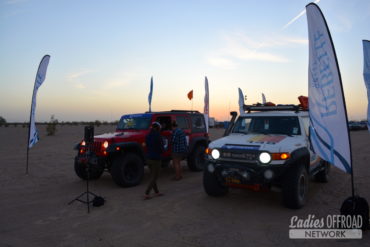 The challenge with hosting a competition is making it similar enough to the year before for everyone to want to participate, but different enough to keep everyone on their toes and not have a leg-up on the newer competitors.  “It’s significantly different from last year,” said Emily Miller, creator of the Rebelle Rally.  “We went from 4 base-camps to 3, we added more driving challenges and we threw in more curve-balls in the checkpoints.”

Watching it from the computer screen for the first part of the week, that wasn’t apparent. The trackers don’t communicate the story or the terrain, just the circles that the ladies are traversing in. On the ground at the event during the final days of competition, watching as the ladies navigated the Glamis Dunes, the curve-ball checkpoints were clear. It made me giggle. 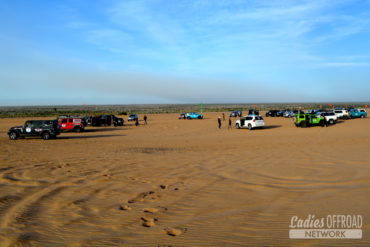 Having competed and successfully climbed the points ladder to the 1st position in the inaugural year of the Rebelle Rally,  it was great to be back. The choice not to compete had to do with the 2017 Ladies Offroad Challenge attending the 50th Anniversary of the Baja 1000 a short three weeks after the Rebelle Rally.  The rule of having to be offline would leave me unavailable to manage that event for the length of the Rally, making it a business decision.  It had nothing to do with my personal want or desires.  Trust me, I would compete in the Rebelle again in a minute!

My goals were simple this year – to support every lady that took on this wild adventure and shake their hand at the finish line.  Ok, so most all of them got hugs!  A finish is the goal.  A finish is a win.  A finish is a life-changing moment, especially in this event. 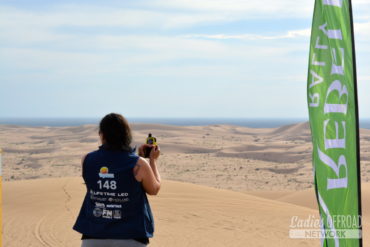 I came late to the game; joining up with the Rally as they hit my favorite place, the Glamis Sand Dunes. Their second to last checkpoint on Day 6, was Osborne Overlook, a place where you can look out and see dunes go on forever. I could close my eyes and hear my 2-stroke running the dunes following my friends. :clap: But not today, today a group of ladies would be checking into a green flag – most not even looking up to appreciate the beauty.  Some, even fearful of the dunes magic.

It was awesome to see those that I knew, trying not to throw them off their game, I stood off to the side taking pictures and appreciating their moment.  Airing down, putting on flags, feeling pushed and on a time schedule.  As the sun set and it started to get dark, all the ladies passed through the checkpoint and it was time to head to base-camp.  I parked on the staff side and set up my fluffy bed in the backseat of my truck. No tent requirement for me! 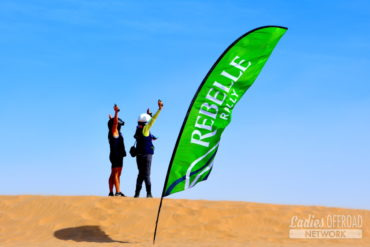 Dinner was as excellent as I remember.  Drew Deckman and his crew working out of the truck was amazing.  I found a table and sat with ladies I didn’t know.  I wanted to learn about them. Team 150 and 151. They were fighting to not be last place but were giggling and shaking their heads through every sentence.  These ladies are the spirit of the Rebelle Rally.  One was 78 years old, Mom to one of the course builders.  One hated maps and twitches at the thought of reading one, she is the navigator.  One had only ridden dirt bikes.  One knew they were way in over their head.  All were laughing and appreciating their successes!

The dinner atmosphere was different from last year.  It was loud.  There was a buzz of talking.  I asked a fellow ‘original Rebelle’ if I was noticing correctly and she said that it had been like that all week.  Our best guess, everyone had gotten to know each other over the year through social media so it was more of a group of friends, than a group of strange acquaintances. 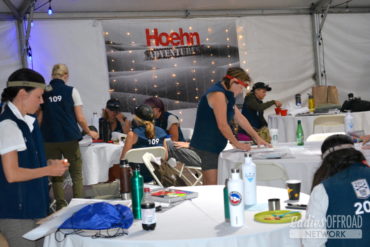 I’m not going to lie, I didn’t miss the 4:30 AM wake up calls.  I knew the first twist of the day from the staff meeting the night before. It was fun to look around the room at the facial expressions as the rules and scenarios were laid out in front of the competitors at the 6 AM meeting. Today was the day. The get stuck or power out. The win it or lose it.

It was different watching the GPS tracking the ladies and waiting at the checkpoints as they came up. Some had determination in their eyes and others had the enjoyment of success. The point’s battle for first became intense. Where the leaders had been within a 10-point range all week, it was now jumping around, considerably.  My added view of the on the ground actions next to the tracker and the points jumps made the experience 100-times more enjoyable. 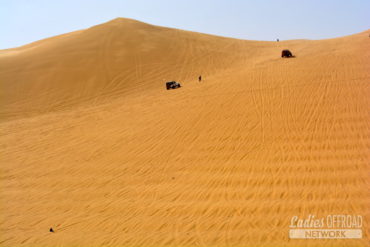 Our media chase truck headed to Oldsmobile Hill. It was a busy Friday. The weekend before Halloween, and although windy and rough around the edges, it was still a warm and pleasant day. The hill was being raced by high horsepower sand cars, UTVs of all cc’s and dirt bikes with little kids at the throttle. As the teams came into the valley, they spotted the flag at the top of Olds. It was going to take throttle and guts, it was a driver’s flag. Some turned away not wanting to race the sand-cars. Others went as far as they could and the poor co-driver had to get out and finish the hike up the hill! My challenge was standing there motionless, not being able to encourage them to “go-for-it”!! Those that did try came back with a smile. 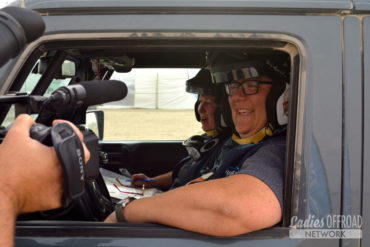 I finished the day back at Base Camp.  I wanted to be at the finish line when everyone was coming in to congratulate them on their finish.  A finish is a win!  I missed the first group of finishers so I wandered through the tent when I first arrived back to say my congratulations and give them all hugs. Then I went back out into the wind, with gusts up to 40 mph.

It was a great time getting to see everyone as they came in. The range of emotions was intense. From giggling and grunting stories to sobbing in appreciation. From hugs and tears to high-fives and laughs. Each team was different. Each person was different. Everyone took away a different life-long lesson, guaranteed. 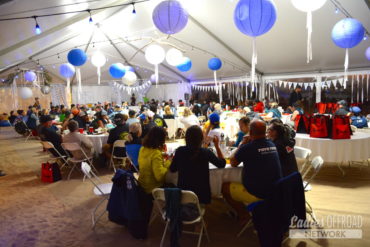 The dinner tent was even louder on the final night. Everyone crowding around a table. Phones back in their hands. Celebration beers and booze hopping table to table. Cameras were out and pictures being taken of new groups of friends.  Emily Miller grabbed the mic for her final ‘in dirt’ announcements to thank everyone on staff that had helped with the Rally.  The applause and hollering was genuine and long.  As the list wrapped up, the final Thank You was to Emily Miller with a standing ovation for the excellence that this Rally portrays.

The music started and the dancing hopped well into the night.  The final night in a tent turned into the awkward early morning of wanting to sleep in but your body being used to waking up early everyone was cleared out and headed to San Diego by 9 AM. 31 competition vehicles and more staff vehicles pulled off of the dirt for the final time and out onto the asphalt to navigate by a phone map to the next stop: The Gala. 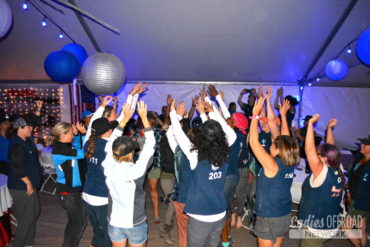 Congratulations to Kaleigh Hotchkiss and Teralin Petereit for winning the 2017 Rebelle Rally in a Unlimited TJ, by a mere 2 points after 7 days of competition! With this win, Kaleigh also adds the prestigious title of 2x Champion! Nena Barlow and Chris Mayne took second, and Nena also added the prestigious title of 2x Bone-Stock Award for driving a Ram Powerwagon Truck to the top of the class.  Emme Hall and Rebecca Donaghe took third in a Bone Stock Chevrolet Colorado ZR2. Cora Jokinen and Melissa Fischer finished fourth in the Torq-Masters Unlimited LJ. Michelle Laframboise and Elise Racette from Canada took fifth in a Jeep JK Rubicon and won the coveted International Cup award. The French BFGoodrich Tires team of Syndiely Wade and Melanie Baudin finished 12th, and earned the Team Spirit Award for helping multiple teams recovery efforts throughout the competition.

Congratulations to Jaimy Grigsby and Lori Arterburn who finished first in the X-Over Class in a 2017 Jaguar F-Pace. Second place went to Meli Barrett and Sabrina Howells in a 2017 Honda Ridgeline and third place went to Elizabeth McLaughlin and Marty Lawrence in a Subaru Outback.

See all the 2017 Rebelle Rally Coverage compiled at www.ladiesoffroadnetwork.com/rebelle-rally

Will you be competing in the 2018 Rebelle Rally?