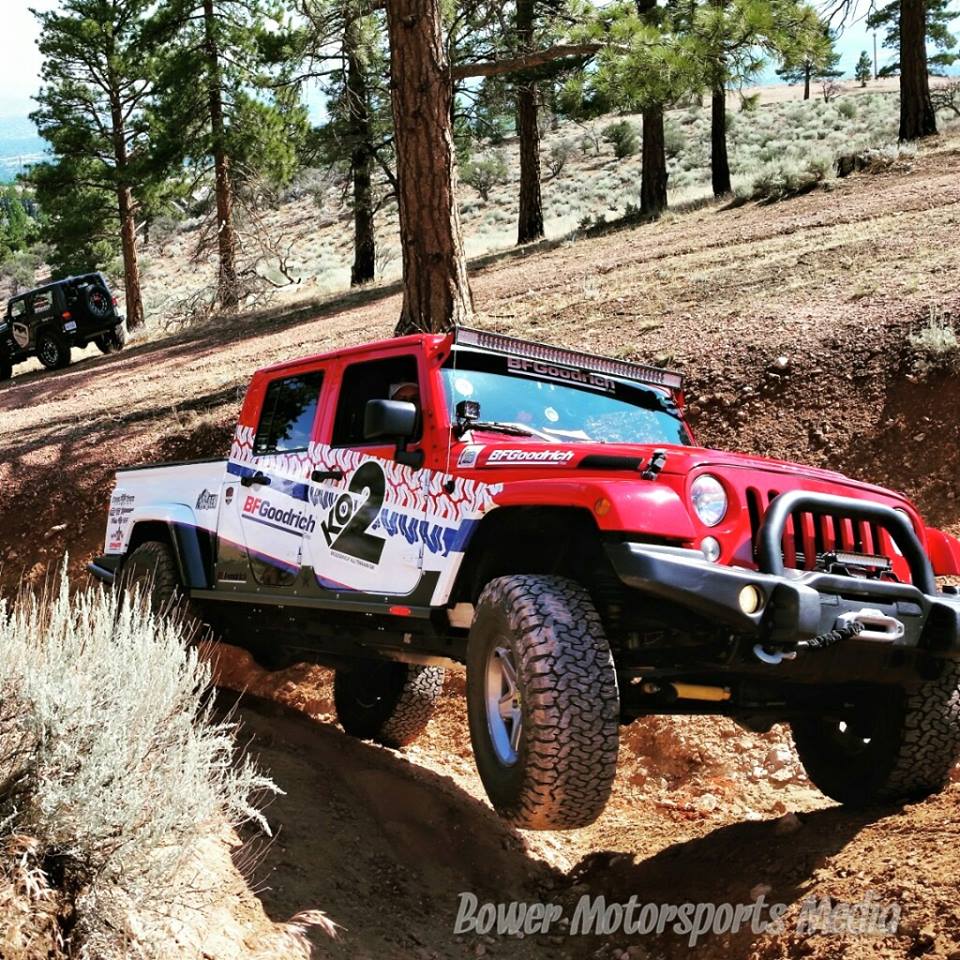 Charlene tells her story about participating in 2015's RallyVenture Adventure in Reno, Nevada. 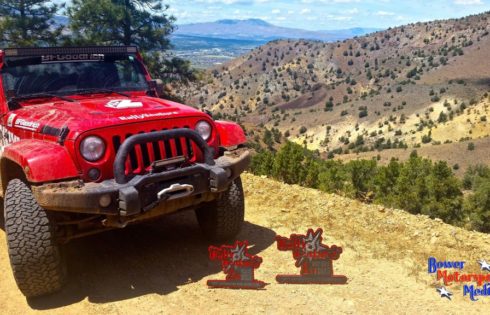 As some of you who track our social media know, I recently got back from RallyVenture: a very difficult two day, 200 plus mile, navigation based, social media competition based out of Reno Nevada.  This is a new event and concept in the world of off-road, so I will admit to going with an agenda:

First: to make sure our team didn’t need anything out of our “go bag” which is a bag of items that you would need in case of being stranded including matches, blanket, chapstick, etc.

And second: to see if this is an event that the everyday jeepers could participate in, or if it was something that was only for high-level jeepers.

So here’s my story….
BFGoodrich ran a social media contest for a person to join Carrie, from BFG and myself, in the Brute.  Karl Hannah, from Sacramento and his brother Jeff happened to be the lucky winners.  Little did they know what they were about to get in to. In fact, they had very little idea of what was about to happen.  Anyways, the rest of the BFG team included Jordan from BFG, Brian Finch another performance team member and Sung the BFG social media agent, driving in Ruby. There ended up being 5 of the BFG Performance Team members participating at RallyVenture –there was Brian, John Williams, Larry McRae, Del Albright and myself.  It was actually pretty cool to have such a great group all together. Wednesday we all arrived in Reno and met up at the Nugget in Sparks, Nevada.

The Wednesday evening cocktail party, dinner and start drawing was fun and casual.  There were 24 teams entered, most of which I knew, and a few that I didn’t (which made it fun). Our team number was 14, oh and I guess I should mention that we finally decided on a team name of the BFG Rough Riders!

On Thursday morning, there was a lot of anticipation. We didn’t really know what we were doing or if we had the right tools, but we jumped right in anyways. Carrie drove, Karl was navigating, and I was in the backseat in charge of the social media posts as well as acting as driving and navigation coach.  The number one thing that could not happen was us getting lost or breaking the Brute.  Can I just say, again, that there was nothing easy about this event?

Thursday was pretty cool because there were some added elements to make bonus points.  We got to shoot guns, use a bow and arrow, and Karl earned our team a bonus point with the fastest time in the kayak race! Yes, seriously a kayak on a lake. On the social media side, we had to make our own “Blaire Witch Project” movie then load it to Facebook.  If you haven’t seen our submission yet, you need to go to Bower Media’s Facebook page and find it.  It is hysterical!! Those are just a few of the things we had to do to earn points throughout the day.

When we pulled in at 6:45, late for our dinner reservations, my phone rang with Jeff telling me there had been a tie for first place AND that we had won the tie breaker. We took the day’s win! Don’t ask me how it happened, because I have no idea! Slow and consistent is all I can say. I jumped out of my seat in middle of the restaurant, kicked the table by accident, and then told the whole table (ok maybe the whole restaurant) that we had won the day!! High fives and hugs were exchanged around the table! We were all pretty stoked!

Thursday wasn’t over yet, we still had the Raceline Rodeo and I was one of the judges!  I took a quick turn through the shower and headed back down to Gillies to whoop it up.  The bull riding was hysterical, some of the guys never been on a bull before. Chris Rea clearly stole the show with his Magic Mike-esqe ride where he whipped off all his clothes! Up next was the Buckle Bunny Contest, our very own Jordan got into the mix of this, and won!  It was so much fun!

Friday morning came too early. We had to do our best again, which I guess was just staying slow and consistent like the day before.  We did okay, but there weren’t any bonus points unlike Thursday, so we had to be on task with everything we did.  Time does play a huge role in this event.  It’s like an enduro where you don’t want to show up early, but there is also a cut off time. 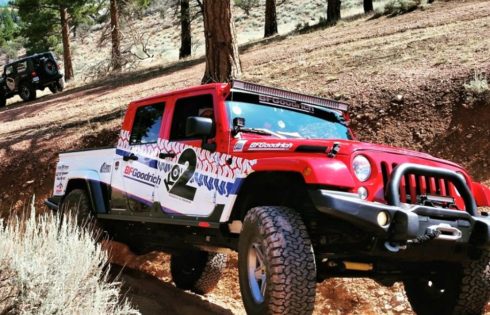 In the afternoon section we were getting behind and it was starting to get late.  We made lots of u-turns and our mileage calculations were off.  I knew that we really had to start picking up the pace or we were not going to make the cut-off time. 4pm came and went, 5pm came and went and trust me it was 2 long bouncy days of Nevada rock and we were all ready to get out, but we had to finish.  6pm came and I was starting to get anxious.

After Texting Jeff at 6:15 to confirm our 7:00 pm cut off time I knew that now was the time to kick it into gear and finish this.  We made two more navigational u-turns and I told Carrie, at 6:35, that I was driving now. I told Karl not to get me lost again, the last two days of his navigational, and co-driver training was over. It was either now or never.  We either win or lose. I don’t think any of us can say that I’m not competitive!  We got lost a couple more times, and there were some very loud words spoken in the Brute. We’ll just leave it at that.

I then baja’d the poor Brute down the hill into town. Karl was calling turns, Carrie was calling time; and I was on a mission. I’ll tell you what; the BFG KO2’s really did their job as I two footed it down the mountain.  We finally made it to asphalt, at 6:47, and did the fasted 2-wheel drive switch all weekend. We drove the streets to 4 Wheel Parts, with three of the longest red lights ever. When I pulled into the driveway, honking, at 6:56 we still had to jump out, take yet another selfie, post it on Instagram with all the proper tags, and then run into the store and check in.

We did it.  We all jumped out to take the picture, and then I jumped back in and moved the Brute out of the way of other teams trying to finish. I then posted the photo on Instagram and ran into 4 Wheel Parts and said, “Team 14 Checking IN!”  I will never forget my friend Keith’s face from behind the desk where he looked at me and said, “Never without a little bit of drama Charlene”

I frankly didn’t care what our point standing was, ok maybe I did a little bit. But, then again, who had known that we were even in the running the day before.  I walked back outside so the judges could do their points thing, and then…I saw it.

Oh no! The Brute’s fender was lying on the ground next to it. I had no idea I had driven the fenders right off the Brute. Whoops! We quickly loaded up the fenders and headed to the hotel. The awards party had already started; we were late…again. After a quick shower and half hour later, the team BFG Rough Riders made their appearance to learn the fate of the day and the overall win.

Looking around at all the teams, it was funny to hear the stories.  Some were grumpy about getting lost, some were laughing about this or that. What I saw was a room full of type A, highly competitive personalities, laughing and having a good time together.  Sure, it wasn’t a race necessarily, but it was a competition. Everyone wanted to win.

At the awards ceremony, the BFG Teams did awesome.  Our team got first for Day 1 and Poison Spyder’s team got first for Day 2.  The BFGoodrich Vintage team took 3rd overall, and we tied for first overall!! After the tie- breaker was decided, our team took 2nd place overall. A huge congratulation goes out to brothers, Brian and Chris Crofts, who we were in the tie with on both Day 1 and for Overall – well deserved guys!!

Soooo….
Lets go back to answering my agenda items:
The first was not to use anything out of our go bag – check!  Although I do wish I that had a dry pair of socks after I rolled off a log into yucky swamp water trying to get a photo!
And second, could an average Jeeper do this event. My answer is yes; I feel that a mid-level Jeeper that has a competitive spirit and is a little tech savvy would have a great time at this event.  Clearly we didn’t need a fast vehicle or fast driver to win it.  All we needed was consistency. However, I would not recommend entering with a stock vehicle, you definitely need to have at least the minimum upgrades. I would suggest doing your homework ahead of time….but that is all I am going to tell you, because I want to go back next year and get another one of these fancy trophies.

I finished off the weekend by getting the Brute ready for street driving on Saturday.  I swung by Discount Tire to get it aired back up, stopped by David and Barbara Rainey’s house to pull off the second inner fender well, and destroyed a stall at the local quarter car wash with mud clots. What I didn’t have time for was going back out on the trail to grad the second fender. I felt really bad about leaving it out there as trash on the trail, so I decided to post a bounty for it while I was at dinner at 8pm, and by 11:11pm it was off the trails thanks to Aaron Litz (who is now enjoying a very fancy Bower Power Hour Shirt, BFG socks and some other goodies). Sunday was an early morning drive to Salt Lake City to deliver the Brute for it’s next adventure, with a quick stop at the Bonneville Salt Flats. It was just another event on the road.  Never a dull moment with Bower Media!

Thanks again to BFGoodrich Tires for the opportunity to be part of their team and to Jeff, Angie and Cody Knoll for their countless hours in producing this challenging event.